IoT Adoption: Before and After COVID-19

New survey data from the Eclipse Foundation on Internet of Things technology adoption provides an interesting pre-pandemic outlook on the digital transformation of industry—an outlook that could change significantly over the next year.

The survey data I’m referring to comes from a study conducted by the Eclipse Foundation about the adoption of commercial Internet of Things (IoT) technology. The aim of the study was to get a better understanding of the IoT industry landscape by identifying the requirements, priorities, and challenges faced by organizations deploying and using commercial IoT technologies. More than 350 respondents from multiple industries responded, with about a quarter of respondents coming from industrial production businesses.

While this survey was not solely focused on the manufacturing and processing industries, its results reflect the general business community’s IoT adoption at the end of 2019. As such, it is a pre-COVID-19 snapshot of IoT adoption.

For the Automation World audience, six data points in the survey are of particular interest. These six factors fall into two categories: technology focus and spending/adoption plans.

Ranking of importance of technology components in IoT solution. Source: Eclipse FoundationThe IoT technologies of highest importance (including those ranked of high and medium importance) were sensors at 84%, data processing & analytics at 77%, and cloud platforms at 76%. The lowest ranked technologies still scored fairly high, but the distinction between the lowest and highest rankings shows where efforts are initially being concentrated. The lowest ranking technologies of high-to-medium importance were user interfaces at 73%, edge nodes/gateways at 72%, controllers at 71%, artificial intelligence (AI) at 67% and actuators at 63%.

Seeing AI come up so low shows that many companies are either not ready for that level of IoT implementation or are unsure of the efficacy of current AI technologies. Given what I heard about AI at the recent TechCrunch event, it may be a good thing that companies aren’t jumping into the deep end with AI just yet.

Likewise, the lower level of interest in IoT-enabled actuators shows that most users are either not yet that interested in connecting the last mile of devices to IoT systems or are more focused on completing higher level applications first.

As much focus as data analytics is receiving in all things IoT, it’s interesting that the Eclipse Foundation’s survey showed that the highest ranking concern about IoT technologies is data security, with 26% of respondents noting this. Yet only 17% cited data collection and analytics as a concern/priority. This high level of focus on security echoed industry concerns voiced at a recent PMMI OpX Leadership event that brought OEMs together with CPG companies to discuss specific digital transformation issues. In that meeting, OEMs noted the importance, at this point in industry’s digital transformation, of focusing on “monitoring only” in remote access discussions with CPG end users to alleviate concerns around remote control and data security. 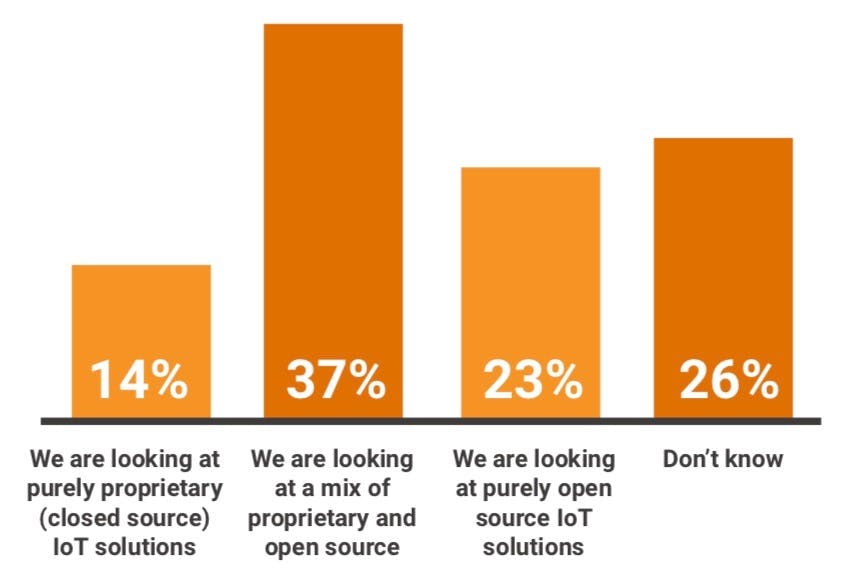 Interest in open source technologies for IoT has been surging over the past few years, as covered in our recent feature article, “Open-Source Software Meets Industrial Automation” and in our recent podcast answering the reader question: “Is Open-Source Software a Good Choice for SCADA?” So it was not a surprise to see that responses to the Eclipse Foundation’s survey showed that 60% of respondents are factoring open source technologies into their IoT deployment plants.   Of course, it can be argued that respondents to a survey by the Eclipse Foundation would naturally be more interested in open-source technologies, but the general interest in the topic we’ve seen from our audience (based on traffic to specific content), as well as the development of industry consortiums such as the Open Process Automation Forum and the Open Industry 4.0 Alliance spotlight industry’s changing attitude toward open-source technologies. 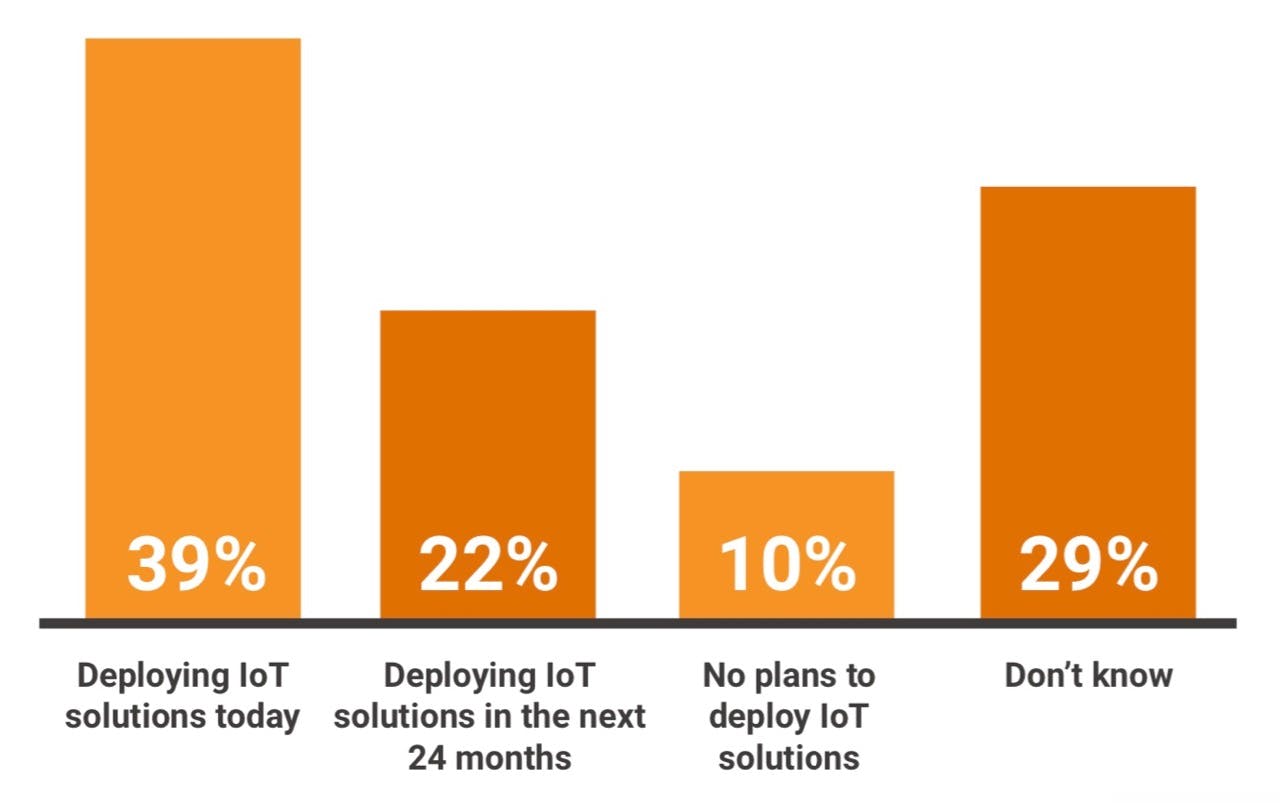 Future plans for deploying IoT solutions. Source: Eclipse FoundationAccording to the results, 40% of respondents planned to increase IoT spending in the next fiscal year, with 36% saying they don’t know or have no IoT spending planned. These data points are in line with the survey’s question about the current and future status of IoT deployment plans. Here, 39% of respondents said they are deploying IoT technologies today, with 22% saying they plan to in the next 24 months, and 39% indicating they don’t know or have no plans in place to deploy IoT technologies.

This nearly even split among those who plan to spend more and those who don’t know or have no plans to spend on IoT is reflected in the fairly low amount of planned spending on IoT in the next fiscal year. According to the survey results, 30% plan to spend less than $100,000 on IoT in the next year, with only 12% planning to spend more than $1 million. And remember, these numbers are from before the pandemic.

After-Effects
What all this means for the business post pandemic remains to be seen. At this point, it’s far too early to tell. Early indications remain positive, as reflected in a survey of CPG manufacturers conducted by our sister media source Packaging World.

The fact that nearly everyone is largely homebound in these early days of the pandemic—and still needing to eat, of course—does put food and beverage manufacturers in an enviable position compared to many other businesses. However, even this industry is having to adapt, as 45% of respondents indicate that their supply chains have been disrupted.

In addition, responses to the Packaging World survey show that 38% are now working from home rather than coming into the office and 19% are either in process or planning to refit or retool operations to help provide respirators, masks, or other critical healthcare materials relevant to suppressing the spread of COVID-19.

In the absence of large-scale federal coordination of industries to respond to the pandemic, the after-effects on industry are impossible to forecast at this point. But there are some indications that the pandemic could be a turning point in the digital transformation.

Though not focused on industrial operations specifically, a recent article in Forbes notes increases in telecommuting, virtual events, and use of cloud platforms to adapt operations in the face of COVID-19.

My current inclination is to think that current events will ultimately escalate the digital transformation as a hedge against the kind of potential disruptions we now know are not just abstract possibilities.

Is easier to integrate and use for any type of industrial application
IDEC Corporation
Mar 11th, 2022

OMAC, The Organization for Machine Automation and Control, has formed a Workgroup to be comprised of end users and service providers to create a comprehensive best-practices handbook for remote monitoring services.
PMMI, OMAC
Jun 29th, 2020