Always focused on quality, the nut processor upgrades its inspection line to prevent walnuts from being damaged in any way.

With a strong background in farming, the Foppiano family has a long and rich history in San Joaquin County in the Central Valley of California. In fact, the family has worked as farmers in California for more than 150 years and began planting cherries during the California Gold Rush. In 2001, the Foppianos founded Morada Produce and expanded to products such as bell peppers and onions. The family also operates Morada Nut Company, which it established in 2010, focusing on shelled walnuts. Today, Morada Nut grows, handles and ships premium California walnuts to customers around the globe. It specializes in Chandler, Howard and Tulare variety walnuts grown in Linden, California, an area known for excellent nut quality.

“The international and domestic markets for walnuts keep increasing year to year,” says Mike Jameson, Morada Nut’s director of sales and marketing. “This increase is likely contributed to the health benefits of this wonderful nut.” Research studies say walnuts are heart healthy and contain high levels of antioxidants, making them and other nuts a perfect match for the burgeoning healthy and natural consumer food demand.

Due to the booming nut-production industry in California, Morada Nut Company began shelling the walnuts it had been growing and packing. After careful research of walnut-process technology; partnering with growers on the California Walnut Board (consisting of more than 4,000 growers and 100 handlers) to learn more about technology; testing; and retesting products and equipment at other major manufacturing facilities, the walnut processor decided it was time to expand its operations.

This expansion project required detailed planning, testing, engineering and construction as well as hiring and training employees. Grossi Fabrication, based in Hughson, California, builds walnut nut hullers and shellers, and designed and built a multihead walnut sheller to double Morada Nut’s production output within five years. This aggressive growth strategy required machinery that was modular, compact, easy to operate and maintain, and able to withstand stringent processing schedules, according to Mike Durrant, vice president of operations at M Parise Associates, the firm that provided engineering services to Morada Nut on this project.

After the walnuts are shelled, product is placed in plastic bins to be stored for optical inspection. Always focused on quality, Morada Nut needed an inspection system that would prevent walnuts from being damaged in any way, including breaking or even scuffing.

The processor decided to collaborate with M Parise Associates, Meyer Industries and TOMRA Sorting Solutions to design the new line. Morada Nut uses a Meyer/TOMRA laser cascade system to accurately, efficiently and gently remove foreign material and defected and off-colored walnuts from a product stream of up to 12,000 pounds per hour. “Using multiple sorting technologies simultaneously, the system ensures that this delicate product is handled with ease, and transitions are decreased to prevent any unnecessary scuffing or damage to the external skin,” states Scott Brown, production manager at Morada Nut. “This leaves the product aesthetically pleasing visually and shelf stable for longer periods of time.”

Beginning with the feed system, the nut processor installed a Meyer sealed bin dumper that provides gentle transitioning of product from the holding bin into a hopper that feeds the optical sorting line. The sealed bin dumper works by placing the bin into a hold; a lift then raises the bin and seals it to a lid that contains the product and helps prevent cross-contamination and contains the product during the tipping. The bin then tilts to a feed position, at which point the lid opens up to discharge the product.

A 4-in. transition between the bin and the hopper slide wall helps prevent walnuts from breaking during the dumping process. The product is released into a Meyer screening conveyor, which helps remove the fines and walnut meal, a fine powdery walnut residue that is created when a walnut is damaged. The walnuts drop from the bias-cut shaker to evenly feed a 24 Simplex bucket elevator. The elevator lifts the product almost 30 ft. in the air before the product is discharged and sent through the optical sorters.

Each sorter is configured to detect different defects in succession in order to take advantage of technology efficiencies and to create reject-recovery product that is more uniform and simpler to handle during later recovery of good product from the rejects. This has saved tremendous labor expenses, according to Durrant.

Once the walnuts have gone through the three Nimbus BSI sorters, they transition to an accept-deceleration shaker that helps slow the product and prevent the walnuts from crashing into each other and breaking on the final discharge. The accept-deceleration shaker then feeds a final surge shaker built to feed the tilt-fill, bin-filling system. The surge shaker is designed with two special features: an automated gate that closes to stop the product flow during a bin change and a series of sensors that communicate with the control panel, telling the gate when the bin has been filled and is ready to be replaced. Once the bin is in the upright position and the product has filled, the gate shuts and stops the product from feeding into the bin.

The Meyer Industries equipment also uses a stall mode that continues moving the product in a forward motion, but at a much slower rate, allowing the product to build up a little more rather than overfilling during a bin change. An empty bin is placed in the hold, and a button is pushed from a remote control on the forklift. The bin lifts up onto its side, and, when in the top position, the control panel signals the gate to open and the product to flow in. The product never drops more than 10 in., preventing it from breaking or being damaged during the final bin station.

The platform was engineered and built by Meyer industries and installed by O&M Manufacturing, based in Arcata, California. The team installed the entire inspection line within three weeks, but remained on-site for an additional week to ensure that all equipment was in working order for a successful startup. The entire line uses only three people: two forklift operators and their operations supervisor.

The new inspection line has removed capacity constraints because inspection is no longer holding back production of tens of thousands of pounds of walnuts that can be produced per hour, says Durrant. The new line provides a more consistent reject bin, providing the operations team with a simpler and quicker recovery process.

Food safety is also critical to Morada Nut’s growing business and is at the center of many of the decisions the company makes. “We are very proud of the cleanliness of our facility, and it takes a collaborative effort between our crews, management, food safety department and our on-site lab to achieve,” says Brown. The nut producer reports that remarkably high scores are consistently achieved during third-party audits for food safety and quality assurance. “Removal of foreign material is key to our food safety program and is a high concern for our customer base. The performance of the sorting technologies to consistently detect and eliminate these natural objects, such as pieces of walnut shell and membrane, provide us with a powerful tool,” declares Brown.

Morada Nut Company focuses on a three-pronged approach to sustainability: environmental, economic and social. “Utilizing a science-based agricultural and manufacturing framework, we strive to decrease our impact on the environment while producing the highest quality walnuts and investing in our local community,” says Brown. Examples include its 400 kw solar array covering the facility’s 150 employee parking spaces and an investment in local community agricultural education initiatives.

The walnut industry is fortunate to generate very little nonreusable waste. Morada Nut sources its dust or meal into the oil industry, where it is used in high-end cosmetics and culinary oils. The company also uses its shells as a road base in its orchard and farm for dust abatement to keep the air clean.

“Sustainability has been built into the culture,” Brown states. “Our investment in intentional practices has allowed us to continuously adapt in the growing movement of sustainability, considering it a journey to travel rather than a destination to reach. It is our goal to differentiate ourselves from our competitors and create a sustainably beneficial relationship with our customers, employees and Mother Nature.”

While sustainability is critical in today’s competitive food manufacturing marketplace, production efficiency is the key to success for any processor. Brown says the new line is crucial to Morada Nut Company’s continued growth. “Its throughput capacity and accurate sorting ability increases the quality and volume of product we can produce in a shift significantly,” he explains.

Today, Morada Nut Company continues to look for ways to improve the quality and capacity of its walnuts. It is planning for a third expansion of its walnut-packing facilities as its customer base begins to source variety-specific walnuts, with Chandler variety being in the most demand. 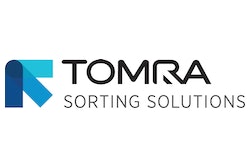 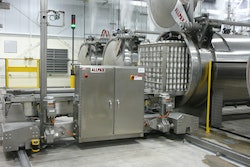 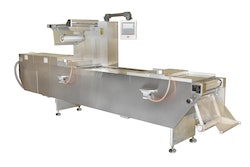 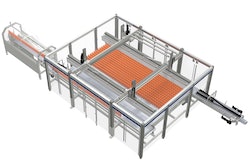