The intersection of IoT and sustainability

Georgia Tech hosts an event connecting the dots between the corporate and societal digital transformations. 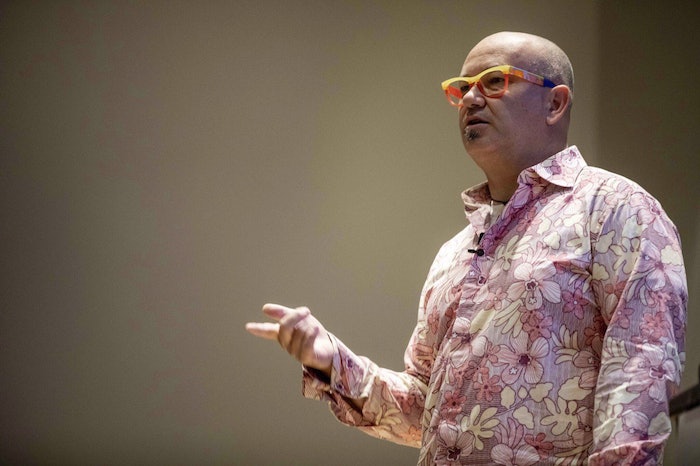 Robert Schmid, chief IoT technologist at Deloitte Consulting, at “The Internet of Things (IoT) for Sustainability Is Smart Business” event.

Last month, Georgia Institute of Technology’s Center for the Development and Application of Internet of Things Technologies (CDAIT) held an international conference titled “The Internet of Things (IoT) for Sustainability Is Smart Business” at the Georgia Tech Research Institute in Atlanta, Georgia. Because the IoT connects a wide range of devices with smart capabilities, it is increasingly seen as a core component of corporate and societal digital transformation, according to CDAIT.

In his presentation at the event, Robert Schmid, chief IoT technologist at Deloitte Consulting, shared a few examples of Deloitte’s experience working with industrial companies to improve profitability through downtime reduction, increased sales and enhanced throughput, as well as through increased efficiencies and reduced waste. The results highlight a credible path forward for businesses of all sizes to improve their operations with IoT-related technologies.

In one of Schmid’s examples, executives at a U.S.-based food packaging manufacturer felt they had reached a plateau with operational improvements and wanted to explore increasing the business performance of their plant through the use of IoT technologies. “Although the plant’s assets already had sensors, the current data being generated by those sensors was not being stored nor [was] easily accessible,” said Schmid. “Therefore, they were unable to monitor operations in real-time and did not have a way to access historical data.”

To address this, Deloitte’s cross-functional team implemented IoT technologies such as a data-streaming architecture, analytics, and sensors to illuminate hidden assets and support condition-based monitoring. The addition of technologies allowed the company to track specific machine performance along the company’s production lines.

“These insights helped the client achieve its vision to improve OEE (overall equipment effectiveness), direct labor and raw material costs, as well as energy usage per good production unit,” Schmid said. “Moving forward, the new sensors and data collection capabilities will enable the client to monitor product quality versus production costs and anomalies that could cause further issues.”

According to Schmid, the anticipated impact of this IoT technology implementation includes a 9 percent improvement in OEE, which is expected to drive roughly $50 million worth of incremental revenue and $20 million of capital expenditure savings in just one plant.

In another example, provided by Schmid, a large manufacturer needed help increasing its output after realizing that running its lines faster wasn’t producing more products. Deloitte’s assistance in implementing relevant IoT technologies enabled the company to achieve a 10 percent increase in operational efficiency without having to add new infrastructure or use more power.

Schmid also noted how IoT supply chain analytics helped a global grocery retailer prevent food waste. “While quantifying food waste is relatively easy, understanding its root cause is complex as the contributing factors of food waste are interrelated, not mutually exclusive” he said. "With double the industry average for food waste, our client wanted to understand and quantify the root causes of food waste in their produce supply chain.”

To provide the retailer with the answers it sought, Deloitte combined and analyzed more than 500 million rows of end-to-end produce supply chain data, conducted field visits to numerous locations, and interviewed employees to identify previously unknown opportunities. With the results of this analysis on hand, Deloitte was able to provide a holistic understanding of food waste drivers and their impact in order to design future state initiatives and a roadmap towards a digitally enabled supply chain, said Schmid. “Our analytics approach helped the client identify the impacts of major root causes, leading to the identification of more than $450 million in waste savings,” he added.

Because IoT is about measuring and remotely controlling things that were until now unconnected, the World Economic Forum believes it could become a game-changer for sustainability because it enables the ability to reach people and objects that technology could previously not reach, according to Alain Louchez, managing director of the Georgia Tech CDAIT.

Referencing Deloitte’s success with IoT implementations, Louchez said it’s becoming easier to see how the promise of IoT is beginning to make a difference in the real world. “However, it is still a long journey. The IoT value chain is complex. It is a long string of many moving imbricated, technological and non-technological links, which require distinct skills, education and training as does their integration into a seamless whole.”

Editor's note: Last fall, Automation World met with Georgia Tech engineering, science, and research experts, who shared their insights on the trajectories and effects of artificial intelligence and machine learning, and how the intersection of data and technology is changing industry. Read about this meeting here.