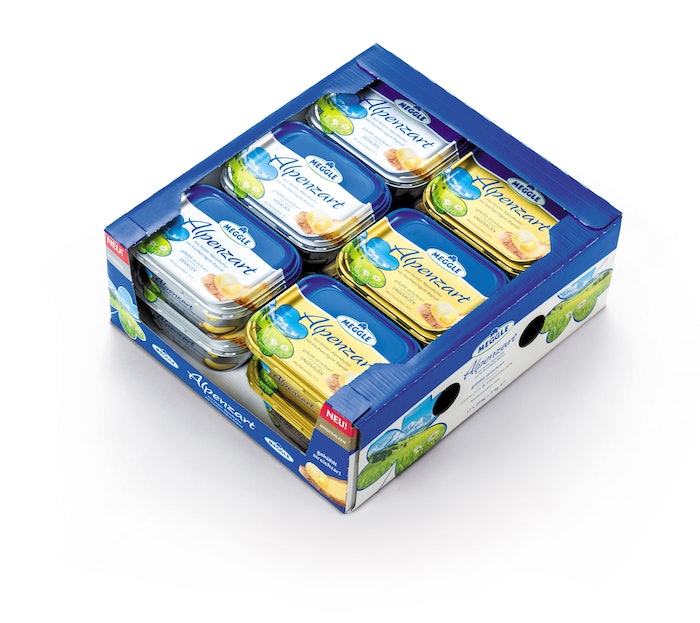 The Zip & Crack case was designed to retailer’s specifications with a folded edge to protect consumers from injury.

Meggle AG is a 125-year-old dairy and whey-processing business group headquartered in Wasserburg am Inn, Germany, a town in the Upper Bavarian district of Rosenheim. Among its consumer dairy products are milk, butter, yogurt, creamers, and more. For years, Meggle has worked with Schubert Packaging Machines for a number of its packaging equipment needs. In 2012, the company turned to Schubert to provide a tray-packing system with mixed functionality for its butter containers.

By 2014, Meggle needed a second system, one that could accommodate both tray packing as well as its retail customers’ demand for retail-ready packaging formats. The equipment also needed to improve the packaging process at various points in Meggle’s production line. Schubert responded with a new TLM packaging machine with four modules that can be easily programmed to erect, fill, and seal cases and trays and can handle different packaging formats and sizes. The new system can pack up to 200 butter containers/min and has an efficiency of more than 97%.

Schubert’s TLM packaging system for Meggle comprises four sub-machines, or modules: a box erector, a grouping machine, a loading machine, and a closing machine. The modules, positioned within four machine frames, are equipped with five robotic arms as well as two TLM Transmodul lines. The TLM Transmodul is a single-axis, rail-based transport robot with contactless energy and data transmission. At each end of the rail section, a turning unit on the Transmodul enables unloaded modules to travel back to the other end on the lower track.

One requirement for the TLM system was that it be able to handle butter containers of varying shapes, including round, square, and rectangular, and sizes from 125 g to 250 g. It also needed to be able to handle cases of mixed product—salted and unsalted varieties, for example.

“Flexibility in the product mix in combination with various types of packaging was essential for this customer,” says Kanellos Tzinieris, Area Sales Manager at Schubert. “It is the only way to ensure that the system operates cost-effectively.”

In addition to supplying the case-packing equipment to meet these requirements, Schubert also worked with Meggle’s case supplier to develop the Zip & Crack retail-ready case. The Zip & Crack, designed according to specifications from Meggle’s retail customers, can be zipped open in the middle and separated, so it can be merchandised sideways on the shelf.

As part of the design, retailers demanded that the case eliminate sharp edges that could injure consumers. Says Schubert, typically in automatic packaging processes where a machine erects, fills, and seals the cases, so-called “open waves” are used, i.e., cases with an open cardboard edge. The cases used by Meggle, on the other hand, feature a folded edge. To produce them, the blank is placed into a folding unit and supplied with glue. The edge is then folded and sealed. While developing these cases, it was especially important that existing machinery could handle the format, in spite of its elaborate facings.

During operation of the packaging line, an upstream machine supplies the butter containers along four conveyor belts. Different splits of container types are possible, e.g., two belts of unsalted butter and two with salt, or three with, and one without salt, or even a single-type compilation. Before reaching the case packer, the containers are conveyed through a metal detector and a weigher, so that containers that are not correctly filled can be discharged.

Parallel to delivery of the butter containers, Schubert’s TLM-F3 three-axis robot pulls case blanks from the magazine. Notes Schubert, the advantage of the F3 robot, versus the two-axis robots used by some other packaging machines, is better unstacking of the cases, where they are not simply removed, but actually stripped with the third axis. Because of this feature, even slightly damp or warped cases do not cause a malfunction. A TLM-F2 two-axis robot then takes the blank, guides it over glue nozzles, pushes it through a folding frame, and positions the erected case directly onto the Transmodul.

As noted, the system at Meggle is equipped with two Transmodul lines. On the first line, the cases are transported while the container formations are created on the second Transmodul line. The containers pass through a Schubert transmitted-light scanner, which detects the contour and position of the butter containers. It communicates this data to two TLM-F4 four-axis pick-and-place place robots, which are responsible for the layered pre-grouping of the containers. (When two TLM-F4 robots work in a machine frame with a control and vision system, it is referred to as a TLM-F44 pickerstation.) The use of image processing is important since, in addition to quality control, it ensures the correct orientation of the print image on the containers.

Once the position of the products corresponds to the packaging scheme, the Transmodul proceeds to the filling area. There, a TLM-F2 robot picks up two container formations from the Transmodul with the help of a suction tool, and simultaneously fills the next two cases waiting on the first Transmodul in layers. In this step, containers are pushed as closely together as possible for placement in the case. Here Schubert takes advantage of the intelligence of the Transmodul, which transports the containers loosely on a plastic sheet. Unlike a product belt, the Transmodul is freely programmable similarly to a robot with regard to movement. Whereas up until this point, it was paired with the other Transmoduls and moved continuously, it now changes to an indexed movement sequence to load the cases.

After a brief stop, the Transmodul moves to the correct position and communicates this position to the robot. A simple mechanism on the robot’s end-of-arm tool then moves the containers together. According to Schubert, the TLM-F44 robot in combination with a Transmodul line is the key technologies at work here. The close cooperation between the two aggregate units makes this simple solution possible, whereas a continuous belt would require a more complicated tool for this step.

After the containers are loaded into the cases, the cases are closed by a TLM-F2 robot and sealed. The cases are then placed on the outfeed conveyor for manual palletizing.

Designed to handle two case formats—12- and 24-ct trays and 12-ct Zip & Crack cases—the TLM can be changed over without manual adjustment and therefore without tools. Only fixed-format parts, which are connected to the machine by way of automatic connections, are exchanged. In this case, power and data are transmitted without contact. Format changes require only one employee. RFID chips in the tool and in the robot arm check the tool and report whether it is in fact the right one.

Another special feature of the TLM at Meggle is its integrated buffer, which takes on a memory function for excess butter containers. If the mixing ratio isn’t correct—for instance, if the upstream filling system screens out individual containers and consequently delivers an insufficient number of containers of a specific type to the packaging machine—the pick-and-place robot sets the excess containers in a buffer. At the same time, it gives a signal to the upstream filling machine so that it controls the filling to correct the production ratio. The robot then picks up the containers waiting in the buffer. In spite of production fluctuations, the right balance of salted and unsalted butter per case or tray will always be achieved.

Synchronization between machines and components is enabled by the open VMS control architecture. The two-, three-, and four-axis robots as well as the Schubert system all communicate in the same programming language, making them compatible with one another.

Depending on Meggle’s customer preferences, the mixing ratios of salted and unsalted butter containers vary. Currently, 75/25, 60/40, and 70/30 compositions are used. To deal with the mixer function, the case packer is equipped with Schubert’s patented counter-flow principle, whereby products run in the opposite direction through the machine from the packaging. Since there are always enough empty Transmoduls available to store products, no products fall from the end of the belt. At the same time, there is always enough product at the product infeed to complete the product groupings on the Transmoduls. Only completely filled Transmoduls therefore travel from the pre-grouping area to tray loading.

Meggle is very pleased with the result: “From the construction of the robots to simple format changing, from the buffer function all the way through to the open VMS control architecture, this machine is clearly superior to those offered by competitors,” says Holger Kühner, Technical Director at Meggle. “The machine has proven itself in our day-to-day production. In many respects, Schubert has even exceeded our expectations.” –Anne Marie Mohan

Watch a video of the system

The purchase significantly expands operational capacity and positions the company to meet the demands of its fast-growing customer and consumer base of Polk County, Fla. and surrounding areas.
Morgan Smith
Oct 26th, 2021

The key members of Stellar’s senior management team have been major contributors to the company’s success and will continue to drive its business forward in 2022 and beyond.
Morgan Smith
Oct 21st, 2021