On the edge of industrial IoT

With a series of moves including incorporation of Node-RED for IoT app development, application of MQTT for data collection and transfer, and embedded edge technology partnerships, Opto 22 is in a key position to support industry’s adoption of IoT. 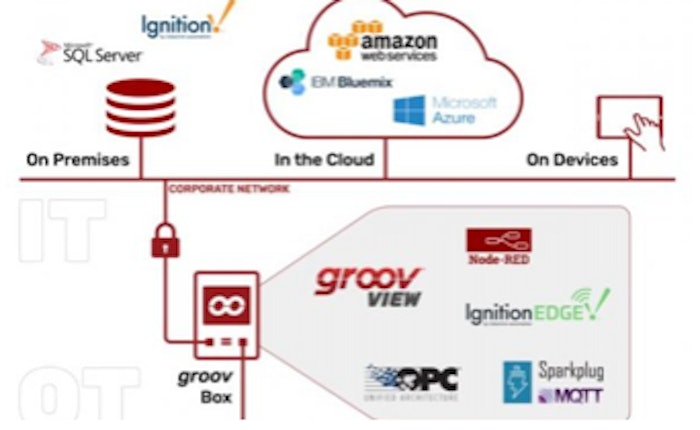 It’s history as a developer and supplier of industrial controls and I/O has placed Opto 22 at the center of numerous and varied industry applications over the years. In 2013, the launch of Opto 22’s groov box clearly positioned the company for developing industrial technology trends—such as mobile HMI and Industrial Internet of Things (IIoT) applications at the edge of the network.

Over the past few years, a “clear gravitation toward taking intelligence to the edge has developed,” said Benson Hougland, vice president at Opto 22. He pointed out that this is a trend not just for IT, but for OT (operations technology) too.

The move toward industrial edge computing “falls into what plant floor operators have been asking for,” Hougland said. “They don't want to have to send everything to the cloud or deal with IT just to collect and analyze data to improve operations. Edge computing is all about putting this capability into the hands of OT. It allows OT to participate in IIoT.”

Hougland explained that this is where tools like Opto 22’s groov come in. “It gives OT simpler capabilities to participate in IIoT without having to have a deep knowledge of IT networks and databases,” he said.

Opto 22 recently became involved with the EdgeX Foundry as one of the organization’s 50 founding members. The goal of EdgeX, a Linux Foundation open source project, is to build a common open framework for IoT edge computing—which dovetails with the goals of the Industrial Internet Consortium (IIC) and its IoT Solutions World Congress event, at which Opto 22 hosted its most recent exhibit.

The IIC, through its hundreds of supplier and end user members, is focused on creating a framework and architecture to help align technology suppliers’ development efforts and guide end users with a standardized process for IoT technology deployment. Similarly, the EdgeX Foundry is a community of technology companies coalescing around the idea of offering plug-and-play components—ranging from connected devices and applications to sensors and services—that can be combined to create secure, scalable IoT systems.

“EdgeX is helping to facilitate this move toward industrial edge computing,” Hougland said. “Their ideas around an open source framework for this are on point. That’s why we’re involved. Just as we were a founding member of OPC, we see EdgeX being in the right place at the right time too.”

Hougland clarified that he does not expect EdgeX to replace OPC, saying that it’s “another approach that helps overcome some limitations of OPC.”

Because the EdgeX platform is designed to run on edge computing devices such as programmable automation controllers (PACs) and mobile HMIs—two core areas of focus for Opto 22—it’s easy to understand Opto 22’s interest in being part of the organization. Another EdgeX Foundry founding member, Dell, has contributed its Project FUSE source code under Apache 2.0 to seed the EdgeX Foundry project.Opto 22’s support of EdgeX is currently being showcased through the use of Dell Edge gateways.

Given that industrial devices don't speak the language of IT computers, connecting these devices for IIoT applications requires an extra step. The partnership between Dell and Opto 22 is a good example of how this extra step can be facilitated through the use of Opto 22’s SNAP I/O, SNAP PACs and groov to convert industrial data for aggregation, analysis and transmission by the Dell Edge gateway.

The inherent disconnect between IT and OT technologies is why partnerships are important to the development of industrial edge platforms. “Ultimately, it’s all about that last inch of connectivity to the plant floor devices—whether that device is a PLC, sensor or gateway,” said Hougland. “From our partnerships with IBM Watson to Amazon Web Services to Dell, the common theme is they all need access to the plant floor data—which is where we come in. That’s why the current focus of EdgeX is all about the drivers needed to deliver OT data. Because EdgeX uses a RESTful interface for southbound communications (i.e., those headed toward automation/field level devices), that works perfectly with our PACs.”

Just ahead of the IoT Solutions World Congress, Opto 22 was part of another edge computing-related announcement at Inductive Automation’s Ignition Community Conference. This announcement spotlighted the upcoming availability of Ignition Edge Onboard on the groov box to give users a way to connect legacy devices that lack MQTT support to anMQTT message broker for IIoT applications.

Compact processing systems for baked snacks, sorters for nuts and dried fruits, and an innovative levitating material handling system are some of the highlights editors found at PACK EXPO Las Vegas and featured on this Take Five with ProFood World video.
Aaron Hand
Nov 5th, 2021

Spirits company Diageo reports on the state of its “Spirit of Progress 2030” sustainability program, and their global ventures to increase sustainable packaging for their brands.
Kim Overstreet
Nov 4th, 2021

The company has launched a new sustainability platform, which will include reforestation and carbon sequestration measures that will be aligned with its regenerative agriculture initiative.
Morgan Smith
Nov 4th, 2021

McCormick is one of only 44 companies worldwide to be awarded the inaugural 2021 seal that recognizes private sector companies for their sustainability efforts.
Morgan Smith
Nov 3rd, 2021

Snacking Soared in 2020: Growth to Continue at Slower Speed

Read about current snacking trends and market updates presented by SNAC International at PACK EXPO Las Vegas and in their State of the Industry report.
Kim Overstreet
Nov 2nd, 2021

Meal kit pioneer Gousto Recipe Box trialed a pea protein-based film that exhibits many of the barrier properties that plastic offers. But instead of having to be discarded, the edible film dissolves harmlessly in hot water as the meal is cooked.
Matt Reynolds
Nov 2nd, 2021

The company is paying $5.6 billion in cash for the remaining 85% of the line of sports performance and hydration beverages that’s on track for $1.4 billion in retail sales this year.
Morgan Smith
Nov 2nd, 2021

The company will take an end-to-end approach in its aim to reach its net zero emissions target by focusing efforts across key areas and delivering against its existing goals and targets.
Morgan Smith
Nov 1st, 2021