To maximize how much product could fit on a truck for shipment, Canadian tomato farm Cecelia Acres wanted to stack its pallets higher than its employees could comfortably handle. A Kawasaki CP180L robot integrated by Caxton Mark did that and more. 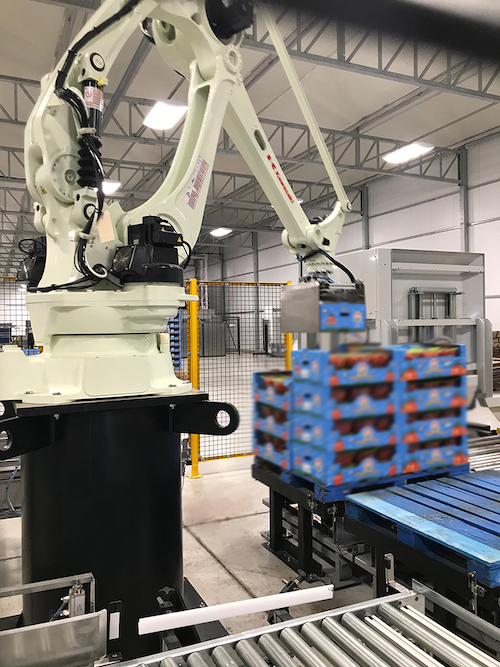 With new end-of-arm tooling designed by Caxton Mark, the Kawasaki palletizer is able to grab and stack boxes without crushing the fragile tomatoes inside.
Caxton Mark

Does anybody really like to start a math test with a story problem? I apologize, but here goes…

A large-scale farm packages its cocktail tomatoes in 2 lb top-seal bowls, 12 of which fit into what’s called a deep veg box. To achieve the greatest amount of volume on the truck that carries those tomatoes to a produce partner, the grower wants to stack the boxes 11 high on a skid, with 55 boxes on each skid. Each box measures 8.5 inches high, so one stack measures almost 8 ft tall, not counting the skid that it’s standing on. Just one man on a team of stackers is barely able to get the last 25 lb box to the top of each stack, holding the box at one corner so he can throw it up onto the last layer. Others have been known to use other pallets as steps to reach high enough.

Question: How long is this palletizing operation going to be sustainable?

This was essentially the math problem presented to Caxton Mark, a Canadian robotic integrator based in Leamington, Ontario. The integrator was helping Cecelia Acres, a Kingsville, Ontario-based tomato grower, deal with ever-increasing production goals along with high labor and shipping costs. In the end, automating palletizing operations with a Kawasaki CP180L robot increased throughput, eliminated ergonomic concerns for employees, and helped deal with the kinds of labor issues that manufacturers are seeing throughout their operations.

The robotic system also enabled Cecelia Acres to get the most out of its shipments to the distributor. “We designed the system for them to maximize the space in the trailers of the semis,” says Gino Fratarcangeli, director of operations for Caxton Mark. “So when they fill a truck, it’s as high as it can go without wasting space or wasting product.”

Certainly, the ability to consistently add that 11th box to the top of each stack without putting undue strain on one worker served to provide motivation for the change. But there’s more to it than that. “The robot doesn’t call in sick, the robot’s never late, and the robot does repetitive motion,” says Robert Chapman, director of automation for the Hazel Group, a group of three farms that includes Cecelia Acres along with Heritage Farms and Hazel Farms. “So I don’t have to worry about compensation, or he’s tired, or he’s slowing down, anything like that. It’s a steady pace and away we go.”

Far from concerned about robots eliminating jobs, the Hazel Group has difficulty finding reliable workers for the jobs it has, Chapman notes. “We’re bringing more offshore workers in because we know they’re going to be here for a term,” he says. “Whereas we can’t find locals—one day they’re here, next day they’re gone, we don’t know if they’re coming in. They want to go home, they just got here. Most of the time, it’s just we can’t find help.”

Taking over the palletizing job from the manual labor, Caxton Mark’s fully automated end-of-line system had a few challenges, including stacking the pallets 10-11 boxes high while staying balanced, maintaining production speed of 6 pallets/hr, and creating a custom end-of-arm tool (EOAT) that could handle the boxes without crushing the fragile produce.

At Cecelia Acres, once the boxes are stacked onto a pallet, the pallet needs to be able to stay upright as it moves 12 ft down a conveyor to the forklift. As boxes come down the line, the CP180L robot will pick them up and stack them onto one of two pallets, Fratarcangeli explains. “Once they’re full, it rolls back out and goes down the line, it pallet wraps, and then it waits at the end for a forklift driver to pick up and load it into the truck.”

To maintain balance, the boxes need to have as little space as possible between them. Caxton Mark needed to design an EOAT that could pick up one or two boxes at a time and stack them extremely close together while maintaining high product quality and throughput.

It took some trial and error to come up with the right EOAT. The first gripper Caxton Mark designed created too large of a gap between the boxes, resulting in pallets toppling on their way to the plastic wrapper. They also tried a gripper that squeezed each box from the ends, but the cardboard boxes were crushed under the pressure.

The final gripper being used opens on one side only, so it’s able to place the boxes while maintaining a 0.25 in. gap between the stacks, which keeps the boxes tightly packed and stable. It’s a very simplistic design but is also superior to anything Caxton Mark could buy from a third party, Fratarcangeli says. “It’s just enough pressure so it doesn’t crush the box, but it doesn’t let the box slip out either.”

The large work envelope and high speeds of the Kawasaki CP180L helped Caxton Mark fulfill the other requirements from Cecelia Acres. The robot meets the 6 pallet/hr goal at 80% robot speed. Automating this system also increased throughput because Cecelia Acres no longer had to take breaks into consideration. The CP180L robot is capable of 2,050 cycles per hour with a 180 kg payload. The CP180L also has a high vertical reach (2,200 mm), giving it the ability to meet Cecelia Acres’ demand for it to stack almost 8 ft high.

With some tweaks to the process and EOAT, they’ll be able to increase throughput even further. “We’re actually in the process now. We’ve redesigned another tool, and it’s almost out of the prototype stage. It’s on a robot here at the shop and it’s being tested,” Fratarcangeli says. “We’ll be able to pick up two of the very big boxes or four of the smaller cases now.”

The palletizer isn’t the first robot the Hazel Group has implemented in its operations and it won’t be the last. Robots had been implemented previously on case packing lines at two of the farms, Chapman notes, enabling the whole pack line to be run with five people; this contrasts with the 12-14 people needed for the other farm. He credits Hazel Group owner Chip Stockwell for getting the ball rolling on automation. “He came up with the idea to start looking into this stuff, and it’s paying off very well for him,” he says.

Though the Hazel Group has other plans in the works for additional robots, Chapman is hesitant to divulge too much about those projects in order to maintain a competitive edge. “We’re in design mode right now for the Heritage Farm, and if it works we’ll implement it at the Cecelia farm also,” he says. The grower is trying to be first in automating greenhouse packing, he adds. “We want to be No. 1 and that’s what we’re trying to strive for,” he says. “We’re trying to be one step ahead of the competition.”

And the one guy who laments not getting to throw those 25 lb boxes to the top of the stacks anymore? “He’s getting used to it. We got him a couple other jobs to compensate for what he was doing,” Chapman says. With such dedicated workers being few and far between, “we’ll find a job no matter what it is for him.”

The Power of Iconic Package Design

To keep up with skyrocketing demand for its collagen powders, Vital Proteins turned to Spee-Dee Packaging Machinery and its rotary filler. It boosted production from 20 to 100 plastic canisters a minute, also improving safety and ease of operation.
Aaron Hand
Jan 16th, 2020

Oatly Frozen Dessert is Plant-Based from Product through Packaging

Using oats rather than cow’s milk for its frozen dessert, Oatly also opts for a paperboard ice-cream pint container with a coating made from sugarcane rather than petroleum.
Anne Marie Mohan
Jan 15th, 2020

How to Identify Emerging Leaders

As the generational workforce shift looms with more than 2.7 million baby boomers preparing to retire, OEMs need to bridge the generational divide, retain tribal knowledge, and ensure a lasting legacy. Here’s how to do it.
Natalie Craig
Dec 12th, 2019

Products on the list include those in the food and beverage, personal care, OTC, and petcare categories and reflect consumer trends such as good-for-you ingredients, convenience, and a move away from traditional beverage products, among others.
Anne Marie Mohan
Jan 13th, 2020

Learn what Vision 2025 participants at PACK EXPO Las Vegas had to say about improving asset reliability in their organizations, and where they are on the road to continuous improvement.
Kim Overstreet
Jan 10th, 2020

What’s for Dinner? With AI App, Now You Can Just Ask Your Fridge.

AI-powered image recognition is used to understand what’s inside the fridge, and then make recommendations based on your preferences and what you have in the ice box.
Joyce Fassl
Jan 8th, 2020

Also has entered into an agreement with a third-party logistics partner as it expands manufacturing and logistics network
Morgan Smith
Jan 8th, 2020

Who's who of packaging and processing align to pick top honor.
Sean Riley
Jan 8th, 2020

Supply chain and logistics professionals will be focusing on labor issues and new technology in 2020, particularly those that improve safety and efficiency.
Kim Overstreet
Jan 7th, 2020