Dairy producers come in many sizes, but tighter enterprise integration to plant assets is one way to optimize the “milk standardization” process. 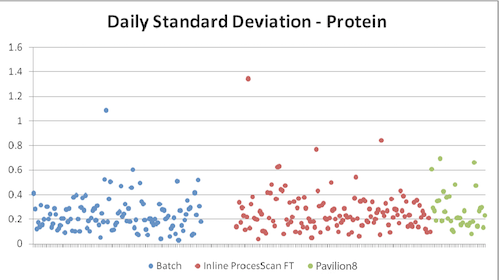 Fonterra Dairy’s Dennington facility moved from a batch to a predictive control approach and reduced protein giveaway by 49%.

Sizable CapEx plant spending on equipment and advanced automation in the dairy industry is well underway. Industry leaders like Chobani have caught the attention of consumers, and the dairy industry itself has been in the spotlight due to its aggressive monitoring and optimization effort across the enterprises (see related story on Chobani reveals its secret for better production data visibility).

Furious innovation — and investment — is producing dividends as plants target different processes within dairy processing facilities. Dairy producers are currently identifying better efficiencies for the "standardization process" of fats, proteins, solids non-fat and total solids. Milk standardization takes those components, such as fat, that have previously been separated from a product, and then are added back into that product in precise or standardized quantities.

Plant strategies for better milk standardization efficiencies can include newer inline equipment connected to the entire process, such as the separator, valves and other equipment. Moving to an inline approach allows producers to shift away from inflexible, batch standardizing that necessitates long buffer times with fat or protein yield  (meaning the entire product batch needs to discharge from the pasteurized tank).

Commissioning of inline, dairy standardization equipment also avoids disruption to a plant production schedule. “We had about three days to install a new standardized system that would replace three, obsolete pieces of equipment,” says Josette Bogerman, regional project manager at Arla Foods in the United Kingdom.

For Arla Foods’ Palmers Green dairy application, Tetra Pak supplied the new standardization equipment, allowing the food producer to run its milk fat setpoint at 3.0% and have it come in at +/- 0.015% of the setpoint.

Before the addition of this new equipment, operators took samples and then adjusted the fat content accordingly. “Now we always know what’s in the tank and operators trust what they read on the screen is in the tank,” says Bogerman. Our plant operators also favor the new equipment when it comes to short, product runs, since they are difficult to standardize.”

This dairy producer processes about 1.2 million liters daily and has a large number of clients. “Different customers demand that their milk is processed separately,” says Bogerman. We deal with enormous amounts of product changeovers and segregation, and this gives us less time for standardization in the tanks.”

Other approaches for dairy standardization in the industry include tighter integration into a plant’s main control system — via industrial networks — to provide better alarm information to operators.  “Operators can now anticipate process disturbances and can actually 'freeze' control valves around the standardization process,” says Scott Young, dairy consultant for system integrator Maverick Technologies in recent webinar. “Otherwise, the recovery time for producing product within specifications after a process disturbance, like a separate or desludge, will take longer.”

The Dennington facility moved from a batch to a predictive control approach, and the plant reduced protein giveaway by 49%. Other bottom-line results included a 38% reduction for fat annually while saving close to $685,300 in the first year of operation with this new automation approach.

“Most of the time the customer will use their current control system with the instrumentation in place, as well. If not, we'll make some recommendations to include that in ROI calculations," says Lance Rodenfels, dairy solutions expert at Rockwell Automation in the  webinar. We usually target one year to year and a half return with the MPC optimization platform.”

The shared, immutable ledger database is in the spotlight as a potential tool to improve transparency and better facilitate recalls.
Jeffrey Barach, PH.D.
Apr 5th, 2019

Polytron used its platform at ProFood Tech to demonstrate a case in which OEE metrics were improved in a real-word bottling application.
Matt Reynolds
Mar 27th, 2019

Neither Ethernet nor fieldbus have all the answers for industrial applications. Suppliers and industry groups are working on ways forward that take into consideration the needs—and limitations—of the present.
Jeanne Schweder
Mar 8th, 2019

The release of iFix 6.0 shows GE Digital’s continued support for and development of its existing technologies as the company reorganizes around new technology groupings designed for cross-industry use.
David Greenfield
Mar 1st, 2019

An automated approach to emerging markets

In a move aimed at modernizing its operations, the Chinese dairy producer will implement the Siemens digital platform to achieve operational efficiency.
Stephanie Neil
Jan 16th, 2019
More in Software

Can lessons from pharma track & trace be applied to the food supply chain?

Members of the pharma supply chain and solution vendors have learned a lot about what it will take to meet the DSCSA track and trace requirements. Can those lessons be applied to tracking and tracing in the supply chains of other products, such as food?
Dirk Rodgers
Jan 9th, 2019

Exclusive: Experts weigh in on the impact of data

In an exclusive roundtable discussion with Automation World, Georgia Tech engineering, science and research experts shared their insights on the trajectories and effects of artificial intelligence and machine learning, and how the intersection of data and technology is changing the industry.
David Greenfield
Jan 8th, 2019

Easy, adaptable ERP is a reality

Four years ago, QAD embarked on a bold multi-year mission to change the rules—and the reputation—of ERP. Now, the company says, that platform is ready and awaiting what the future holds.
Stephanie Neil
Nov 30th, 2018

A large sauces and dips maker embarks on a pilot project at a 10-year-old plant to connect multiple business units and begin a journey to optimize supply chain, processing and packaging costs.
Grant Gerke
Oct 22nd, 2018

Can your current package navigate the e-commerce supply chain?

Unlike being shipped to a distribution center as part of a tightly wrapped full pallet, your e-commerce package can sustain up to 30 touches along the way and end up bouncing around in the back of a truck.
Jim Chrzan
Jun 6th, 2018

The largest provider of canned beans turns to an operations management software platform to gain real-time visibility across its manufacturing processes.
Apr 16th, 2018

Engineers work closely with the brewery team to develop an understanding of its brewing and CIP processes, capturing each brewing vessel’s process in detail.
Apr 6th, 2018