Polytron used its platform at ProFood Tech to demonstrate a case in which OEE metrics were improved in a real-word bottling application.

A well-known global consumer goods manufacturer had several bottling lines that were underperforming. There was pressure to make upgrades and improvements in order to meet KPIs; mitigate investment risk; and meet growing market demand. Lines needed to operate more efficiently and profitably. The company's goal was always clear: Increase production by 50 percent. They decided to pilot some changes on one line before universally reconfiguring the others.

Fixated on the wrong issue

Prior to Polytron’s engagement with this company—and fixated on line speed and throughput—the client determined that one of the machines on the line needed to be replaced as the culprit of poor performance and limited capacity.

The new machine had the capacity to run at 300 bpm when coupled with improved bottle handling, but would that be enough to get them to the output goal? Without clarity, problem-solving turned myopic as they zeroed in on line speed, when in fact, helping them clearly see the breadth of the issue across the entire line was the true need.

Polytron was hired as the recognized industry expert who not only knew the industry and business, they also understood the bottling line operation and could demonstrate with strategic certainty how the desired business outcomes could be achieved.

Starting with a comprehensive line audit, Polytron’s engineers were able to observe and assess the line and collect baseline performance data. Then, an exact 3D simulation model of the production line reflecting the existing conditions and inefficiencies was created. This digital twin mirroring the one on the plant floor allowed the testing of nearly any imaginable scenario. It was a pre-visualization of how well the line could run when optimized.

Not only was it clear what had to be done but the simulation also suggested some surprising and even counter-intuitive insights prompting a road map of next steps. The model created confidence to make the right decision for the business.

Polytron’s PolySimSM is a three-dimensional animated simulation of a line. This visualization predicted that, after replacing the culprit machine with one which had a higher throughput, problems would arise elsewhere on the line.
• Any time one machine in the line faulted, it almost immediately stopped all upstream machines, creating “micro stops” and significant performance losses.
• Each machine on the line was operating as an “island of automation,” being stopped and started arbitrarily based on line faults and back up conditions governed more by the instincts of the operators and less by good information.
• The breadth of the compounding issues was becoming clear.
The new machine could run at 300 bpm and was enlisted to increase the overall pace of the line. Along with the blow molder, it was capable of over-supplying the filler when set at 250 bpm.

Then, attention turned to the machines downstream of the filler. They needed to be set at progressively increasing bottling rates, with the capability to modulate speeds based upon bottle population.

Finally, Polytron engineers suggested adding two minutes of bottle accumulation post-filler. This would buffer downstream hiccups and keep the filler, the line constraint, running optimally. Without the modeling, it would have seemed ridiculous to slow the line down to increase throughput.

By adding two minutes of buffer to the line, integrating machine, conveyor controls, and modulating machine speeds around a target filler speed of 250 bpm, the client could achieve twice the Overall Equipment Effectiveness (OEE) and a much higher output of the line – more than two times what they were achieving.

To everyone’s surprise, the changes made to this one line would be so effective that one or two of the other lines previously needed to meet market demands could actually be moth-balled temporarily. Shutting down these lines would reduce operational costs and eliminate, or at least postpone the need for a multi-million dollar capital expansion. 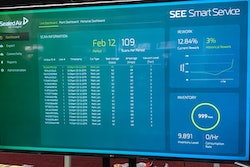 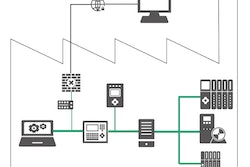 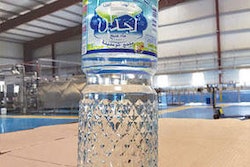