This California maker of premium sausages was relying on a mix of ink jet printing and thermal-transfer printing on both film and paperboard. New CIJ printers have changed everything. 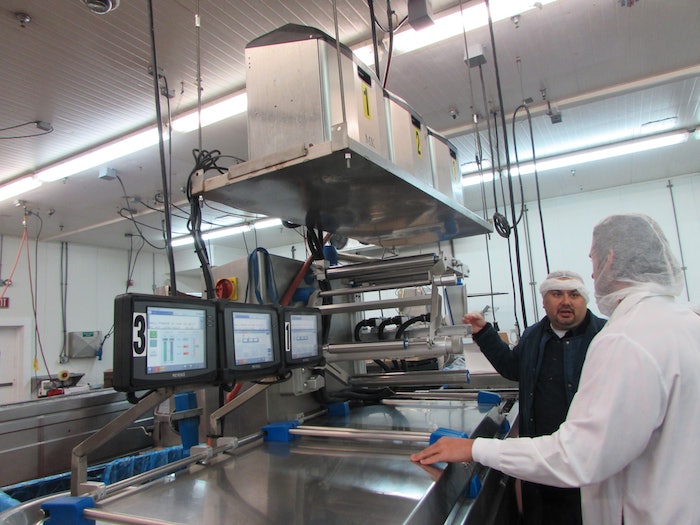 Papa Cantella’s is a family owned and operated company based in Vernon, CA, that specializes in premium sausages. Many of its products are vacuum packaged in flexible film and then frozen. Later, the frozen packages have a paperboard sleeve or carton applied.

In 2015, after experiencing some difficulties with lot and date coding on folding cartons, the firm decided to replace an existing ink-jet coding machine with an MK-U6000 Series Continuous Ink Jet printer from Keyence. Management was so pleased with its performance that the firm now has 11 of them in operation, seven printing black ink and four yellow. Five of the printers are in the production area where primary packaging is done, so the substrate they print on is flexible film. In one application, three of the printers are mounted over a horizontal form/fill/seal system. They are a replacement for a thermal-transfer printer that traversed across the three-up configuration of primary packages being produced. Because it’s no longer necessary to allow time for the traversing to take place, the packages are now produced at a rate of about eight/min rather than being limited to 5 or 6.

Four of the Keyence printers are in the packaging area, so typically they are printing on paperboard. Finally, two of the ink jet printers are mobile units mounted on wheels so they can be positioned where they’re needed.

According to Keyence, stable operation was the main focus during development of the MK-U6000. That’s why the printer has what Keyence calls a world’s first: an auto-shower function that cleans the ink path, nozzle, electrode plates, and gutter all at once. Manual cleaning to wash off the ink that adhered inside the head is a thing of the past, and operators appreciate being exposed to less cleaning solvent. To see the auto-shower function in action, go here: https://www.youtube.com/watch?v=slspLej2zuc&feature=youtu.be

Also notable is a specialized conditioning tank system and a viscosity sensor for use in collecting the solvent after cleaning. This prevents ink dilution, thus stabilizing viscosity and maintaining print quality.

Another design imperative in the development of the MK-U Series was to make maintenance easy to understand and perform. Simple on-screen instructions can be viewed on the touch screen if an error occurs. Since the recommended operational procedure is displayed right on the screen, incorrect troubleshooting is impossible, says Keyence. Also, in the event that the highly precise ceramic nozzle needs to be replaced, it can be done without using any tools, so downtime is kept to a minimum.

A touch panel that brings ease of operation was another priority in the design of these printers. So the touch panel readily attaches to and detaches from the controller, making it easy to perform operations while checking the product. Also, passwords can be used to lock the functions that are not used on a daily basis. This prevents incorrect operations and contributes to reductions in time spent managing the device. In other words, it minimizes opportunities for human error.

The 11 printers have been phased in relatively quickly since the first one arrived, with the two most recent installations taking place in July of 2016. The benefits have been impressive in terms of print clarity, faster speed, cost savings, reduced time spent on maintenance, reduced downtime, and ease of operation. As Papa Cantella’s Jesse Zepeda succinctly puts it, “Keyence has a great solution at an affordable price.”

The purchase significantly expands operational capacity and positions the company to meet the demands of its fast-growing customer and consumer base of Polk County, Fla. and surrounding areas.
Morgan Smith
Oct 26th, 2021

The key members of Stellar’s senior management team have been major contributors to the company’s success and will continue to drive its business forward in 2022 and beyond.
Morgan Smith
Oct 21st, 2021