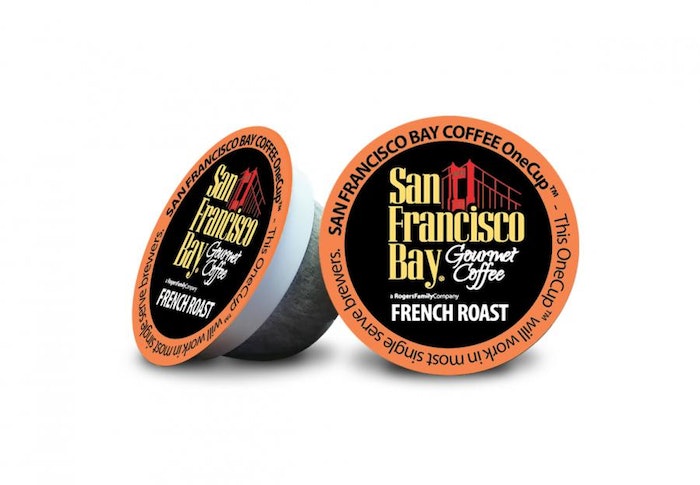 The No Waste OneCup coffee capsule is constructed of a ring and mesh made from PLA, and a wood pulp-based lid.

Since introducing its single-serve coffee pod products seven years ago, family-owned San Francisco Bay Coffee Co. has been working on capsule technology to reduce packaging waste to landfill — a project that came to fruition October 2017, with the launch of its No Waste OneCup packaging. The company bills its new pod packaging, currently being used for 100-count cartons of French Roast blend for Costco, as the first no-waste solution, with a compostable pod, a compostable mother bag, and a recyclable carton.

Since San Francisco Bay Coffee was born 40 years ago, its emphasis has been on making the best pot of coffee possible, while giving back to communities locally and those where its beans are sourced, and on being environmentally responsible.

Therefore, the packaging waste resulting from coffee capsules rankled its sustainability sensibilities, even as it participated in the market. “We decided we wanted to get into the single-serve market when we were seeing the explosive growth,” says Jim Rogers, one of four Rogers siblings running the company. “But at the same time, we were really alarmed at how much plastic was being thrown into landfills.

“The first thing we did was talk to a number of suppliers and customers to gauge their interest in more environmentally friendly packaging and to ask, ‘What can we do right off the bat?’”

The first change the company made to the traditional pod was to eliminate the thermoformed plastic cup used to hold the coffee, replacing it with a mesh material attached to a plastic ring. That alone reduced the plastic content of the pod by 25 percent to 30 percent, recalls Rogers.

Over the next six years, San Francisco Bay Coffee challenged a number of suppliers and converters and invested “a couple million dollars” to find a less wasteful package. In looking at the options, the company opted for compostability over recyclability. “The whole coffee capsule market is based on convenience. No one is going to take a traditional coffee pod and spend 10 minutes separating all the components so they can recycle it. I just don’t see that happening,” says Rogers. “We went down the road of compostability for two reasons: number one, using materials made from renewable materials is far superior to using petrochemicals, and number two, composting has made a lot of strides in the last five years, and we hope that continues.”

The new pod uses corn-based polylactic acid for the ring and mesh, and a wood pulp-based lid, both from proprietary suppliers. Among the challenges of developing this construction was that in early iterations, the ring would warp during transit and not work in the coffee machine, and sometimes the mesh holding the coffee would burst.

San Francisco Bay Coffee is using existing equipment to fill the capsules, but with extensive modifications. “We had to modify how the mesh was formed, and part of the challenge was finding a lid that would stick on a corn-based ring. You don’t want the lid separating during the brewing process,” says Rogers. “The project involved all kinds of things you wouldn’t even think of.”

Rogers admits the one weakness in the pod design is the fact that it’s not a sealed unit, resulting in the need for a mother bag, which holds 10 to 12 pods to keep the coffee fresh until use. With the new design, San Francisco Bay Coffee introduced a PLA bag that is also compostable.

When citing compostability, Rogers emphasizes the packaging is certified by the Biodegradable Products Institute for industrial composting only. While composting isn’t available curbside for consumers, San Francisco Bay Coffee has added to the carton the website information for findacomposter.com, so consumers can learn if there is a composting facility in their area.

In the meantime, Rogers says the company is continuing to work toward a pod that is also home-compostable. “Our goal has always been not to be where we are right now, but to be completely and fully compostable,” he says. “We want to see dirt in 90 days.”

San Francisco Bay Coffee produces a number of private-label brands as well as its own brand products, sold in national grocery stores, mom-and-pop gift shops, and online. The No Waste OneCup packaging has so far launched only in Costco, but eventually will be used for all the coffee company’s single-serve products.

“The No Waste OneCup is a huge step toward potentially reducing the environmental footprint associated with single-serve coffee,” says Rogers. “Now that San Francisco Bay Coffee has shown we can produce pods made from 100-percent compostable materials that come in recyclable packaging, we’re hoping the industry follows suit so we can really move the needle on coffee-related waste.”