Pennington Distilling Co. redesigns the bottle for its Pickers Vodka to grab attention on shelf while communicating its connection to Nashville and its musicians. 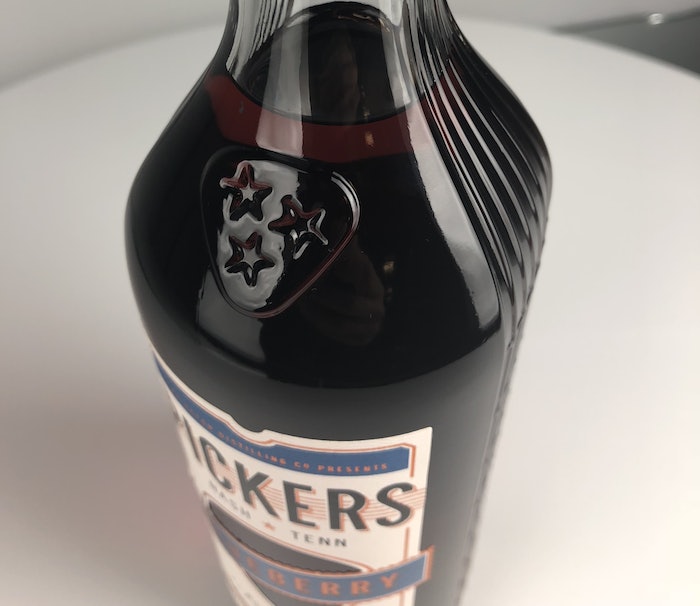 The two sides of the bottle are embossed with the neck of a guitar, giving Pickers a matchless look from every angle.

Established in 2011, Pennington Distilling Co. is an artisan distillery nestled in the historic Nations neighborhood of Nashville, TN.Pennington’s Pickers Vodka, the company relays, “is an excellent, handcrafted vodka that reflects Nashville’s distinctiveness.” Distilled 11 times through Pennington’s state-of-the-art column still, filtered four times, and blended with premium Tennessee limestone water, the vodka is distinctive indeed. However, the packaging in which the spirit launched in April 2015—a stock bottle with a plastic closure—was not.

In 2018, Pennington looked to Berlin Packaging and its Studio One Eleven design team to redesign the bottle to reflect the vodka’s uniqueness. The caveat was that the new structure had to be able to run on the distiller’s existing filling line with minimal disruption.

According to Scott Jost, Berlin Packaging Vice President of Innovation & Design, as with all new structural packaging design projects, Berlin began by auditing Pennington’s filling, capping, and labeling capabilities to understand the interplay between the processing equipment and the soon-to-be-outgoing packaging. “Concepts that require no line modifications or adjustments are considered ‘operationally invisible’ solutions,” he explains. “For the Pickers project, we targeted minimal operational impact by maintaining filling-head height and bore, overall diameter, label area, and the closure within the range of existing equipment adjustability.”

Other than height, diameter, and label area though, the new bottle strikes an entirely different chord, embossed with details that clearly connect the brand with its music city roots. The clear glass bottle, designed by Studio One Eleven and supplied by Berlin’s Bruni Glass division, prominently features an embossed guitar pick bearing the iconic three stars of Tennessee’s state flag near the its neck. To reinforce musical connections and influence, the two sides of the bottle are embossed with the neck of a guitar, giving Pickers a matchless look from every angle.

According to Jost, 3D data sets were invaluable during all phases of the project. “From early visualizations showing how light would refract within the visually complicated ‘fretboard’ detailing to communicating seamlessly with toolmakers and line operators, 3D files and the prototypes we produced from those files allowed stakeholders to explicitly understand the design concept’s implications across the entire supply chain,” he explains. “The result was greater confidence, faster approvals, and improved speed-to-market for Pennington’s new packaging.”

Pennington launched the new bottle in August 2018 in a 750-mL and a 1-L size. Raving about the bottle’s ease of handling are consumers—and bartenders especially—who attribute the bottle’s better grip to its slender width and guitar-fret embossing. Retailers have responded enthusiastically as well, as the clean design and ROPP finish have resulted in an improved shelf presence for Pickers. Since the new bottle was introduced, the Pickers Vodka brand has expanded to 17 states nationwide.

“As Pennington Distilling Co. has grown, the need to work with a vendor such as Berlin Packaging that can source and manage all of the components of our brand’s packaging has been invaluable,” says Jeff Pennington, company Founder and President. “By streamlining this process, we are now able to focus our attention on what we love to do, which is make a great product.”