The U.S. supply chain is hanging in there now thanks to inventory and slack in the system, but current production gaps overseas, and worker absenteeism closer to home, warn of eventual supply chain disruption. 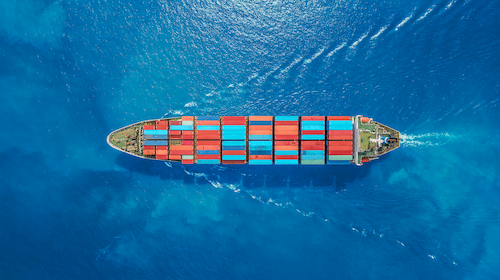 In PMMI’s second Virtual Town Hall, held April 2, a panel of consumer packaged goods (CPG) professionals from the OpX Leadership Network Executive Council convened with PMMI members to discuss a host of ways they can work better together. They covered a range of topics, the full complement available on this page. But one topic in particular was how to navigate sourcing in an era of potential supply chain disruption. After all, the two sit next to one another on the chain.

Supply chains hanging on, but careful planning is required
According to CPG panelists on the call, the current supply chain environment is mixed, but so far is generally holding up. A Packaging World survey reveals the biggest questions to come may lie in the ongoing shift from foodservice to retail production, but people are still eating--that won't change.

Still, lags in production that are happening now may take some time to make their way downstream to manufacturers, requiring advanced supply chain planning.

“We feel the real impacts may be further out,” says Flickinger. “We’ve tried to set ourselves up so we have two to three months of materials—packaging and raw materials—in-house and on-shore. We’re working on a four to five-month time horizon to project and figure out how we’re going to manage our way through.” 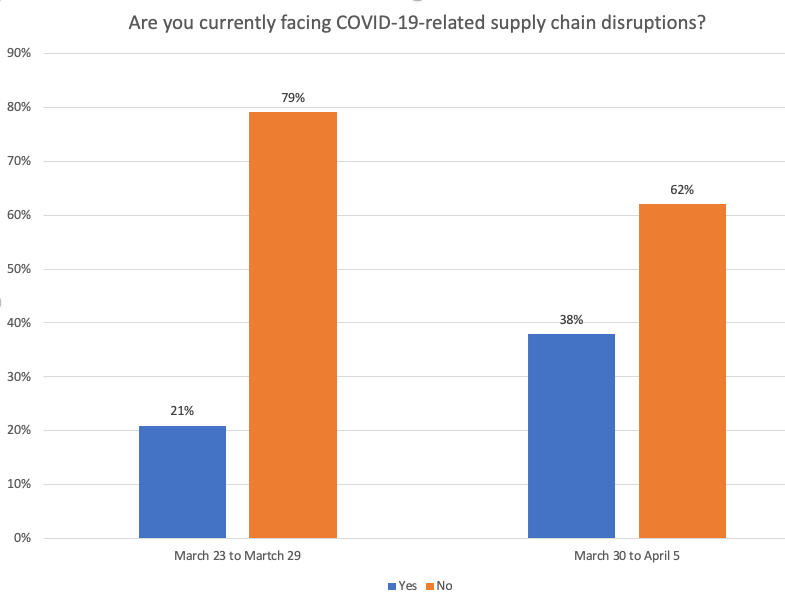 That’s because ingredient and raw material production in locked down countries—India and China especially—has in cases been completely shut off. While inventories here in the states are holding out, that stretch of zero production will eventually catch up to American manufacturers, after some lag. Even as places like China appear to ramp back up, and hopefully India will before long, a lot of thirsty manufacturers will be waiting when those faucets are turned back on. COVID-19 response teams at CPGs are thus planning for that eventuality, and communication among teams seems to be the primary method of problem-solving.

“We have weekly calls with all of our site operations general managers and other stake holders,” Flickinger says. “We're constantly looking at the current inventory position of materials, how much is available within a day or on-shore, and then looking at the projection going forward. We're now working and projecting out into the four-month-plus segments.”

Pawlick at Wells Enterprises relies on close and frequent communication as well, with daily pandemic response team calls across roughly 26 critical areas. Supply chain stabilization is one of those 26.

Absenteeism's role in supply disruption
It’s interesting that Pawlick listed “people showing up” in a supply chain discussion. The panel revealed that workforce attendance/absenteeism and supply chain interruption are closely linked, and this is particularly visible just upstream of manufactures at the machine builder or OEM level.

According to both Ivy and Edington, both coming from an OEM perspective, worker absenteeism is a danger for future supply chains. Ivy, for one, believes that there was enough in the distribution pipeline to cover his supply needs for at least a month. Companies had enough inventory in warehouses that up to now, they could ship, and to a certain extent, maintain regular production.

“But I think you're going to see, and what we're starting to see now, is interruptions to the supply chain and overall supply do worker absenteeism is going up at the [parts] factories. As this goes on longer, and workers get more worried, you get more absenteeism,” he says. “That will definitely affect OEMs. I think you're going to see a drastic change in the next three weeks, as to disruptions in supply chain. That’s because now the warehouses are depleted, all inventory stock is gone, and everything we had in our plant is depleted.”

Ivy is taking a similar tact to his CPG and food manufacturer panelist counterparts in doing a daily supply chain health check call with his team but goes a step further in including their own upstream suppliers, particular mission critical suppliers.

That’s because many of Ivy’s suppliers also work on other essential or critical businesses, healthcare for instance. Some prioritization is given to medical facilities in need of personal protection equipment (PPE), “over supermarkets wanting ham steaks,” he says.

“We're doing calls with our own suppliers daily, and we're finding it changes daily,” Ivy adds. “It's getting pretty dynamic out there.”

While simply avoiding COVID-19 is causing the absenteeism that stands to disrupt supply chains, Greg Flickinger says not to forget the disruptive capability of COVID-19 positive cases, either in your own facility or in that of a direct, primary supplier.

He gave an example of a supplier, one with a single point of distribution in the U.S., that had two people test positive for COVID-19. Being a distribution location, it was warehouse. GTI had an essential, time-sensitive construction shipments that needed to come out of that warehouse. But the warehouse had to shut down, quarantine, and clean. It was down for three or four days.

That forced Flickinger to reposition materials from another state into that project until the affected supplier could get the warehouse back up and running.

This case study brings several supply chain considerations. Are you coming from a single point of reference? Is there a sub-supplier that is the only source of what your direct supplier needs? If a sub-supplier is coming from a single sourcing point, that becomes another danger area; another critical potential choking between a CPG and the equipment and materials it needs.

“The fact is we’re also going to see internal disruptions that could be a couple of days here and there, or they could be very impactful in the supply chain when all of our local inventories are depleted,” Flickinger says. “It's not a question of if COVID-19 infections are going to affect us. We have to think that all of our suppliers, even us, we're going to get hit with a positive. The question is, are we prepared, and how do we react to keep the rest of our people safe from risk? Secondly, how do we try to keep our operations flowing under those circumstances?”

See PMMI's COVID-19 Resource Page and register for future Town Hall Series. The Town Hall Podcast from March 26  can be listened to as well.

There are controllable factors that can have a profound effect on a successful CPG/co-manufacturing relationship, including safety, trust, honesty, negotiation, brand protection, confidentiality, and skin in the game.
Robbie Martin
May 29th, 2020

As more manufacturers are allowed to resume production amid the COVID-19 pandemic, keeping their workers distanced will be key to keeping them healthy. Here are some innovations to help achieve that.
Aaron Hand
May 28th, 2020

New Guidance on Voluntary Reporting of Temporary Closures During Pandemic

In many cases, FDA may not be aware that firms are temporarily closed or need to close as a result of the pandemic.
Joyce Fassl
May 28th, 2020

Top quality natural mineral water and an exclusive bottle design are the trademarks of the Badoit brand, and now their multipacks are also consistently first class.
Pat Reynolds
May 28th, 2020

In addition to implementing extensive sanitation measures and temperature screenings at its locations to prevent the spread of COVID-19 and keep employees safe, the company has introduced hardship pay and other benefits.
Joyce Fassl
May 28th, 2020

Project is part of company’s $100 million-plus investment plan to increase Nestlé’s presence in the area.
Morgan Smith
May 27th, 2020

Pyraser Landbrauerei, founded in 1868 in the Franconia region of Germany, recently invested in a KHS Innofill Glass DRS filler.
Pat Reynolds
May 26th, 2020

Technology Built for the Open Road Hits the Plant Floor

Chad Buechel tapped to lead KanPak U.S., will be responsible for all aspects of the business
Morgan Smith
May 20th, 2020

A brand refresh for Sun-Maid’s raisin and other whole-fruit products includes changes that aim to appeal to millennial shoppers looking for healthy snacks for their families.
Anne Marie Mohan
May 19th, 2020

With varied SKUs for CM/CP business, plus a quickly growing in-house brand of its own, this cannabis-infused beverage producer found that shrink sleeve labeling is the right solution for just about any and all form factors, whether glass, PET, or cans.
Matt Reynolds
May 19th, 2020

Economic Outlook: 2020 and Beyond

By printing a QR code on the side of aluminum beverage cans, this Canadian firm and three partnering beverage producers are lifting spirits in this time of pandemic.
Pat Reynolds
May 18th, 2020

It’s All About the Cost, Not the Price

Just like all change management, total cost of ownership is a journey that has transformational results when successfully implemented.
Stephen Schlegel
Bruce Larson
James Couch
May 14th, 2020

With the COVID-19 lockdown, U.K. craft soda company Dalston’s unveils new shippers for its growing online sales that pay homage to its music roots, while introducing new consumers to the brands’ values and personality.
Anne Marie Mohan
May 13th, 2020

Machine Efficiency and the Impacts of Sustainable Packaging

Abe Eshkenazi, CEO of the Association for Supply Chain Management, discusses what retailers can expect in terms of changing consumer behavior—namely a shift away from commercial/foodservice, and toward e-commerce and retail.
Matt Reynolds
May 12th, 2020

Behind the Shield: InvisiShield Defends Fresh-Cut Produce from Harmful Pathogens

The anti-microbial packaging acts as a final kill step in the supply chain.
Maya Norris
May 11th, 2020