Big Packaging Line in a Small Footprint? No Problem if it Handles a Dozen Formats

With the large but flexible Innopack TLM packaging system, a KHS and Schubert collaboration, this many-SKU winery used just one machine to pack a dozen formats and varieties.

With 180 years of history behind it, German wine maker Rotkäppchen-Mumm Sektkellereien, has in modern times grown into a world-leading manufacturer of wine and spirits. Since 1984, the brand with the eponymous red cap (in German, Rotkäppchen refers to the "Little Red Riding Hood" nursery rhyme) has been the leader for sparkling wine in the local Saale-Unstrut wine-growing region. More recently, it has been acquiring complementary wine brands and vineyards on its journey to offer a comprehensive selection of wines of all varieties. The range of different packaging styles required is thus also sizeable, proving something of a challenge for production. 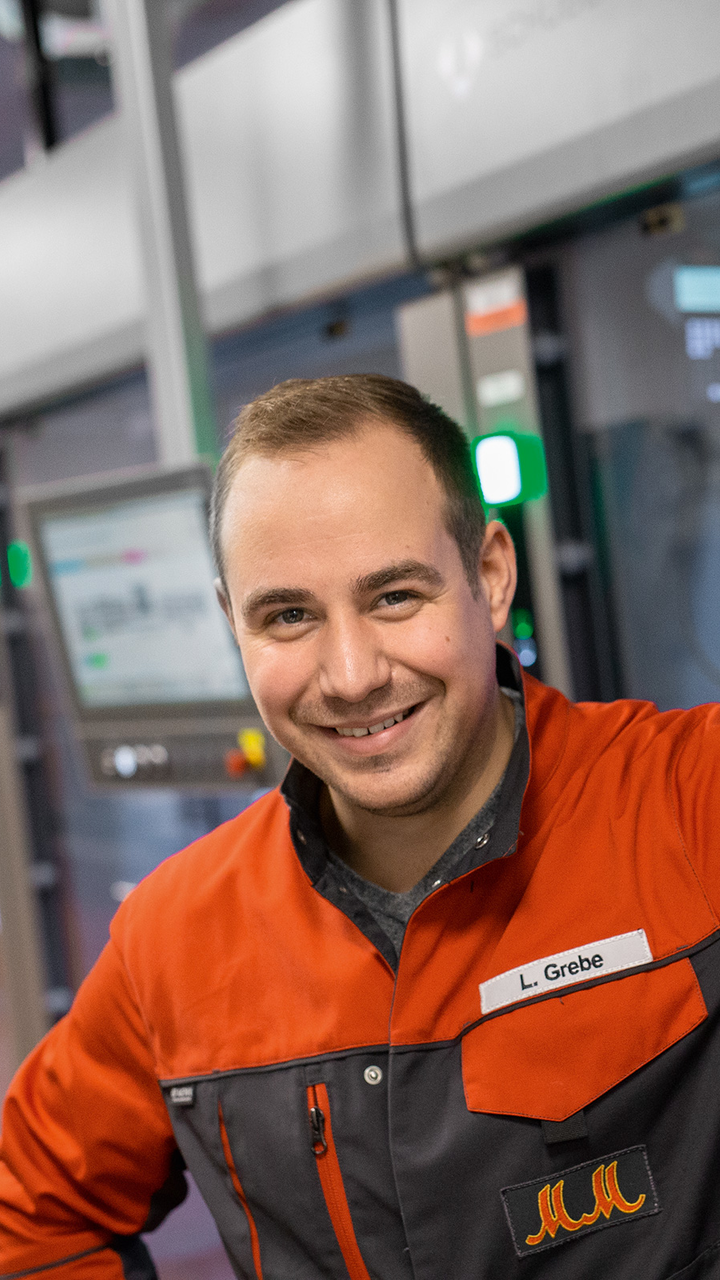 “Compared to our previous standard we’ve doubled the line capacity for our gift packs of one and two bottles,” reports Lars Grebe, head of Sparkling Wine at the Rotkäppchen-Mumm Enology Competence Center in Eltville, Germany.

“Up until now we needed a separate secondary packaging machine for each format,” says Lars Grebe, head of Sparkling Wine at the Rotkäppchen-Mumm Enology Competence Center in Eltville, Germany. The Center is where the winery’s all-star sparkling wine brands—Mumm, MM Extra, and Rotkäppchen fruit secco—are filled into 0.75-liter bottles and piccolo containers holding 200 mL. “Our production site is in the middle of a residential area bordered on one side by the River Rhine. There’s therefore no room to expand. As we only have a very limited space at our disposal, it’s imperative that we make efficient use of it.”

Grebe and his team began looking for a specialist who could make its secondary packaging area more powerful and flexible in order to satisfy growing market and marketing requirements. The company arrived at a collaboration between two local German companies with global scope—KHS packaging and filling machinery and Gerhard Schubert GmbH secondary packaging and robotics machinery . Working together on the Innopack TLM packaging system, these two suppliers were able to master this mammoth task using just one machine to cover an immense variety of wines and formats.

The packaging variants range from batches to individual bottles in a gift pack, which are bundled in wrap-around cartons of 24 for ease of transport, to clusters of four bottles. When the packaging system was first ordered, the list already included nine formats, and further formats were added during the machine’s commissioning. The need for more varieties is in part due to the fact that market requirements in Germany and Europe are changing ever faster, and the shelf space provided by retailers is not always increasing despite the growing variety of products. This is why, for example, in the future 12-pack cartons might have to be filled with two 6-packs instead of the previous 3 x 4 bottle-format. The KHS and Schubert mono-block solution implements all desired formats in a single machine at up to 600 products/min. 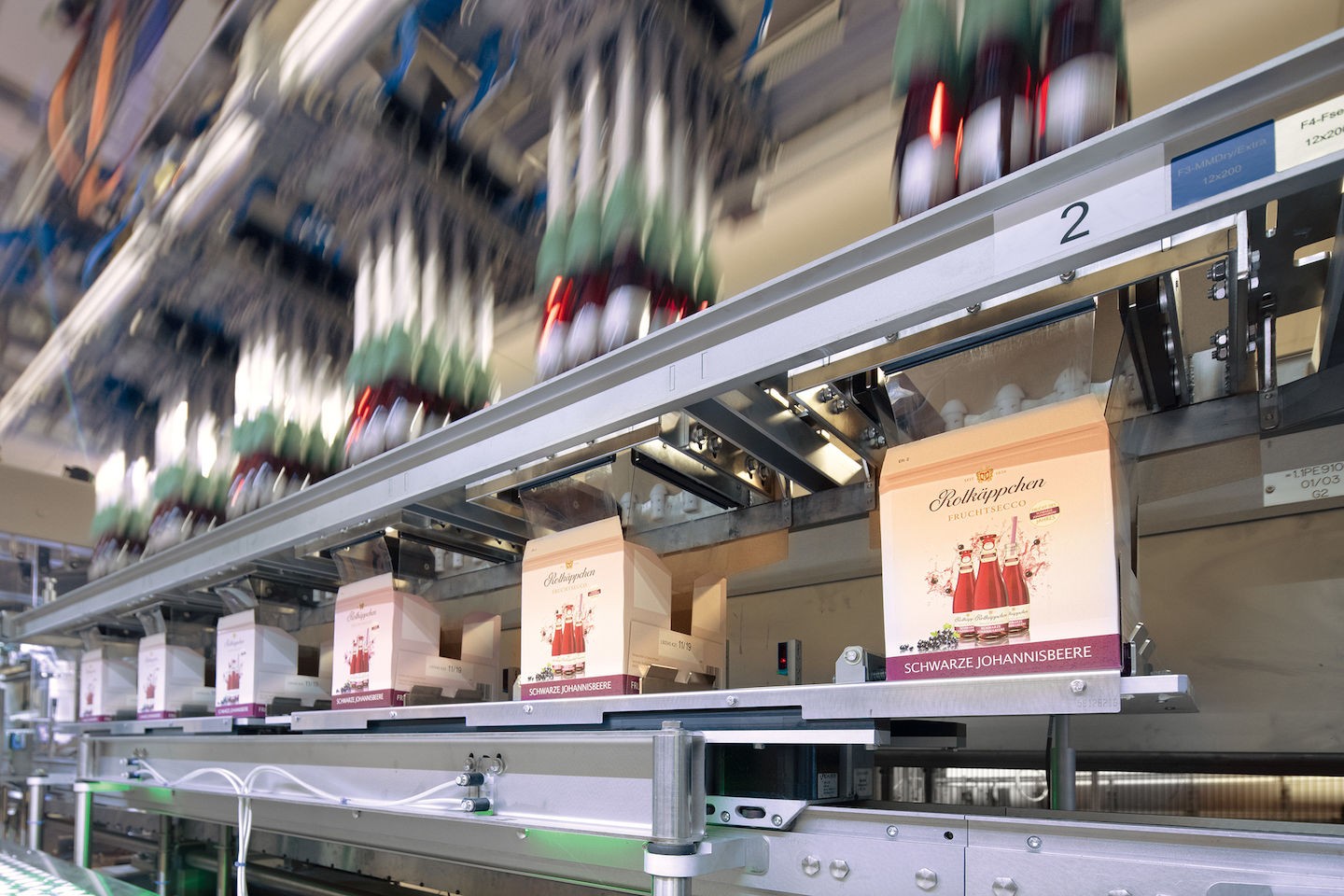 As many as 33,000 bottles per hour are placed by the KHS pick-and-place packer in the cartons erected by Schubert sub-machines.

The Innopack TLM system, installed in late 2018, includes 13 sub-machines, and is an impressive 33 m (108 ft) long. This is anything but small, but the combined packaging system scores on performance, quality, and adaptability on several counts, and its flexibility to cover all sorts of formats make the space efficiently spent.

“Compared to our previous standard we’ve doubled the line capacity for our gift packs of one and two bottles and can now package up to 33,000 bottles an hour,” reports Grebe, who thus far has run the machine in two-shift operation. Even so, speed is not everything, as he is keen to emphasize. “While a shipping carton of 24 can get away with the odd tiny flaw, we want 100% quality for our gift packs, so there’s practically no leeway here.” After all, the person receiving the gift should have fun unpacking it, for we all know that beautiful wrapping makes a gift all the more enjoyable.

Speaking of gift packs, in the case of gift packaging for the MMchen sparkling wine, for example, up to 10 of the 13 sub-machines can be used. In the first two sub-machines, F3 robots take up to 550 blanks/min from the magazine, depending on the desired output. Then, dF2 robots pick up the individual packs lying in a row, straighten them for correct orientation during transfer, and place them on a Transmodul for further processing. On the way to the next sub-machine, the tabs are glued. There, F2 robots seal the underside of the gift packs, stand them up and place them in rows of two on another Transmodul line. The KHS packer feeds the small bottles and carefully places them into the open top gift packs. In the next two sub-machines, four F2 robots then also seal the top of the packaging and place it on one of two further Transmodul sections for pre-grouping.

Shortly before the end of the packaging process, the shipping cases come into play: similarly to the gift packs, flattened, die-cut shippers are unstacked, erected, and placed on their own Transmodul line. In the second to last sub-machine, two F2 robots lift and transfer the prepared MMchen into the outer cartons – in four groups of six products. The Schubert machine fills up to 23 cycles/min, with three Transmodul lines working in parallel. To ensure that Rotkäppchen-Mumm can finally transport everything safely to the customers, the tabs of the large outer cartons are also glued and closed on the upper side.

The various sub-machines are linked by Schubert’s patented Transmoduls. Thanks to their inductive (wireless energy transfer) energy supply and wireless transfer of data and signals they glide back and forth on their rails along the entire line without interfaces. Maximum availability and the best possible efficiency are ensured by a considerable reduction in the number of mechanical parts. 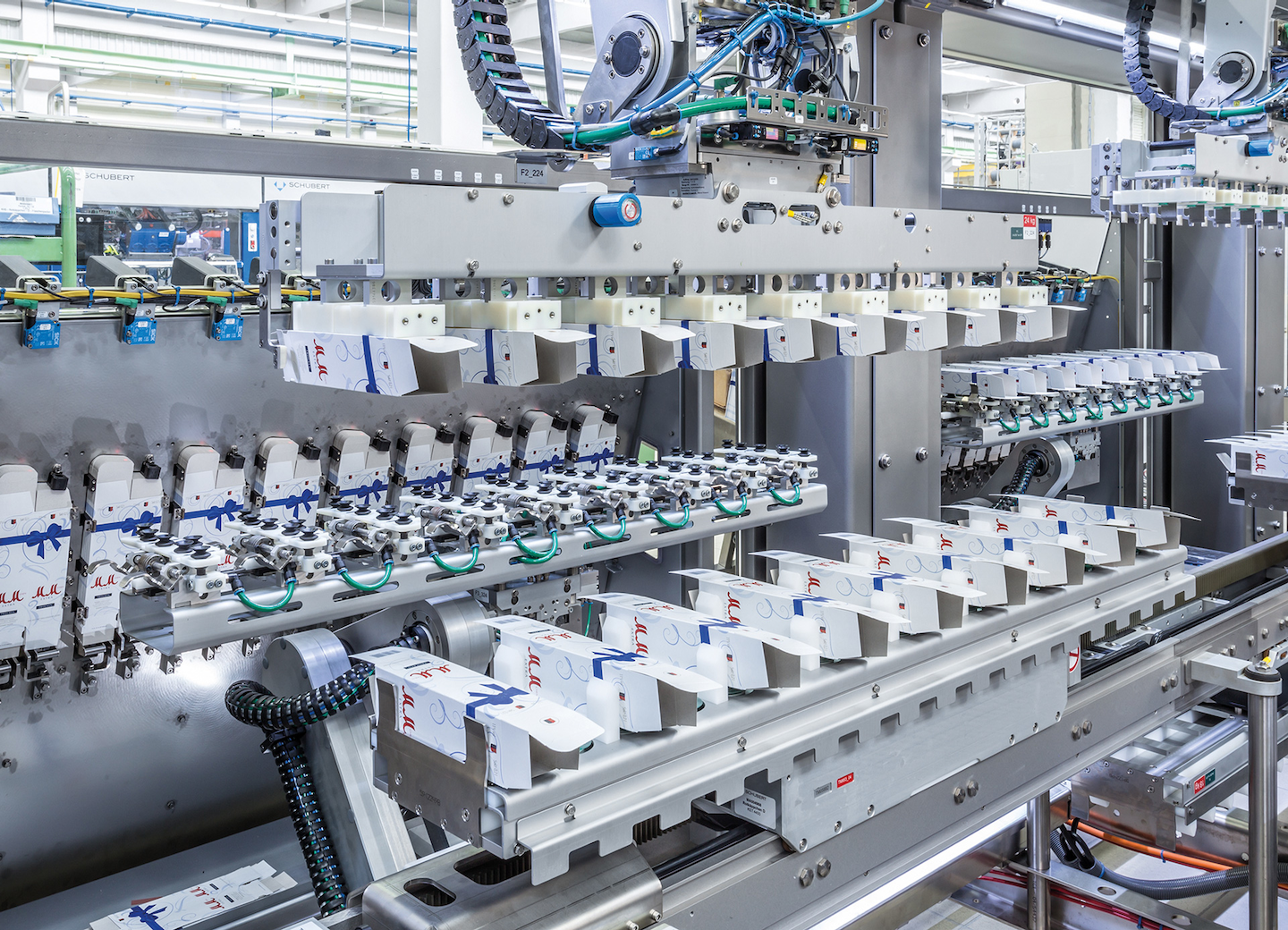 F3 robots de-stack the blanks for the gift packages from the magazine. F2 robots erect the boxes during transfer and place them on the Transmodul.

Tight timelines for the install

One can imagine that the planning, installation, and commissioning of such a complex machine was a huge challenge for all involved. “The time slot for installation was extremely ambitious,” says Max Schwaiger, who is responsible for Packaging Product Support at KHS. “Thanks to our good project management we were able to keep to the deadlines. This wasn’t just a matter of course as the growth in the number of formats during the process resulted in a certain level of complexity.” Owing to the limited space at the final place of installation in Eltville the system had to be completely dismantled and brought into the building horizontally. With the help of 3D simulation, calculations were also made with millimeter accuracy as to how much space the machine column on the pick-and-place packer would need during erection of the machinery. In a work of absolute precision, the ceiling grid only had to be dismantled and cut out at this point.

Prepared for the future

The most important criterion for the winery was flexibility. As such, the machine is designed in such a way that only a few format changes are necessary, tools can be changed quickly, and the system can absorb new packaging variants that may be implemented in the future. Ready for delivery to customers: The shipping cases containing the gift packaging are sealed by F2 robots.

“It was extremely important for us to know that our new packaging machine would enable us to meet all the requirements of the retail trade for many years to come,” says Joachim Engler, Technical Manager at Rotkäppchen-Mumm.

“I’m convinced that we’re also well-able to meet future demands from the retail trade with our new technology,” Grebe adds. “One prospective option could be the packaging of 0.75-liter wine bottles, for instance, and also new format sizes, such as packs of three or five.” Another major aspect of the machine’s flexibility is that it has been designed so that only a few format changeovers are necessary and the tools can be switched over relatively quickly. “We convert the machinery a maximum of four times a week. Depending on whether we’re making a hard change from fruit secco to sparkling wine, where we have to change over several Transmodul plates, or just switching the heads on the KHS pick-and-place packer, this only takes 30 to 90 minutes,” Grebe says.

Thanks to the Innopack TLM from KHS and Schubert, the wine producer benefits from a variety of formats that no other manufacturer could have implemented in a single machine. Last but not least, it is important to note that this new system works twice as fast as the previous machine of the sparkling wine, wine and spirits manufacturer.

“[KHS and Schubert] make a really strong team," Grebe observes. "We’d never have come up with the idea of Schubert and its Transmoduls on our own as we associate these with totally different branches of industry–from pharmaceuticals to candies. Only in conjunction with KHS’ expertise in the beverage sector and particularly in the handling of bottles have we found the perfect solution.” For Rotkäppchen-Mumm one big success factor was also that there was only one point of contact in KHS’ system of project management."

In the meantime, the new technology also has the system operators convinced.

“Over the years our colleagues of course build up a kind of emotional bond with their old machines which can be ‘knocked back into shape’ with a hammer if need be," Grebe says. "The overall function and look of the new machine are so fascinating and convincing, however, that initial skepticism has long given way to total enthusiasm.” -PW 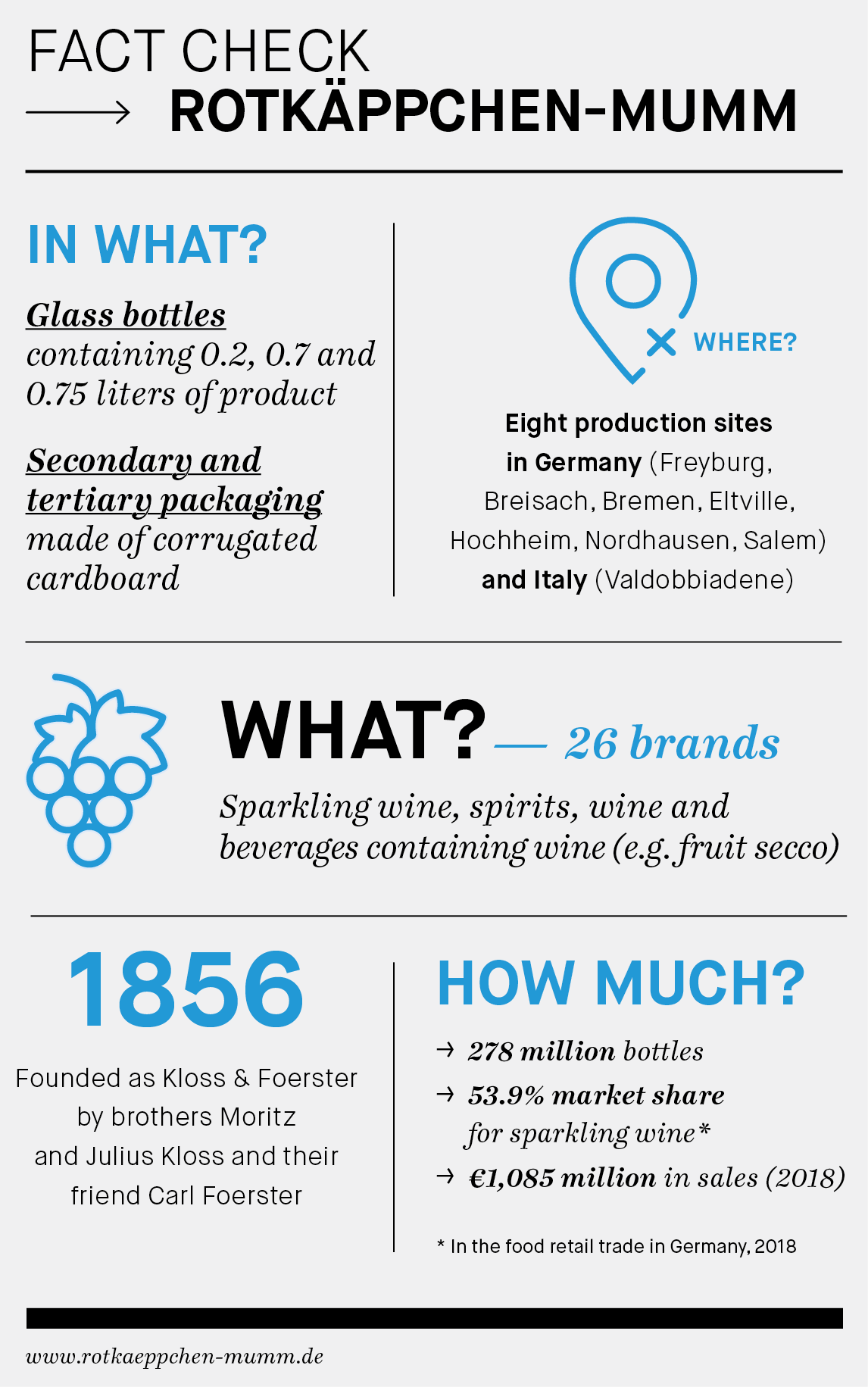 Additional projects are planned for the site over the next several years to support the company’s growth initiatives in the retail and foodservice markets in the U.S. and abroad.
Morgan Smith
Aug 9th, 2020

Goals originally set in 2008 and refreshed in 2015 were among the most ambitious in the industry.
Morgan Smith
Aug 8th, 2020

Recalculating for a Better New Normal by Year End

From pandemic preparedness certification to augmented reality tools, food and beverage manufacturers are embracing new tools. Plus see how Nestlé uses smart glasses to work on complex projects at its facilities during the coronavirus crisis.
Joyce Fassl
Jul 29th, 2020

Are You Earning What You Should (or Could) Be Earning?

A new book reveals how “future-back” thinking—defining what the company will look like decades from now and working backwards—can encourage innovative ideas that will create breakthrough growth.
Stephanie Neil
Jul 24th, 2020

A switch to air pressurizing the tankers, instead of using tanker truck pumps, resulted in nearly 100% of product to be emptied from each tanker load.
Joyce Fassl
Jul 24th, 2020

In an effort to cut costs, Coca-Cola is cutting underperforming brands, products, flavors and packaging that are not delivering on returns.
Kim Overstreet
Jul 22nd, 2020

The move is being taken to bring a more structured approach to innovation and the development of additional products, while enabling the company to build on the strength of its brands.
Morgan Smith
Jul 22nd, 2020
More in Home

The certification provides assurance for the food and beverage supply chain and consumers that companies are committed to establishing and maintaining best practices.
Joyce Fassl
Jul 21st, 2020

Ted Speas will assume responsibility for all aspects of the company’s distribution and logistics business unit.
Morgan Smith
Jul 20th, 2020

You Can Always Get What You Want From RFPs

CDC Update: COVID-19 Among Workers in Meat and Poultry Processing