You better “THINC” about your future workforce

As manufacturers look for creative ways to engage the iGeneration, new academic models are emerging that teach more than just mechatronics. 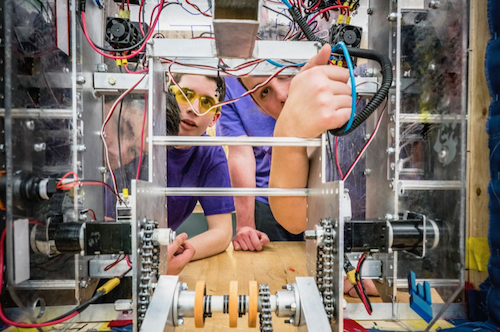 THINC College and Career Academy, a charter school in LeGrange that approaches education with business and industry needs in mind.

Riley Morgan is a hard-working, respectful 17 year-old from Georgia who likes cars, outdoor sports and video games. He’s a typical teenager in many ways, except for a special skillset that sets him apart from most of the 65 million others who make up Generation Z—also known as the iGeneration (iGen). He is a mechatronics major who is OSHA certified making him a coveted job candidate in the manufacturing industry.

Riley is a senior at the THINC College and Career Academy, a charter school in LeGrange that approaches education with business and industry needs in mind. The school offers five career pathways, including business and marketing, energy systems, STEM, health and sports medicine and mechatronics—all of which were selected through an employer survey.

Employers, in fact, are a big part of the process. THINC helps companies develop internships for high school students, an effort that is geared toward fostering a future workforce by engaging with kids at an early age. Educators and employers alike are trying new approaches when it comes to capturing students’ attention before they reach college. So THINC accepts students into its programs in the 9th grade, which is a good starting point. Each pathway program is three semesters, allowing students to take multiple pathways over four years, or return to their traditional high school.

For Riley, it was his sophomore year, when he entered the mechatronics program at THINC, that was a life-changing moment.“I had no idea what manufacturing was before I entered ninth grade,” he said, referring to his transition from his previous school to THINC Academy. “In eighth grade I was focused on video game designs, but as soon as I got to high school, I realized it probably wasn’t for me.” This program saved him time, money and effort, he said. “Without THINC I would have gone to college for video design and would have found out it’s not for me. Instead, I found what I enjoy doing, which is engineering, robotics and focusing on mechanical and electrical, as well as gears and conveyors, all of the different systems that make a machine move.”

Indeed, it was his love of cars and his role model—his grandfather—that first influenced Riley. His grandfather spent a career in the automotive industry, often telling Riley stories about what he was working on and allowing his grandson to tinker with tools. These things sparked Riley’s interest at a young age as he wondered how it was that a piece of metal could move on the highway. At THINC, he could dig deeper. The students have a hands-on approach, looking at schematics and stripping wires, connecting power supplies and playing with PLCs.

But just as vital to the program are the soft skills that are taught in the classroom. The academic team feels it is just as essential to understand the mechanics of life, including: attendance, teamwork, problem solving, initiative, productivity, communication, cooperation, respect, appearance, attitude, sense of urgency, adaptability and attention to detail.

But just as vital to the program are the soft skills that are taught in the classroom. The academic team feels it is just as essential to understand the mechanics of life.

The students aren’t always too keen on this part of their schooling, admitted Riley, but, now, as a senior, he understands the enormous value of knowing the meaning of attendance and attire, for example. “When I first came here I was iffy about it, but I realized this would get me prepared for work and even college. Knowing how to dress, knowing I need to be in class or get to work on time, and knowing how to talk to people and having a strong work ethic is great knowledge to have at a young age.”

Riley, Carlisle said, is one of the many “stars” that this school—which is only in its fourth year—has proudly produced. These young adults are quickly recruited by the local corporations. Riley is currently working in a special apprenticeship program with Kia where he is moving between departments, working on general assembly of cars to paint maintenance to supplier quality and production control.

His goal is to be hired on to the Kia Motors Manufacturing Georgia team in the future. “I think I’d be a good addition,” he said.

Having upfront clarity into needs and establishing standards for what to use (and why), are the two biggest shortcomings cited by Vision 2025 participants in the Request for Proposal process.
Kim Overstreet
Jan 22nd, 2020

PTI’s Seal-Scan and Seal-Sensor test packaging seals in a noninvasive, nondestructive manner both on and off the production line, respectively.
Maya Norris
Jan 22nd, 2020

Modified Atmosphere Packaging is prevalent among participants of a new PMMI Business Intelligence report, but technologies such as High Pressure Processing (HPP) are continuing to expand as well.
Kim Overstreet
Jan 20th, 2020

The Power of Iconic Package Design

Oatly Frozen Dessert is Plant-Based from Product through Packaging

Using oats rather than cow’s milk for its frozen dessert, Oatly also opts for a paperboard ice-cream pint container with a coating made from sugarcane rather than petroleum.
Anne Marie Mohan
Jan 15th, 2020

How to Identify Emerging Leaders

As the generational workforce shift looms with more than 2.7 million baby boomers preparing to retire, OEMs need to bridge the generational divide, retain tribal knowledge, and ensure a lasting legacy. Here’s how to do it.
Natalie Craig
Dec 12th, 2019

Products on the list include those in the food and beverage, personal care, OTC, and petcare categories and reflect consumer trends such as good-for-you ingredients, convenience, and a move away from traditional beverage products, among others.
Anne Marie Mohan
Jan 13th, 2020
More in Home

Learn what Vision 2025 participants at PACK EXPO Las Vegas had to say about improving asset reliability in their organizations, and where they are on the road to continuous improvement.
Kim Overstreet
Jan 10th, 2020