“The slowdown is real, it’s happening all around the world, it’s coming to our shores, and in some segments of the economy, it’s here already here." 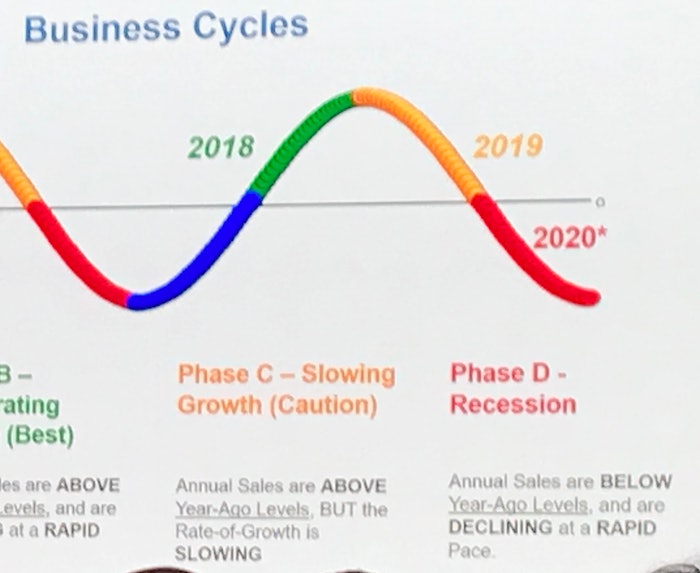 “The slowdown is real, it’s happening all around the world, it’s coming to our shores, and in some segments of the economy, it’s here already,” says Alex Chausovsky, director of speaking services, ITR Economics. “Despite the good feeling, the strong customer orders, and the positive momentum, that mindset that you had from 2018 needs to change to a more conservative one, a more defensive one, and for slower growth in the U.S. economy overall.”

Growth will continue, of course, but it's going to feel slower compared to 2018. The growth for 2019 is expected to land around 0.9 percent GDP, relative to a 3-plus percent growth for 2018. Chausovsky said this isn’t unexpected, given our decade-plus of nearly unprecedented expansion after the Great Recession market correction event of 2008. And even more recently, the continued expansion of GDP over the past two and a half years have been, in themselves, remarkable developments, though perhaps artificial due to a short-term tax reform that looks to experts like Chausovsky to be far more expensive than helpful when perceived via a longer view.

“The passing of the tax reform bill of 2017 added about six to nine months of acceleration to the usual U.S. economic business cycle,” he says. “But that boost, that injection of stimulus we gave ourselves, has ended. We’ve reached the back side of the cycle, and we’re not expecting to see the benefits of tax reform any further of 2019.”

So according to ITR, the U.S. economy has peaked in terms of ITR space within the usual two- to four-year cycle. The good news, however, is that the impending slowdown isn’t expected to be particularly significant. It is only expected to feel different than the recent artificially-supported boom years. And after the mild slowdown, another rising trend is predicted in 2020 to 2021.

Further, these trend lines are expected fluctuations; now is the time for manufacturers to settled down and catch their breaths after the recent expansion.

It bears mention that not all sectors will bounce back the same. If the Great Recession of 2008 is any indicator (and it is a classic case to be heeded, according to Chausovsky), U.S. manufacturing doesn’t enjoy the same degree of bounce-back that may exist at the consumer level. Near record employment means people have jobs, have expendable income, and the lion’s share of the economy is just that, end consumers consuming. But the industrial economy is not the same as the consumer economy. B2B and manufacturing upstream of Joe Schmoe on the street may have a more tepid relief from the impending malaise, just as it has since 2008. Data now shows that in the portion of 2020, the first two to three quarters, upstream manufacturing sectors will actually drop into negative territory, the textbook definition of a recession (albeit brief).

“Essentially, the slowdown will be felt more acutely by manufacturing and B2B, and more acutely the further removed from the end-consumer,” Chausovsky says.

Bottom line? When you think about deploying capital on your own resources, your promotions and your marketing efforts, understand that while the consumer-facing economy might not feel much of a blip, there will be a bit more pain upstream. The industrial economy is less robust than the consumer side. Temper and carefully plan expectations with exposure to the B2B side (that’s you, OEMs and machine builders).

Look into opportunities to lock into longer term revenue opportunities to get you through this impending soft patch, according to Chausovsky, is advisable. But the flipside of that is that at these low points in the cycle, prices tend to be lower — for people, equipment, for everything, really. Don’t lock in long-term spending right now, Chausovsky advises, look for cheaper opportunities as they arise 12 to 18 months from now.