Where is food safety technology headed next?

Whole genome sequencing is considered to be the next generation in food safety and food prevention. 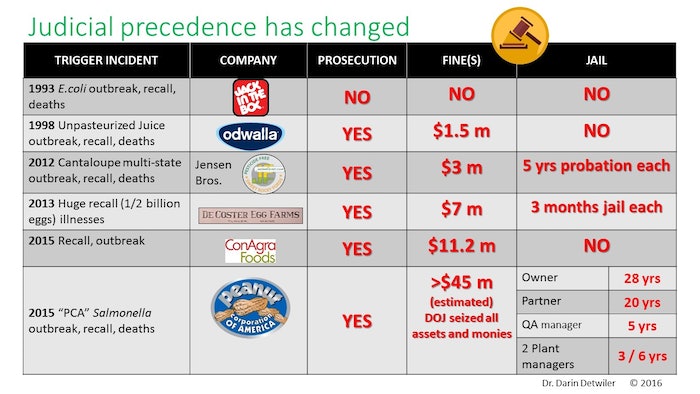 Every year, 48 million Americans become sick, 128,000 are hospitalized and 3,000 die from mostly preventable foodborne illnesses. And, while many food and beverage processors place a significant priority on food safety, some do not, according to Dr. Darin Detwiler, director of regulatory affairs and food industry, and professor of regulatory policy, economic and history of food for Northeastern University, Boston.

“The goal of the [Food Safety Modernization Act] is for the FDA to take a more proactive approach to preventing illnesses and deaths,” Detwiler says. “Further, the goal includes forming a stronger, integrated food safety partnership with the states. Unfortunately, this will take much support in terms of funding, training, new state legislation, increased staffing and more universal certification of staff and labs.”

That’s why FDA is investing in whole genome sequencing (WGS) technology to identify pathogens isolated from food or environmental samples during foodborne illness. WGS is considered to be the next generation in food safety and prevention.

PulseNet, a network run by the Centers for Disease Control and Prevention (CDC), brings together U.S. health and food regulatory agency laboratories to combat infectious disease outbreaks. Using WGS technology, FDA can quickly and more accurately identify a specific strain of a pathogen and its source in hopes of stopping an outbreak sooner and avoiding additional illnesses.

According to Detwiler, now that “food labs are using new, whole genome sequencing to better and more quickly pinpoint sources of outbreaks,...we see a higher quantity of outbreaks that are smaller in size and scale.” (In other words, outbreaks are often found before they get too big.)

Food recalls are costly—from the product recall itself to recouping brand loyalty and consumer trust to any fines/penalties that come with the recall. Likewise, the economic impact of a disease outbreak caused from such foodborne illnesses can be detrimental to the future of a company and the food and beverage industry as a whole.

For example, Jack in the Box lost millions in sales revenue after its outbreak in 1993. An E. coli outbreak in 2000 led to Sizzler filing for bankruptcy. And, a 2002 E. coli outbreak forced ConAgra Foods to recall over 19 million pounds of ground beef, what is said to be the third largest recall in U.S. history.

After each recall event, Detwiler says stock values decreased and didn’t return to positive values until 264 trading days later, leading food safety experts to believe that it takes almost an entire year for a food processor to fully recover from its food safety event.

“Today, no food is untouchable when it comes to foodborne pathogens,” says Detwiler. “Outbreaks tied to non-meat foods have been on the rise, as have outbreaks tied to foods never before considered threats (ice cream, peanuts, sprouts, cucumbers, cantaloupes, leafy greens, flour, etc.

Staying on the Cutting Edge

The COVID-19 pandemic has shown how essential food plant workers truly are and demonstrates the need for a digital transformation in food and beverage processing.
Joyce Fassl
Feb 9th, 2021

The agency’s vision is based on three fundamental tenets: It must be people-led; it should be FSMA-based; and solutions should be technology-enabled.
Jeffrey T. Barach
Apr 15th, 2020

Food facilities covered by the rule will be required to develop and implement a food defense plan that identifies vulnerabilities and mitigation strategies for those vulnerabilities.
Mar 5th, 2019

Both draft guidance documents will be open for public comment for 180 days.
Oct 19th, 2018

Will work to help ensure food safety throughout the supply chain
Aug 21st, 2018

Other installments to be released within the next six months.
Jun 21st, 2018

Forward-thinking approach to legislation can be cost-saving measure

Companies who make minimum effort to meet packaging legislation deadlines could end up paying more in the long term.
Kim Overstreet
May 25th, 2018

FDA expands its Data Dashboard to include FSMA

The association cites regulations that are overly burdensome, outdated and barriers to innovation.
Feb 6th, 2018

Two of the documents will help industry meet the requirements of the Foreign Supplier Verification Programs (FSVP) regulation.
Jan 29th, 2018

Training is critical for the success of FSMA

The agency is exercising enforcement discretion to allow time to consider changes or other approaches to address concerns regarding the application of these provisions.
Jan 4th, 2018

Regulatory challenges a burden on mid-size and small CPGs

The web pages for the two preventive controls rules – which had the first major compliance dates – have also been updated.
Oct 23rd, 2017

Small Entity Compliance Guides can help farmers determine whether they are eligible for a qualified exemption.
Sep 5th, 2017