Six-pack packaging with a purpose

By using byproducts of the beer brewing process, this packaging goes beyond recycling and strives to achieve zero waste. 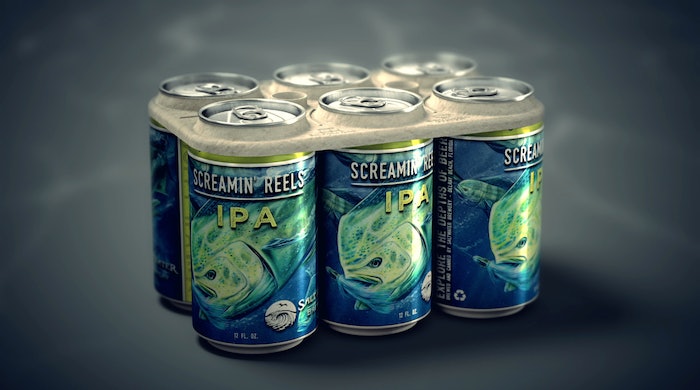 Americans drank 6.3 billion gallons of beer in 2015, and 50% of that volume was sold in cans to preserve flavor. Cans are commonly packaged with plastic six-pack rings because they are lightweight and easy to carry. Unfortunately, these plastic six-pack rings can end up in oceans and pose a threat to wildlife because of the potential for entanglement and ingestion.

“By using byproducts of the beer brewing process such as barley and wheat, this packaging goes beyond recycling and strives to achieve zero waste,” says Gove. The product is pending patent approvals, so the complete list of ingredients used in making the Edible Can Rings could not be divulged.

The Edible Six Pack Rings are 100% biodegradable, compostable and edible, and if not ingested, the product takes 60 to 90 days to disintegrate when in contact with water.

Production cost of the rings, says Gove, is expected to be between 10 and 15 cents per piece, which he says is on par with existing recyclable plastic alternatives. “If most craft brewers and big beer companies implement this technology, the manufacturing cost will drop and be very competitive compared with the current plastic solution.”

Saltwater Brewery plans to deliver the product to the market by the end of the year, pending regulatory approvals. And while currently focused on the edible can rings, Gove says the company would like to develop additional single-use items in the future.

Highlights at the company’s booth include its new HC-A-V checkweigher, which features vision control for expanded vision inspection, and the next generation of its Modular Multilane System, MMS 2, a 50% smaller model with a modular, plug in-and-out design
Stephanie Neil
Sep 28th, 2021

Allows pallets of all sizes to be placed in the Tippmann Group QFR Zone system
Joyce Fassl
Sep 28th, 2021

PMMI Media Group editors discuss some of the new technologies and trends found on the show floor during day one of PACK EXPO Las Vegas. Among them are cobots, cannabis packaging, recyclable blister packs, and more.
Sep 28th, 2021

With more workers attracted to remote work opportunities, manufacturers must recruit and maintain top talent for plant floors. An organization’s strengths and weaknesses can determine whether a potential employee chooses to join and remain at the company.
Stephen M. Perry, Ph.D.
Sep 23rd, 2021

The excitement for the show is building for the industry to reconnect in Las Vegas next week. Hear what these solution suppliers are doing to welcome the industry back.
Sep 16th, 2021

Smithfield’s Switch from Cardboard to Reusable Plastic Totes Pays Off

PepsiCo Announces Strategic Transformation With Sustainability at the Center

The pep+ (pep Positive) transformation will create growth and value for PepsiCo by operating within planetary boundaries and inspiring positive change for the planet and people.
Morgan Smith
Sep 15th, 2021

To pass inspections and prevent recalls, food manufacturers must focus on physical contaminant elimination, improving practices, and developing a culture of food safety with buy-in from all staff levels. All this and more on today's Take Five.
Melissa Griffen
Joyce Fassl
Sep 10th, 2021

Siwak will be responsible for driving the strategic growth of Ferrero’s expanding market share and transitioning the business from being part of an international region to its own distinct area.
Morgan Smith
Sep 7th, 2021