The winners of Profood World’s 2018 Sustainability Excellence in Manufacturing Awards prove that eco-friendly activities and profitability go hand in hand. ProFood World honored the award winners in Chicago during ProFood Tech 2019 last March, where they shared how their operations go beyond environmental compliance and drive improved performance through sustainability.

In the Program Category, Smithfield Packaged Meats’ facility in Kinston, North Carolina, earned first place for making some simple, cost-effective adjustments to its smoker to prevent excessive liquid smoke loss. Prior to initiating the project, the company lost about 1.62 gal per hour of liquid smoke when it applied the liquid smoke to its hotdogs. The liquid smoke dripped off the hotdogs and seeped into the floor drain, causing Smithfield to lose about 38.88 gal of liquid smoke per day at a cost of about $22.57 per gal, or the equivalent of more than 10,000 gal per year. In addition, it increased the company’s surcharges for wastewater treatment.

According to Plant Maintenance Supervisor Kevan McCance, Smithfield decided to install a blower and air knives that it wasn’t using on one of its dryers onto its smoker unit. The blower system with air knives blows the excess liquid smoke off the baskets holding the hotdogs into a smoker holding tank. By making this simple change to its smoker, Smithfield reduced its liquid smoke loss by 56 percent and saved more about $129,000 in a year by capturing the excess liquid smoke. Because the company already had the blower and air knives on hand and only needed to purchase about $300 of parts for the installation, the return on investment was immediate.

After the project, McCance said liquid smoke loss was down to 16.8 gal per day, 84 gal per week and 438 gal per year.

Land O’Lakes’ facility in Kent, Ohio, received the second-place award in the Program Category for converting butter into energy. In 2016, the Kent facility spent $41,000 in environmental cleanup for its 10-ton trash compactor, which leaked butter, and removing it three times a week. The company decided to find a better way to discard its packaged butter products that it couldn’t sell for various reasons, including line casualties, lab samples and out-of-spec products, said Josh Becking, EH&S manager for the facility, which produces 80 mil lb of butter per year.

Instead of putting the products in its trash compactor, Land O’Lakes now works with a company that has an industrial shredder with a high-pressure, high-temperature press on the back side of it. As the shredder heats up, it presses the melted butter, which goes through a screening device and to an anaerobic digester. Micro-organisms in the anaerobic digester consume the butter, producing electricity, heat and methane gas. The plastic from the products are recycled. Land O’Lakes no longer has environmental cleanup fees, saving $41,000 a year. It only removes the compactor waste once a week, compared to three times a week in 2016 — reducing pickup charges by two-thirds. The company diverts 282 tons of butter from the landfill to the anaerobic digesters, generating 149,000 kWh of electricity in 2018, which is equivalent to 1.5 percent of the total kWh that the Kent facility uses every year.

Becking told the ProFood Tech audience how the facility pitched the project to its corporate headquarters. Engineer Hallie Davidson from Land O’Lakes headquarters was assigned to oversee project logistics for nine months and lived in Kent during the project. Davidson also developed a sanitation process for the containers that needed to return to the plant and worked with the energy from the waste supplier to obtain a zero cost to the plant, getting it to match the cost the facility was paying to go to landfill.

ProFood World awarded second place to Campbell Soup Company in the Project Category for partnering with BNB Renewable and SunPower to install a 4.5 MW solar system at the company’s world headquarters in Camden, New Jersey. The project features a combination of SunPower’s rooftop, car port and ground-mount solar solutions as well as electric car charging stations.

As the largest solar array in Camden, the system will supply the equivalent of 20 percent of the annual energy demand of Campbell’s headquarters. Campbell signed a 20-year purchase power agreement (PPA) with BNB, which allows Campbell to purchase all the electricity generated by the solar project at a predetermined rate lower than its current electrical rate from the local utility company. In addition, because the project was structured as a PPA means, there was zero capital investment for Campbell.

“We wouldn’t have been able to do it without looking at a PPA,” said Cheng. “The big takeaway is that it’s zero capital.”

Smithfield Packaged Meats’ facility in Sioux City, Iowa, also garnered a second-place award in the Project Category in a tie with Campbell for replacing its four water-intensive chip smokers with waterless smokers for its smoked meats. The new units reduce water usage by 98 percent, saving more than 1 million gal of water a year.

Internal statistics showed that water usage was on the rise, telling Carter Hanson, director of environmental affairs for Smithfield, that there was work to be done. “If you don’t collect data and analyze it, you don’t know where you are,” he stated. “And, if you don’t measure it, you can’t manage it.”

To stem the flow of lost gallons of water in the smoking process, Smithfield decided to install new smoke generators from Friedrich that use very little water.

“When you factor out 703 gal per unit per day, six days week, over 52 weeks a year at 98 percent efficiency of where we were before, we ended up saving a million gal of water because we converted four units over to the new smoke generator. It’s about a $7,000-a-year savings,” Hanson stated.

The meat processor didn’t start the project with the intention to save money, according to Hanson. “We did this to start moving the needle to get away from all the water we use.”

Return on investment is expected after 6.2 years. Hanson said it was a simple, easy project. “Walk around, look at where you see water pouring into a floor drain, and ask yourself, ‘Is there something else we can do there?’” Hanson told the ProFood Tech audience.

“Compressors are about 25, 30 percent of our total electric bill,” said Jeff Blankman, sustainable manufacturing manager. “So, they’re the biggest single load we have in our plants.”

When compressors get to the end of their lives, Blankman said it’s a good opportunity to look at them from a sustainability perspective to see if improvements can be made. “At the same time as the plant’s compressors were at the end of their life, they also had old hot water heaters on them, and they were having problems where they were running out of hot water,” he adds. The old water heaters were also causing increased changeover time.

McCormick’s new system is comprised of one fixed speed and one variable speed compressor so that air output modulates to match demand. The heat exchanger and storage tank capture waste heat from the compressor cooling loop to provide free hot water. The company expects the new compressor system will consume about 30 percent less electricity than the old compressor system because of the variable speed drive compressor and a dryer system that uses the waste heat from the compressors as the source of energy for drying. The free hot water and installation of on-demand water heaters reduce natural gas consumption by 50 percent and eliminate hot water outages, thereby increasing production cycles.

For information about submitting entries for the 2019 Sustainability Excellence in Manufacturing Awards, visit www.profoodworld.com/awards/sema.

Learn more about the latest sustainability innovations to improve your operations at PACK EXPO Las Vegas from Sept. 23-25 at the Las Vegas Convention Center. Register by Aug. 30 to save 70 percent off the registration fee.

Going green? Get ready to enter the 2019 Sustainability Excellence in Manufacturing Awards

ProFood World wants to hear about your green projects. The submission deadline for the 2019 Sustainability Excellence in Manufacturing Awards is Jan. 24, 2020, for all sustainability projects and programs completed from November 2018 through Dec. 31, 2019.

The next Sustainability Excellence in Manufacturing Awards ceremony will be held at ProFood Live! 2020, scheduled for June 9-10, 2020, at the Chicago O’Hare Marriott. Sustainability Excellence in Manufacturing Awards submission rules and downloadable entry forms are available at www.profoodworld.com/sema-awards-details. Watch videos of past award-winning projects at www.profoodworld.com/awards/sema.

Later this year, more details about the ProFood Live! conference program will be announced. 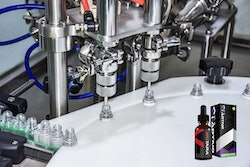 Bottle filling system includes as many as four filling stations