Women in the Workforce - Fixing the "Broken Rung"

A five-year McKinsey study reveals a focus on culture, diversity, and even automation as ways to help advance women’s careers across all industries, including manufacturing. 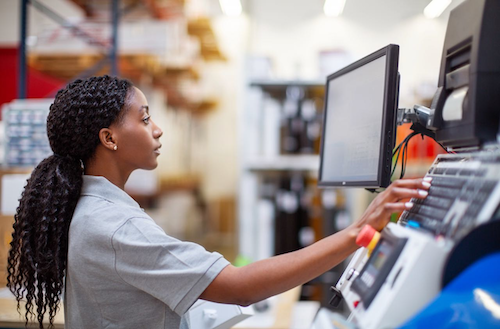 According to a McKinsey report: The broken rung results in more women getting stuck at the entry level and fewer women becoming managers.
Getty Images

In an effort to understand what’s going on, McKinsey Global Institute and LeanIn.Org set out on an exhaustive research project that began five years ago with updates each year. Over the years, close to 600 companies have participated in the study and more than a quarter of a million people were surveyed on work experiences. This past year, the Women in the Workplace 2019 report is based on information from 329 organizations. The research includes a survey of more than 68,500 employees to understand day-to-day work experiences.

Here’s what they found: Progress is being made, specifically for women in leadership positions. In the C-suite, representation of women has increased from 17% to 21% since 2015. Still, women—and particularly women of color—are underrepresented at every level.  And, it is not the “glass ceiling” that is preventing women from rising through the ranks, rather, it is the “broken rung” effect.

According to the report: “Conventional wisdom says that women hit a glass ceiling as they advance that prevents them from reaching senior leadership positions. In reality, the biggest obstacle that women face is the first step up to manager, or the broken rung. The broken rung results in more women getting stuck at the entry level and fewer women becoming managers. As a result, there are significantly fewer women to advance to higher levels. To get to gender parity across the entire pipeline, companies must fix the broken rung.”

People may say it’s a two-way street and that women are looking for more work/life balance and therefore are satisfied with lower-level jobs. But the data points to a very different conclusion.

“Despite conventional wisdom, women are staying in the workforce at the same rate as men,” said LeanIn.Org president Rachel Thomas during a “Secrets of Wealthy Women” Wall Street Journal podcast. “Despite conventional wisdom, 10 years ago, 20 years ago, research would have said that women did not negotiate as often as men, that they didn’t ask for promotions as often as men. And yet, we see year over year that is not the case. The story the data tells is that women are leaning in and doing their part. So what we found is that it really is a story about what companies need to do better.”

Companies need to focus on culture and treat diversity and inclusion as a business imperative, putting best practices in place that eliminate bias from hiring and promotions.  According to McKinsey, “inclusiveness is fundamental to enhancing gender parity and overall diversity, and results in financial and organizational performance.”

But women face yet another obstacle—or perhaps an opportunity—in automation.

Careers in the age of automation

A McKinsey companion report called “The Future of Women at Work: Transitions in the Age of Automation,” says that creative approaches are needed to help women seize new opportunities in automation or women could fall further behind in the work world.

Facing a skills gap, the industry is encouraging more women to enter into manufacturing to fill science, technology, engineering, and math (STEM) roles. However, globally, women account for only 35% of STEM students, according to the report. “A review of recently created occupations in the U.S. suggests that up to 60% of entirely new jobs such as roboticists and machine-learning specialists are in male-dominated fields.”

But if women can reskill as a way to meet the current STEM-based job demands, it could result in higher-paying careers. “Looking ahead to 2030, our scenario suggests that gender wage disparity may lessen slightly in certain mature economies if women are able to gain the necessary skills and successfully navigate transitions between occupations,” the report said.

It is now up to manufacturers to encourage and enable women to make these job transitions by supporting skill-building efforts, embracing more flexibility and mobility in these new roles, and providing an avenue for women to participate in the creation of technology as the industry begins to work in new ways to embrace the next-generation workforce.

It’s All About the Cost, Not the Price

Producer of Nature's Own, Wonder, Tastykake, Dave’s Killer Bread, and other bakery foods shuts down production at facility because of increase in the number of cases at the site.
Morgan Smith
Jul 9th, 2020

This new playbook from Packaging World showcases the trends, case studies, and how-to tips to help you make the best possible robot purchasing and application decisions for your operation.
Jun 29th, 2020

The company is investing $135 million on the project, which will create 110 new jobs in Augusta County, Virginia.
Morgan Smith
Jun 28th, 2020

Capitol Peak Partners and its affiliates, as well as KKR, will acquire virtually all of company’s assets.
Morgan Smith
Jun 27th, 2020

Hershey's Unwraps their COVID-19 strategy with employees and suppliers

Hershey’s Josh Becker sat down with PMMI’s Sean Riley to talk about a customer’s perspective on how Hershey is handling visits from suppliers, training and service issues.
Sean Riley
Jun 25th, 2020

A customer’s change meant these solids were no longer approved to be part of the cooker feed stream, but collaboration and information sharing with other Smithfield facilities paved the way for environmental savings at the company’s Crete, Neb. plant.
Joyce Fassl
Jun 24th, 2020

In addition, the agency is also integrating the lessons learned during this pandemic to ensure that the food supply is supported during times of crisis.
Joyce Fassl
Jun 23rd, 2020

This summer’s update to Plantweb Optics will include augmented reality capabilities to help users locate troublesome assets and correct issues with the aid of experts via real-time collaboration.
David Greenfield
Jun 23rd, 2020

Consumers in quarantine are snapping up HPP food and beverages because they offer extended shelf life and food safety as they wait out the crisis.
Maya Norris
Jun 18th, 2020

The company will mark the platinum occasion with a 12-month-long celebration.
Heat and Control, Inc.
Jun 16th, 2020

Tetra Pak announced its commitment to reach net zero greenhouse gas (GHG) emissions in its own operations by 2030, with the ambition to achieve net zero GHG emissions for the entire value chain by 2050.
Tetra Pak Inc.
Jun 17th, 2020

The newest guideline is Wet Salads, also known as deli salads. This addition is one in a continuing series of CPC initiatives to raise the awareness and use of HPP and be the voice within the industry.
Sean Riley
Jun 15th, 2020

Argentinian Coca-Cola bottler Reginald Lee works with same supplier for four bottling lines, the most recent of which handles hot-fill and carbonated drinks with efficiency and a high degree of automation.
Anne Marie Mohan
Jun 12th, 2020