Pyraser Landbrauerei, founded in 1868 in the Franconia region of Germany, recently invested in a KHS Innofill Glass DRS filler. 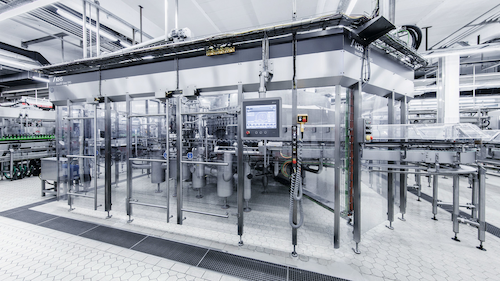 Among the key characteristics of the machinery that especially impressed the decision-makers at the brewery was its ability to keep residual oxygen values low. Also attractive is that the patented KHS DRS-ZMS filling system uses just 210 grams of CO2 per hectoliter of beer. “We need a lot less carbon dioxide than the usual quantity common to the market to yield the same or even better residual oxygen values,” says Mike Herrmann, KHS Sales Germany and the man responsible for the project.

Also special is that Pyraser closes its beer bottles with roll-on aluminum caps, which ordinarily means that more oxygen would normally be pressed into the bottle compared to the amount allowed with classic steel crown closures. This would be detrimental to the beer as the product would then age more rapidly. To minimize oxygen pickup, the KHS filler therefore blasts the aluminum roll-on caps with CO2 in the capper. This joint development with the brewery means that the very good oxygen values in the bottle are the same as those for crown closures.

Furthermore, the Innofill Glass DRS works with automatic CIP caps. “On the one hand, cleaning is considerably simplified as a lot less effort is needed for operation. On the other, the time saved as a result boosts efficiency in production,” says Master Brewer Helmut Sauerhammer. The number of manual interventions is reduced, as are toolless format changeovers thanks to hygienic QUICKLOCK fast-acting locks. The program is automatic and operated at the press of a button. Up until now employees had to place the CIP caps on the filling valves by hand. Cleaning processes can now be preset for specific times. They start automatically, with no manual intervention necessary. Any potential contamination of the filler, as could be the case where CIP caps are applied manually, is also prevented.

The new investment is also impressive with regard to sustainability. With its separate cooling circuit, the ECO vacuum pump significantly reduces water consumption, meaning that Pyraser Landbrauerei uses only 80 liters an hour instead of the previous 800.

Pyraser Landbrauerei fills up to 26,000 0.33-cL bottles of beer or a maximum of 24,000 bottles of soft drinks per hour – with no hitches whatsoever since commissioning. “I’ve never known the first filled product to be ready for sale as quickly as here,” says Saurhammer. “We’re delighted."

The company is investing $135 million on the project, which will create 110 new jobs in Augusta County, Virginia.
Morgan Smith
Jun 28th, 2020

Capitol Peak Partners and its affiliates, as well as KKR, will acquire virtually all of company’s assets.
Morgan Smith
Jun 27th, 2020

Hershey's Unwraps their COVID-19 strategy with employees and suppliers

Hershey’s Josh Becker sat down with PMMI’s Sean Riley to talk about a customer’s perspective on how Hershey is handling visits from suppliers, training and service issues.
Sean Riley
Jun 25th, 2020

A customer’s change meant these solids were no longer approved to be part of the cooker feed stream, but collaboration and information sharing with other Smithfield facilities paved the way for environmental savings at the company’s Crete, Neb. plant.
Joyce Fassl
Jun 24th, 2020

In addition, the agency is also integrating the lessons learned during this pandemic to ensure that the food supply is supported during times of crisis.
Joyce Fassl
Jun 23rd, 2020

This summer’s update to Plantweb Optics will include augmented reality capabilities to help users locate troublesome assets and correct issues with the aid of experts via real-time collaboration.
David Greenfield
Jun 23rd, 2020

Consumers in quarantine are snapping up HPP food and beverages because they offer extended shelf life and food safety as they wait out the crisis.
Maya Norris
Jun 18th, 2020
More in Home

The company will mark the platinum occasion with a 12-month-long celebration.
Heat and Control, Inc.
Jun 16th, 2020

Tetra Pak announced its commitment to reach net zero greenhouse gas (GHG) emissions in its own operations by 2030, with the ambition to achieve net zero GHG emissions for the entire value chain by 2050.
Tetra Pak
Jun 17th, 2020

The newest guideline is Wet Salads, also known as deli salads. This addition is one in a continuing series of CPC initiatives to raise the awareness and use of HPP and be the voice within the industry.
Sean Riley
Jun 15th, 2020

Argentinian Coca-Cola bottler Reginald Lee works with same supplier for four bottling lines, the most recent of which handles hot-fill and carbonated drinks with efficiency and a high degree of automation.
Anne Marie Mohan
Jun 12th, 2020

A grant and rebate from the local electricity provider and other energy savings made the cost of the dairy’s sustainability project negligible.
Joyce Fassl
Jun 11th, 2020

FDA and the UN spread the word about ways to reduce the risk of food poisoning.
Joyce Fassl
Jun 8th, 2020

Ground cover at solar installation will include plants that are beneficial to the pollinators of food crops.
Morgan Smith
Jun 5th, 2020