Meatpackers Accelerate Automation after Virus, but Lag Behind Overseas Counterparts

Automation would increase food security and improve plant safety, but is the technology affordable during this turbulent economic era? 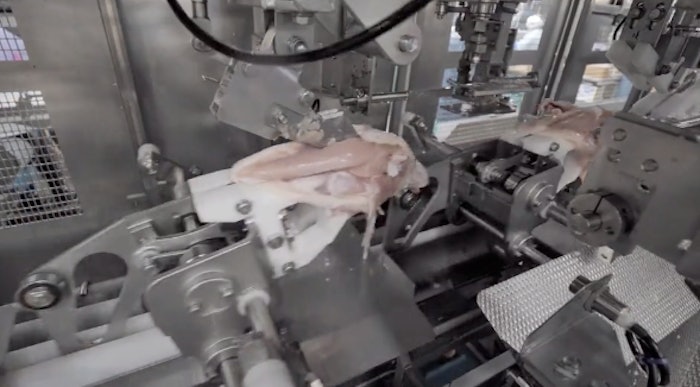 The United States, Canada and Brazil, all major meat producers and exporters, have adopted technology at a slower pace than Northern Europe or Japan and lagged other industrial factories in automating their operations, according to a news report from Reuters. The number of COVID-19 incidents in the meatpacking industry in the Americas may have resulted from very close working conditions.

Accelerating the move to automation would increase food security and improve plant safety, says Reuters, but such plans may be unaffordable during tough economic times. In addition, workers may fear they are being replaced, not protected.

See it Live at PACK EXPO Connects Nov. 9-13: Line Analysis Demo: Learn how to increase your production by identifying inefficiencies and adding accumulation, by Garvey Corporation. Preview the Showroom Here.

According to the report, Cantrell Gainco, which sells Japanese manufacturer Mayekawa’s chicken deboning equipment, has fielded twice the usual number of inquiries since the pandemic spread to North America, said Russ Stroner, vice president of global sales. A Mayekawa statement revealed that global sales of its chicken deboning robot parts are set to rise from $32 million in 2019 to $45 million this year and $60 million in 2021, says Reuters, including North American sales this summer to Tyson, Sanderson Farms and Peco Foods.

More Rules and Realizations in the Era of Smarter Food

There’s one caveat: A qualified and experienced workforce that has remained elusive over the past two decades is one of the greatest challenges in creating your food safety culture.
Joyce Fassl
Apr 14th, 2021

The Technology Balancing Act of Staying in the Zone

Being in the zone means balancing your technology investment with all the people and teams using that technology. The short-term benefits realized through accelerated performance can achieve a lasting impact by sustaining those gains.
Stephen Schlegel
Apr 7th, 2021

The company becomes the first multinational entity focused solely on plant-based meat production to open its own production facility in the country.
Morgan Smith
Apr 6th, 2021

Royal Canin North America, a leader in pet health nutrition, will be building a new factory in Lewisburg, Ohio to meet the growing demand for its premium products.
Joyce Fassl
Mar 30th, 2021

The $250 million investment serves as an example of the company’s commitment to its strategic customers and supporting their growth plans into the future.
Morgan Smith
Mar 25th, 2021

The snack leader anticipates replacing all existing diesel-powered fleet equipment with zero- and near-zero emission technologies at its Modesto plant by the end of this year.
Morgan Smith
Mar 24th, 2021
More in Home

The facility, which will be owned in partnership with Artemis Real Estate Partners, will be designed to serve a broad range of customer requirements.
Morgan Smith
Mar 23rd, 2021

The 2 companies will partner to help environmentally conscious consumers compost at home with biodegradable packaging made from natural ingredients.
Morgan Smith
Mar 20th, 2021

The project will help the company meet increased consumer demand for convenient formats that are ideal for casual and at-home occasions.
Morgan Smith
Mar 19th, 2021

The COVID pandemic has turned virtual factory acceptance tests into an accepted method of testing which is now here to stay.
Mar 18th, 2021

Both smart sensors and software are key to a successful predictive maintenance solution, and finding a business model that benefits end users and OEMs is also key.
Kim Overstreet
Mar 17th, 2021

The investment will enable the facility to expand its capabilities to manufacture the Royal Canin and Eukanuba health and nutrition product lines.
Morgan Smith
Mar 17th, 2021