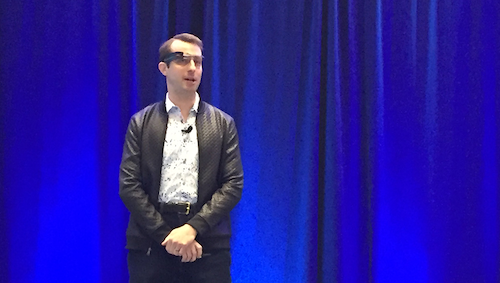 Wearable technologies—Google Glass, HoloLens and more—have been a hot commodity at user group meetings lately or shows like the Offshore Technology Conference (OTC), where automation suppliers are demonstrating the value of overlaying augmented reality or other documentation within the field of view of plant personnel. In fact, hardened wearables and their use by field workers was a featured topic in our latest issue of Automation World.

At the Automation World Conference this week in Chicago, we got a reminder that it’s often best not to reach for all the latest and greatest capabilities just because it’s cool technology. Rather, tackle a small bit of the technology that makes a good case for the business outcomes you’re seeking—start with some basics and get your feet under you before you take off running.

At H.B. Fuller, a global manufacturer of adhesives, field workers are making use of industrial wearables without getting caught up in all the possibilities of the technology. But by using them simply to capture video to stream back to a remote expert, they’ve been able to get significant value-add by reducing troubleshooting time and travel costs.

Jason Sagstetter, senior IT project manager at H.B. Fuller, has been spearheading the project for the company. Donned in Google Glasses himself, he took to the stage to preach the benefits of streaming video through the devices.

It’s fair to classify Sagstetter as a Google Glass evangelist. He marks March 26, 2014 as a day that changed his life; he became a Google Glass Explorer and has been wearing the hardware every day from sunrise to sunset ever since—more than anyone else in the world, he says. “I’ve explored the potential of wearables every day,” he told conference attendees. That potential has included everyday capture of video of his two young daughters (shots he would’ve missed if he’d had to get his phone out of his pocket to take them) on up to helping to save somebody’s life by video streaming the man’s condition to remote responders.

“One of the most powerful aspects of the technology is that I can share experiences from a first-person view,” Sagstetter said. “You’re seeing what I’m seeing.”

His exploration of wearables' potential extends to enterprise as well, specifically manufacturing spaces. H.B. Fuller is leveraging the wearable technology to solve problems in the field—giving technicians immediate access to remote experts who can help get a machine back up and running quickly. It combats a scenario common to troubleshooting today, in which customers might not have the same knowledge or vocabulary to properly describe a problem over the phone. Once an expert flies out to the location, you hope it’s the right person to solve the problem.

With video streaming through Google Glass, “we could bring the problem to the expert,” Sagstetter said. “We could potentially get you operational almost immediately.” The video improves clarity in communication because the expert can see exactly what the customer has been trying to describe.

“This has enabled us to leverage existing FTEs—to have a small group of FTEs to essentially be available for everyone in the world,” Sagstetter said. It provides value by saving travel expenses, but the real value-add is by providing much more immediate customer satisfaction. “Proactivity is where the value-add really comes from. The customer has a problem, we react. We have the ability to show them on their equipment how to use our product.”

Particularly with workers using the glasses in dangerous environments, an audience member questioned whether there was concern about safety while using the wearables. Sagstetter insisted that it was just the opposite—the glasses actually improve safety over the methods that workers had been using.

Safety has always been the No. 1 priority for H.B. Fuller, Sagstetter said. There was actually concern about workers pulling their phones out of their pockets to take pictures or video, despite policies to the contrary. And it is those activities that make them less able to maintain situational awareness—causing them to reach their arms out to unsafe areas, for example, or move closer than they should to get a picture. “Part of the reason smart glasses are so important is because they didn’t do those things,” he said. “They give the ability for them to keep their hands free and keep their body safe.”

One of the most common questions from workers, in fact, is: “Why can’t I just use my phone?” Much of that answer comes down to safety. Not only do workers lose the use of a hand when they have to hold their phone, it also creates what Sagstetter calls the spear paradox. They’re in loud, dark, often dirty environments—and if they’re too focused on capturing something with their device, then they’re not focused on safety, he said. “The safety impact [of the technology] is paramount,” he added. “Everything they’ve been focused on is taking away from them being aware of their surroundings.” Using a phone also requires that they take any hearing protection away in order to get the phone’s audio.

All the examples that Sagstetter showed or talked about during his presentation referenced see-what-I-see applications, sending video to a remote expert. That’s by design, he said. “The way we’ve found success is by keeping it simple,” he said. He wants workers to get used to the technology before taking on a higher level of use.

Just the video alone comes with enough of its own issues. “Video streaming is one of the most difficult things you can do,” Sagstetter said, pointing to potential issues caused by such bandwidth-hungry technology. “You have to make sure the packets get out in real time.” If a worker is pointing at something in a video, and the remote expert on the other end says, “Yes, that’s the right one,” you’d better make sure video lag time doesn’t cause confusion.

Ultimately, though, H.B. Fuller will move on to other phases of wearables use, taking more advantage of the technologies available such as augmented reality or document retrieval. “I want them to be familiar with the technology first so that ideas come from them,” Sagstetter said.

COVID-19 Survey: Nearly half of processors have supply chain disruptions

While pain prevails for some processors, most are optimistic about meeting production demands in the coming months.
Joyce Fassl
Apr 3rd, 2020

How Safe is Reusable Packaging During COVID-19?

Last year, Loop launched its revolutionary shopping platform anchored by reusable packaging. Here, Tom Szaky, founder and CEO of TerraCycle and the driving force behind Loop, provides an update on the platform and how it’s faring in light of COVID-19.
Anne Marie Mohan
Apr 3rd, 2020

General Mills’ Unique Plan to Keep Up with Demand

UnPACKED with PMMI podcast shines a light on the safe use of remote monitoring
Apr 3rd, 2020

COVID-19 Survey: Production Demand Is Up, But Processors Lack PPE

Despite current media coverage, most plant floor workers are not getting hazard pay; many feel frightened.
Joyce Fassl
Apr 2nd, 2020

At the CPA 2020 Annual Meeting, Bruce Bernstein, President of UBIX Processing, talks about the opportunities for CPGs and contract packagers in the growing CBD market.
Anne Marie Mohan
Mar 30th, 2020

The U.S. leads the world in pet food sales, says a new study from PMMI Business Intelligence, as pet owners around the world seek fresher, healthier and ethically produced ingredients—the same as they expect for themselves.
PMMI
Mar 30th, 2020

During World War II, Ford made tanks instead of cars and Maytag made plane parts instead of washing machines. With hand sanitizer being the small-arms munitions of today’s pandemic crisis, cosmetics and distilleries are joining the war effort.
Matt Reynolds
Mar 27th, 2020

Moves into new markets with equipment and software solutions that are complementary to current offerings
Morgan Smith
Mar 26th, 2020

Why Women are Under-Represented in the C-Suite

If companies with more women in leadership roles have greater innovation, increased productivity, higher employee satisfaction, and higher employee retention, why are there so few in the C suite?
Kim Overstreet
Mar 26th, 2020

Fighting Back Against Anti-Plastics Legislation

At the CPA Annual Meeting, FPA President Alison Keane shares how the organization is working to help shape legislation around plastic packaging, rather than just react to it.
Anne Marie Mohan
Mar 26th, 2020

A new study from PMMI Business Intelligence, “Trends and Drivers Impacting The Pet Food Industry,” reveals North America is the top market for pet food, with an annual growth rate of 4.5% in the next five years.
PMMI
Mar 24th, 2020

All Roads Lead to Delay in the Time of COVID-19

Land, sea or air – the supply chain is being hard hit by shortages, delays, rising costs and lack of workers due to the coronavirus.
Kim Overstreet
Mar 24th, 2020

Nominations open for Packaging and Processing Hall of Fame

Now's the time to nominate deserving candidates for the 2020 class of the Packaging & Processing Hall of Fame. Nominations will remain open through June 5, 2020.
Matt Reynolds
Mar 24th, 2020