A new research study, conducted by PMMI, focuses on automation implementation across the processing and packaging industries. It offers insights and strategies for end users and OEMs looking to incorporate greater levels of automation technologies to stay competitive. 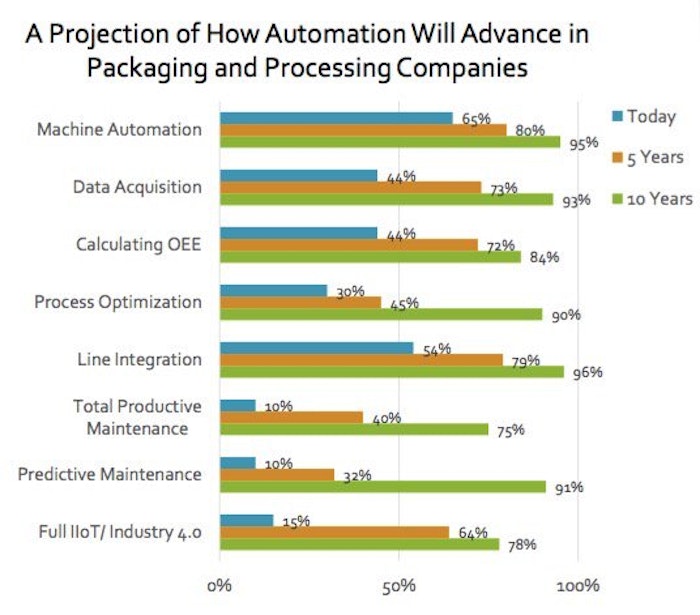 According to a new report from PMMI, “The Evolution of Automation 2017” for the processing and packaging, food, beverage, pharmaceutical and personal care industries, there are six key trends driving greater plant floor automation use across these industries. (Editor’s note: PMMI Media Group, publisher of Automation World, is owned by PMMI, The Association for Packaging and Processing Technologies.) Those trends are:

One chart in the report, “A Projection of How Automation Will Advance in Processing and Packaging Companies,” (shown above) indicates that all aspects of machine and software automation will increase significantly over the next decade. This prediction is based on the collective average response of survey participants, with larger companies automating and integrating faster; small to medium-sized enterprises (SMEs) are also investing more, but at a slower rate.

The report notes that SMEs are embracing automation not just to optimize production processes, but also to survive in an increasingly faster-paced market driven by supply chain partner and consumer demands. Though one of the drawbacks to greater automation use for SMEs is the cost of the technology, the report highlights three key benefits that can help offset a significant portion of those costs:

Breaking out respondents’ comments to assess spending trends across the vertical industries covered in the study, the PMMI report shows:

The full report from PMMI will be released following PACK EXPO 2017 at www.pmmi.org/research. Highlights from report will also be showcased during the PACK EXPO event in Las Vegas, September 25-27.