The certification supports the company’s commitment to animal welfare.

Tyson Foods, Inc. has received Poultry Handling and Transportation (PHT) certification, recognizing the proper handling and transport of birds in its chicken business. Tyson is the first major chicken producer to be awarded the certification, which was created as part of a program developed by Penn State University scientists, the USDA and industry specialists, and is managed by USPOULTRY. PHT focuses on areas such as biosecurity, disease recognition, emergency planning and the safe and humane handling of birds before, during and after transport. In addition, more than 1,000 Tyson Foods poultry and transportation workers have received individual PHT certification over the past year. 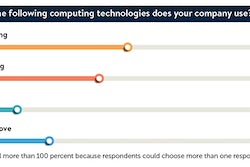 It’s not edge vs. cloud—it’s both