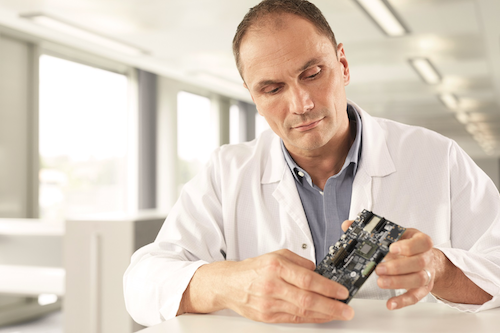 While uncertainty still looms over the political and economic environment, Leuze is demonstrating creativity through the use of “alternating quarantines.” As a result, the company’s numbers are on track despite the pandemic and short-term work is not an issue.

Leuze has demonstrated that it is inventive and innovative when developing new products, technologies and solutions—evidenced by more than 200 patents registered in the past 10 years. The supplier is demonstrating similar creativity and innovative strength during the COVID-19 pandemic, acting early and taking a proactive approach to defy recession forecasts.

The term “alternating quarantine,” coined by Israeli virologist Dr. Baruch Barzel, simply means working alternately with a rotating shift model. Leuze adopted this concept for its own use in mid-February and successfully implemented it first at its Asian locations, then systematically at all of its locations around the world. Divided into sub-teams, employees in both production and logistics as well as the Sensor People in the technical or commercial areas work without encountering one another personally.

“Thanks to the discipline required of the employees and the corresponding technical equipment, it is functioning very well,” says Leuze CEO Ulrich Balbach. “The situation is being regularly examined and adapted. Country-specific situations, lockdowns, as well as government directives will, of course, be taken into account and observed.”

In this context, employees in, for example, China, India, or even in foreign countries within Europe, worked for a time only from their home office. Business trips were put on hold already at the start of the year as was participation at trade fairs. Staff and customer meetings took place only online during this time. Alternatively, customers were offered virtual trade fairs and webinars to stay abreast of new Leuze technologies and products.

“The new online formats were very well received by our customers—a concept that we are sure to make further use of in the future in addition to our live activities,” says Salvatore Buccheri, managing director of the sales company in Germany. The first lockdown relaxations are now occurring in Asia and Germany: effective immediately, customers can again be visited in person provided the required protective measures and hygienic regulations are adhered to.

The past business year was once again a record year for Leuze. Contrary to the generally negative economic forecast, this is a very positive result for the company, which continues to expand. 2019 concluded with growth in the mid-single-digit range. “We are, of course, also currently feeling the effects of the corona crisis,” Balbach says. “But fortunately, these do not occur at the same time and to the same degree at our locations around the world. These are the advantages of an internationally active global player.”

The family-run business produced at full capacity and briefly filled the warehouses in order to continue to make deliveries. The calculation paid off: Customers and suppliers received their orders worldwide, nearly all of them without delay. “This is especially important in, for example, laboratory automation or intralogistics, where we make our contribution to sustain system-relevant delivery chains,” Balbach adds.

The positive numbers are allowing Leuze to make all investments in global structures as planned. The construction of the new Leuze distribution center in Unterlenningen near the company headquarters is also advancing with great strides. Its completion and commissioning are planned for July. “Unlike many other companies, including many within our industry, we currently see no reason to consider Kurzarbeit [short-term working schemes],” says Hannes Horlacher, director of human resources global at Leuze. “On the contrary: Skilled and qualified employees are always wanted and needed, especially as Leuze has ambitious goals.” This also applies to the commercial and technical apprenticeship professions and dual degree programs for which the application phase is just getting underway for the 2021 start of training.

The Drive to Zero Downtime

Pierre Lilly will be responsible for overseeing compliance with the laws and regulations that govern the company’s worldwide operations.
Morgan Smith
Oct 20th, 2020

Healthier eating lifestyles and habits were already on the rise before the pandemic, but now there is an updated perspective on modern health.
Kim Overstreet
Oct 19th, 2020

Smithfield Foods to Have New President and CEO

As consumers shift consumption habits amidst the pandemic, many manufacturers in ProFood World’s Global 250 Food and Beverage Manufacturers list take this moment as a window of opportunity to boost growth of their iconic legacy brands and retail channel.
Maya Norris
Oct 15th, 2020

Current CEO Annie Young-Scrivner is set to leave the company at the end of November to pursue another opportunity.
Morgan Smith
Oct 14th, 2020

The move will strengthen Schenck’s European capabilities in the food processing and equipment sector, and broaden its product offerings in the Americas.
Morgan Smith
Oct 14th, 2020

Babyblends maker Little Spoon has expanded its product offerings to include supplements/vitamins and a line of plated meals for the younger set in just a few short years, while also selling solely direct-to-consumer.
Kim Overstreet
Oct 13th, 2020

The facility sits in a location that provides access to a skilled workforce, favorable business climate, railroad transportation, and a launch pad for global export.
Morgan Smith
Oct 12th, 2020

Get More From Your Existing Assets

Identifying why your equipment is running below its potential is the first step in boosting output. Visibility tools, remote diagnostics, and the care and feeding of your essential human assets can push throughput in the right direction.
Joyce Fassl
Oct 9th, 2020

After asking consumers what they wanted and needed from the deli category, this Smithfield brand learned that packaging needed to better demonstrate consumer benefits, like ideas for home-cooked meals.
Matt Reynolds
Oct 7th, 2020
More in Home

If CPGs are ever going to capitalize fully on the potential benefits offered by remote access technology, they need to start small and grow success rather than looking to quickly implement an entire complex plan all at once.
Pat Reynolds
Oct 5th, 2020

Meatpackers Accelerate Automation after Virus, but Lag Behind Overseas Counterparts

Automation would increase food security and improve plant safety, but is the technology affordable during this turbulent economic era?
Joyce Fassl
Oct 2nd, 2020

The project will enable the company to expand its harvest and fabrication facility to further solidify its position as the Southeastern U.S. beef processing leader.
Morgan Smith
Oct 2nd, 2020

PMMI, The Association for Packaging and Processing Technologies announces the Class of 2020 Inductees.
PMMI
Oct 1st, 2020

Walmart Goes ‘Beyond Sustainability,’ Vowing to Become a Regenerative Company