The Need for Speed: Brewery Boosts Throughput with Centrifuge Technology

Rhinegeist upgrades to a vertical disk stack centrifuge that speeds up its brewing process while enhancing product quality and consistency. 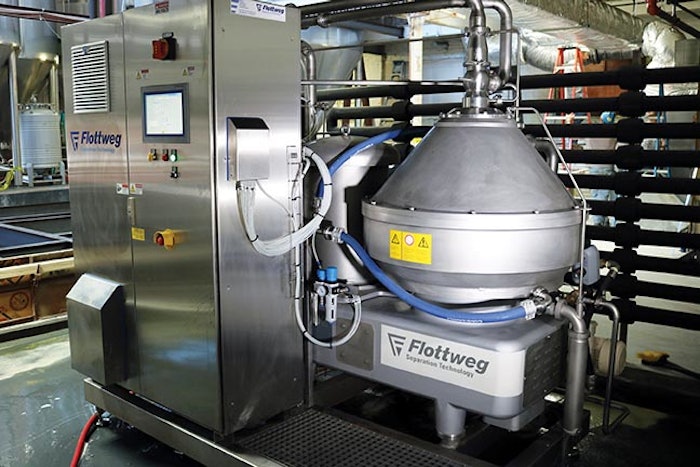 Since using the Flottweg AC 2000 centrifuge, Rhinegeist has been able to shave at least a week off of its brewing process, producing 3,400 barrels of beer a week.
Photo courtesy of Flottweg.

Rhinegeist knows all too well that patience is often required when brewing high-quality craft beers, a process that can take anywhere from two to four weeks. But the Cincinnati-based craft brewery can throw some of that patience to the side, now that it has been able to shave at least a week off of its brewing process after investing in a vertical disk stack centrifuge system to filter its beers. The new centrifuge has helped the company boost throughput while improving the consistency and quality of its beers to meet increasing production demands.

Rhinegeist has experienced exponential growth since it opened in June 2013. The craft brewery initially produced 11,500 barrels of beer that year and four types of beers. Today, Rhinegeist makes more than 100,000 barrels of beer and about 150 types of beers. They include seven beers available year-round, including Rhinegeist’s popular Truth IPA and Uncle British mild ale; seasonal offerings, such as its Kalmer Kölsch and Calfé coffee milk stout; and limited editions, like the Alpha Squid hazy imperial IPA and Bogbeast, a wheat wine ale aged in Scotch barrels. The company distributes its beers to grocery stores and restaurants in Ohio, Kentucky, Massachusetts, Indiana and Tennessee.

That growing demand prompted Rhinegeist to install the AC 2000 centrifuge from Flottweg to bring speed and efficiency to its filtration process. After primary fermentation is complete, the beer is pumped to the centrifuge to separate the yeast, hops, proteins, and other particulates from the liquid. Once the mixture reaches the bowl of the centrifuge, the distributor gently accelerates the bowl to full speed. The product enters the disk pack, spreading out into many thin layers. The centrifugal force expels the solids to the edge of the bowl. The collected solids then run off through a separate outlet. Meanwhile, the clarified liquid flows from the disk stack to a peeling disk, where it is discharged from the centrifuge via a centripetal pump under pressure to a Brite beer tank for carbonation and packaging.

Rhinegeist credits the Flottweg centrifuge for tightening up its production schedule by at least a week. Prior to using the centrifuge, the company would have to wait several days before separating the liquid from the solids. After primary fermentation, the beer was cooled to about 30°F. The drop in temperature caused the yeasts and other solids to settle to the bottom of the tank over several days. Once the solids reached the bottom of the tank, the clarified beer was pumped to a Brite tank. However, with the new centrifuge, Rhinegeist can separate the liquid from the solids immediately after primary fermentation.

“We don’t have to wait for [the particulates] to settle all the way out of the beer. We can spin all the beer through the centrifuge, and that centrifuge will collect all that yeast and any other proteins and haze … mechanically instead of waiting for time and gravity,” says Cole Hackbarth, director of brewery operations at Rhinegeist. “It saves us about seven days of tank residence time.

“Take for instance, Truth, which is our flagship IPA, about 50% of our production. Without the separator, that would usually sit for up to 18 to 20 days. That’s from brewing all the way through fermentation to finished package,” he adds. “We can now move Truth in 11 or 12 days.”

The centrifuge also helps Rhinegeist enhance the consistency of its beers. According to Hackbarth, the traditional racking method the brewery used to separate the solids from the liquid just did not have the precision of the Flottweg centrifuge. The centrifuge’s programmable logic controller lets operators access stored recipes and adjust the speed and turbidity of the centrifuge accordingly to control the clarity, brightness, and haze for each beer.

“[Previously,] as we were pulling the liquid off the solids—as the liquid level got closer to the solids on the bottom [of the tank]—we would start to pull some of those solids with clear beer,” he explains. “So we’d have an inconsistent level of haze, and sometimes we’d have some particulates in the Brite tanks that could make it into the package. So sometimes you have a nice bright, clear beer in the can, but then sometimes you could get a can that’s a little hazy or has some little bits of yeast in it. So the centrifuge really just gives us a more consistent level of clarity in our beer.”

In addition, Hackbarth appreciates that the centrifuge helps minimize product loss as well: “We are processing as much of the liquid as possible,” he says. “Whereas without [the centrifuge], you’re intentionally leaving some liquid behind to try to minimize the cloudiness and haziness that can come with it.”

“We do have an open facility, so reducing the production noise reduces noise in the tap room. But it’s also a safety thing for our employees,” Hackbarth says. “When they’re working around a lot of loud equipment, if the decibels per hour get over a certain level, they need to start wearing ear protection, and we need to start doing baseline hearing tests and lots of other things. For our equipment to be under 80 decibels is the standard that’s really important, and any chance we can reduce operating noise is really beneficial to our production workers and operators.”

Now that the Flottweg centrifuge has proven its worth, Rhinegeist plans to install a decanter from Flottweg in April. The brewery will use the decanter to quickly and efficiently remove the hops pellets used during the dry hopping process when making IPAs.

“Centrifuges usually only capture smaller particles, yeast and proteins. They don’t handle really big chunks like dry hops material very well. So a decanter is a bigger style of separator. It’s designed specifically to handle these really large particles that in the brewing world come from dry hopping and adding a ton of hops to make IPAs and things like that,” Hackbarth says. “The plan is to use it for IPA, and then we’re going to trial it with some of our other beers as well to see if there’s a benefit. We know we can probably get at least a 10% yield increase with the decanter on each batch, which adds up pretty quick.”