The global pet food market reached nearly $97 billion in 2020 and is projected to register a CAGR of 4.8% through 2026, according to Reportlinker.com. But perhaps more important than the pure numbers is the idea of growing pet humanization—a shift from pet ownership to parenting, a growing bond that brings with it a willingness to spend more on pets. 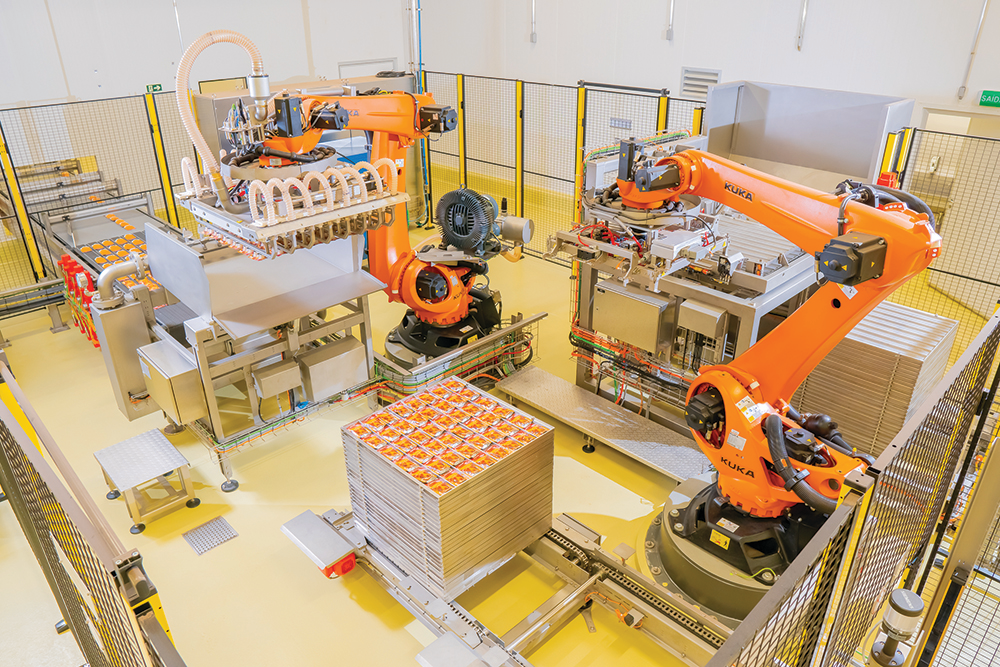 In 2019, Special Dog Company inaugurated an ultra-modern pet food factory with automated processing and packaging.Photo courtesy of EngilicoTop-quality, nutritional, flavorful pet food is more important in this market than ever. Special Dog Company, established in Brazil two decades ago, deployed a state-of-the-art production facility in Santa Cruz do Rio Pardo in 2019 to increase its product portfolio and keep up with the growing market. When it did so, an important requirement set forth by the company was to move to 100% inline seal inspection to safeguard the packages and the wet pet food inside.

In 2020, the pet food maker produced more than 22 million packages, or more than 2.2 million kg of wet pet food, according to Production Manager Octávio Soberón. The food is packaged in retort packages, including flexible pouches and aluminum trays. Sealing of those filled packages is the culmination of a complex process and is essential to protect the food’s quality once it leaves the plant. Incompletely sealed packages, and packages with product spillover outside of the seal, both negatively impact the packaging processes. Exposed product results in contaminated machines, as well production and labor time lost to cleaning, manual sorting of bad packages, etc. If the poorly sealed packages leave the production site, the impact could be even greater, with potential risk for expensive product returns, call backs and brand damage. 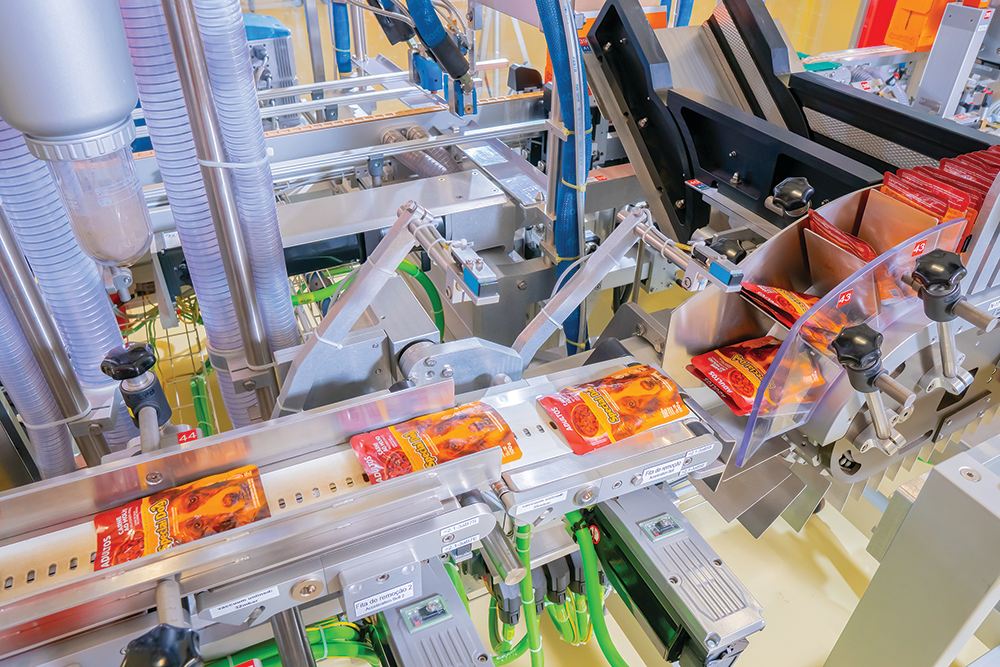 Thanks to a 100% inline seal inspection process, leak-free packages ensure product quality and leave no unwanted residue on machinery.Photo courtesy of EngilicoThese were all key factors in choosing a 100% inline seal inspection system. “The sealing of flexible packages is a critical phase in the packaging process,” Soberón says. “Even with a top-quality packaging machine, bad sealings could occur from time to time.” Defective seals are often caused by wrinkles, folds, or product in the sealing area and lead to open or leaking packages.

Wet pet food is especially prone to sealing concerns. Because many glutinous sauces or gels are used in the recipes, it can easily stick in or around the package’s sealing area during the filling process.

Badly sealed pouches are a major concern during the sterilization process because, when the pet food is heated, it might leak and pollute the autoclave. The disruption to production and man-hours for autoclave cleaning has a domino effect in cost. Worse, if compromised packages are not detected, they can lead to reduced shelf life, liability for health risks, and broad recalls.

“Packaging is also responsible for making sure the product gets from the factory, through transport and distribution, and on to retail and the home without any loss to the integrity of the product,” Soberón says. “At the latter end, it may also be responsible for providing barriers to oxidation and moisture migration, which can affect palatability and the nutritional composition of the product.”

For the packaging of the retort pouches, Special Dog Company has installed a multi-head weigher, followed by a high-speed rotary filling machine from Toyo Jidoki. To inspect the sealing of the retort pouches, Special Dog Company extensively researched the market and ultimately opted for the SealScope inline seal inspection system from Engilico. “The SealScope is installed in the sealing bars of the filling machine,” Soberón says, explaining that the filling machine is also followed by an X-ray inspection system to detect metal contaminants.

SealScope’s approach to inline seal inspection is unique. Vibration sensors are retrofitted on the sealing jaws of the dual-lane rotating packaging machine at two stations in the carousel. The sensors measure the vibration response during the closing of the sealing jaws and compare that to a reference model of correctly sealed packages. Product getting into the seal, or wrinkles or folds in the seal, can create a change in the vibration. The package is rejected when the deviation is higher than a user-defined limit. 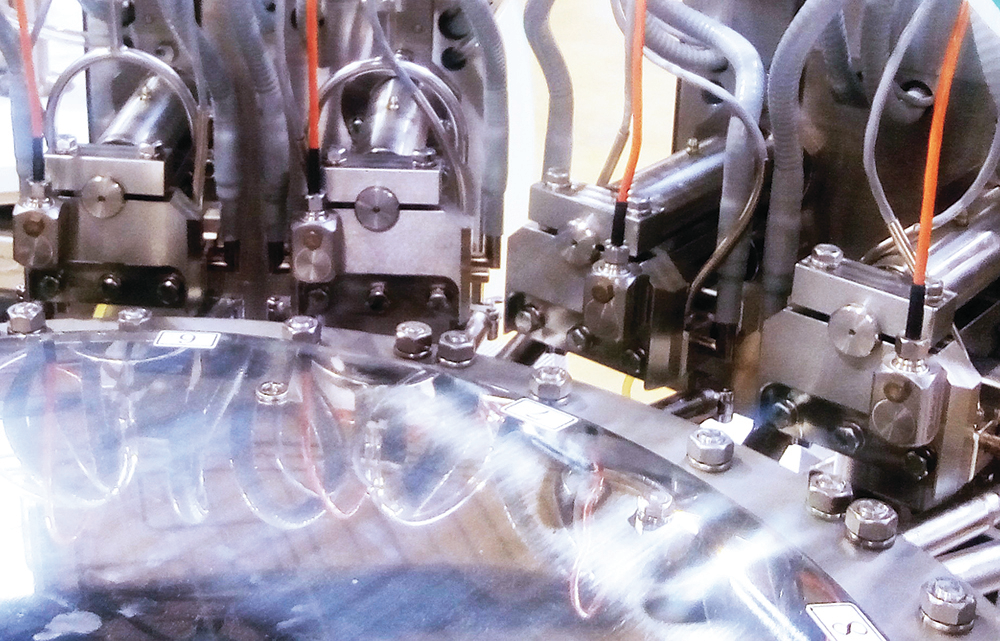 The sealing bars of the rotary packaging machine are equipped with SealScope sensors that detect product in seals, wrinkles and folds that cause leaking packages.Photo courtesy of Engilico“The devices measure and record the impact in each sealing bar, resulting in a standard curve. If any debris or turned Teflon tape occurs, the impact will be affected, and the curve will be different,” Soberón explains. “Thus, the software compares the curves and, respecting the tolerances, accepts or rejects the pouch.”

This automated, 100% inspection leads to immediate benefits. Every single package is inspected, so manual inspection can be considerably reduced. It is still a good manufacturing practice (GMP) to double-check the sealing manually, Soberón says, but “with the SealScope inline, the number of pouches inspected manually is much lower than a line without this device.” Random physical sampling includes destructive burst testing along with other human inspections, taking 5 to 6 minutes per package.

By rejecting the defective packages, the outgoing quality is immediately improved. “The non-destructive seal testing made directly on the sealing bars greatly improved our line efficiency from previous manual inspection methods,” Soberón says. Since installing SealScope, the pet food company has not received a single complaint regarding sealing issues, he adds.

Because SealScope inspects every product, it also serves as a continuous monitoring system—not only for the sealing process but indirectly for the complete packaging line. Any variance detected in the sealing process indicates systematic errors in the packaging process. User-defined warnings prompt the operator to take preventive corrective actions—cleaning the sealing station, replacing the Teflon protection foils, etc.—to avoid further process drift and keep the machine in optimal shape.

With the ever-increasing demand for high-quality wet pet food, Special Dog Company plans to further extend its production capacity, according to Soberón, who says the factory was built with expansion in mind. “The bottleneck is the filling machine, which is running at 120 ppm,” he says. “The plans for the near future are to install another filling machine, which is going to double the current capacity.”

With the new filling machine also will come a second SealScope. “For the installation of the new line, Engilico’s SealScope system is going to be there, for sure,” Soberón says.

PACK EXPO Las Vegas and Healthcare Packaging EXPO (Sept. 27-29, Las Vegas Convention Center) will reunite the packaging and processing community. With more than 1,400 exhibitors, no other event in 2021 will bring together a more comprehensive gathering of suppliers offering new products, technologies and solutions. Attendee registration is now open.

Optimize Your Space Use

Do you have an existing food facility or planning a new project? Make the most of space design with this ProFood World e-book.
Jul 14th, 2021

Demand is rising for improved precision in food inspection. Food producers are taking advantage of the data and processing capabilities in their systems to not only improve food safety, but also to work toward improved traceability.
Aaron Hand
Oct 28th, 2020

Mettler Toledo offers the C35 checkweigher designed for harsh environments. It supports speeds up to 250 packs/min and a weighing range from 25 g to 7 kg.
METTLER TOLEDO Product Inspection
Aug 19th, 2020

A wide scanning range detects all types of products, even those with difficult geometries
Leuze electronic, Inc.
Jul 3rd, 2020

A five-year agreement takes Antares beyond pharmaceutical packaging, making it the exclusive supplier of all inspection and tracking technologies for IMA Group, including food and bev, cosmetics, and medical devices.
Jun 26th, 2020