A new technology could reduce emissions, increase the use of biogas and improve protein self-sufficiency. 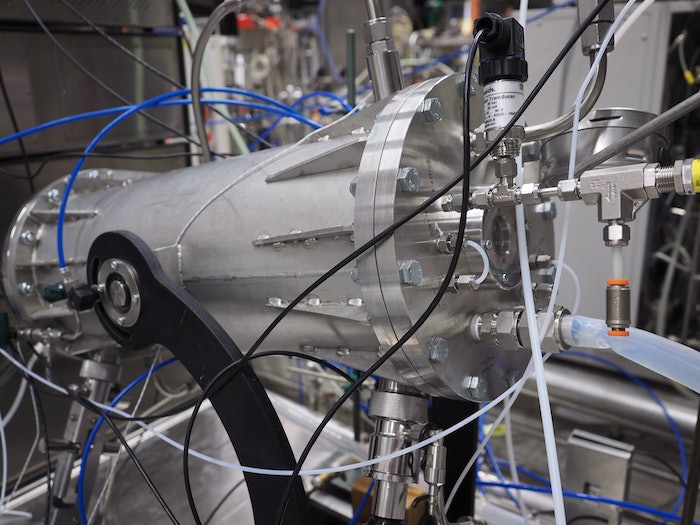 The methane gas generated by anaerobic digestion on farms, landfills and wastewater treatment plants is fed into a gas fermentor. The cell mass is then filtered, pasteurized and dried. Photo courtesy of VTT Technical Research Centre of Finland.

Late last year, VTT Technical Research Centre of Finland developed a solution for converting small sources of methane-rich biogas into raw materials for animal feed or bioplastic on farms, landfills and wastewater treatment plants. This emission-reducing solution is based on the ability of methanotrophic bacteria to grow on methane in gas fermentors.

However, the processing of such gas into biomethane has only been viable on large biogas-producing sites, until now. This method could reduce emissions, increase the use of biogas and improve protein self-sufficiency.

“If and when natural gas prices go up again, the operational costs of using it as a raw material for animal feed or bioplastics, of course, increases,” says Juha-Pekka Pitkänen, principal scientist of bioprocess engineering, industrial biotechnology and food solutions. “Legislation can be both encouraging and penalizing; encouraging in the form of subsidies now given in some countries for biogas production. In principle, it could also be possible to penalize for methane emitting, but that could be a blow to many farmers.”

The methane gas generated by anaerobic digestion on farms, landfills and wastewater treatment plants is fed into a gas fermentor.

“A growth medium containing the methanotrophic bacteria circulates through the pipes of the gas fermentor, creating a single-cell protein biomass with a protein content of around 60%. The cell mass is filtered, pasteurized and dried,” says Pitkänen.

The conversion process is based on the ability of methanotrophic bacteria to grow in aerobic conditions in gas fermentors, using methane as the source for carbon and energy.

“The process is independent of the solid raw material, as long as the raw material can be digested to biogas,” says Pitkänen. “Many food companies and wastewater treatment plants digest their residual biomass-containing waste streams to biogas, which is then used as a fuel either for heat and power generation directly on site or upgraded by purifying it, so that the resulting biomethane can be injected into the existing natural gas grid. Depending on the scale of biogas production facility, it could be useful to consider making these more valuable products. The approach is mainly to encourage utilization of small biogas sources, which currently are not yet utilized, rather than encouraging existing large biogas facilities switching to using biogas as a raw material for new products.”

Based on previous studies, single-cell proteins produced using microorganisms can be substituted for ingredients such as meat, soya, egg whites or fish in food and feed. And, in Europe and Finland, attempts are being made to meet the challenge of protein feed for domesticated animals by improving protein self-sufficiency, thus promoting vegetable protein production.

“The idea of growing organisms on methane or natural gas is not new,” says Pitkänen. “The earliest cultivations of methanotrophic bacteria are from 1958. Norwegian company Norferm produced 8,000 ton a year fishmeal from natural gas, but increase in fossil fuel prices stopped the production. Interest on gas fermentation technologies is substantial at the moment, and there are start-up companies on the topic, especially in the U.S. due to shale gas.”

For instance, in 2014, Calysta of Menlo Park, Calif., purchased BioProtein A/S, Norway, and its bioprotein technology to produce lactic acid as a raw material for bio-based and biodegradable plastics.

Similarly, in March 2016, Intrexon Corp. of Germantown, Md., opened a pilot plant for its proprietary gas-to-liquids bioconversion platform, which enables production of desired chemicals from methane.

And, Mango Materials, based in Berkeley, Calif., is applying the natural ability of methanotrophic bacteria to accumulate PHB for production of PHB-based bioplastics. This cradle-to-cradle cycle entails some microbes to produce polymer from methane, and some to produce methane from used and discarded products made from PHB.

“The factors influencing the methane gas fermentation technology are the price of fossil fuels, legislation on methane emissions, development of high-value applications for PHB or other components of the microbial biomass and technological breakthroughs,” says Pitkänen. “PHB can be used as a raw material for biodegradable packaging material instead of oil-based and non-biodegradable plastics such as polypropylene. The cell mass may contain 50% PHB, in which case the protein content is around 30%. Extraction is used to separate the PHB and protein fractions from the dried cell mass. One of the main technological challenges in gas fermentation is the poor solubility of gases to water, and thus energy is required to enable good mixing and efficient gas-to-liquid mass transfer. So far, there seems to be no magic trick for this.”

Can be used for the clean depositing of relatively viscous-to-liquid products
Unifiller Systems Inc.
Sep 26th, 2021
More in Process Equipment

Cuber Increases Capacity and Ease of Use