When a Smithfield Foods Ideation Project challenged facilities to reduce the use of single-pass water for reuse elsewhere, the company’s Sioux Falls, S.D. facility answered the call. 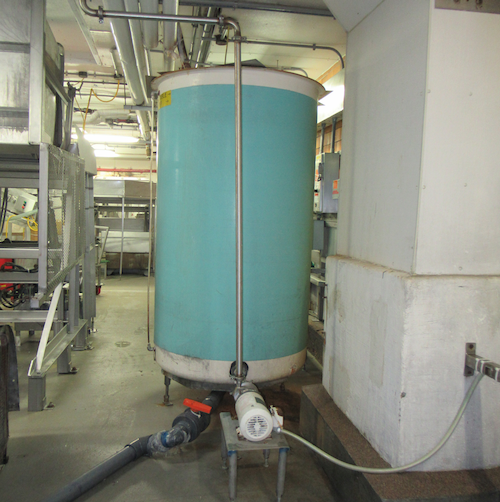 Installation of a new tank system and pumps have paid dividends and saves more than $30,000 per year at Smithfield Foods' Sioux Falls, S.D. facility. Photo courtesy of Smithfield.

In 2018, Smithfield’s hog processing facility in Sioux Falls, S.D. was using close to 100 million gal of water per year. But today, a small investment in a new tank system and pumps has paid dividends for the facility. The new equipment includes a round 300-gal storage-to-tank system that receives cold water that is then pumped by a Fristam FPX-702 pump with a Baldor 5 HP 3,600 rpm motor. It feeds a Travaini TRH Liquid Ring vacuum pump driven by a 15 HP 1800 rpm motor, and then recirculates back to the tank, allowing the facility to reuse the water.

Completed in just three months in 2019, this project reduces the need for city water used in the processing facility by about 5.15 million gal per year, allowing the city to instead use this water for approximately 145 residents annually.

“The ROI on this project was less than one month,” states Charles Schulz, environmental coordinator for Smithfield Foods. “The cost of both purchasing city water and then treating the clean water in our wastewater system is $0.0062 per gal. The project cost was $6,000, and the water saving cost is $31,917.60 annually.”

This project came about from a Smithfield Ideation Project to find areas in all facilities that can reduce the use of single-pass water for reuse elsewhere. “We have a total of five vacuum pumps that will be switched over to this process, which greatly reduced the water use in a single-pass system,” Schulz adds.

After some investigation, the facility saw that the amount of clean city water going to the wastewater treatment plant could be reduced. Schulz says the only challenge was finding a spot for the water-recycle tank and then plumbing the tank to the vacuum pump. At the end of the day, a small investment in equipment and labor resulted in monetary as well as environmental savings.

For this project, Smithfield Foods received a third-place honor for its Sioux Falls, S.D. facility in the Program Category of ProFood World’s annual Sustainability Excellence in Manufacturing Awards. The awards ceremony will be held at PACK EXPO International in November 2020.

The company has contracted with national energy advisory firm 5 and ENGIE Resources, LLC on a five-year energy agreement that supports the development of renewables.
Mclean Packaging
Jul 10th, 2020

The Coronavirus pandemic is creating a growing waste crisis even as we see images of the earth’s environment clearing from less pollution. A few months into the crisis, and the numbers are staggering.
Kim Overstreet
Jun 29th, 2020

Tetra Pak announced its commitment to reach net zero greenhouse gas (GHG) emissions in its own operations by 2030, with the ambition to achieve net zero GHG emissions for the entire value chain by 2050.
Tetra Pak Inc.
Jun 17th, 2020

New Recycling Process Uses Enzymes to Break Down Plastics by 70%

The Enzplast2 project from Spain’s AIMPLAS focuses on the use of enzymes in the plastics sector to develop more sustainable processes, including separating multilayer packaging and improving biodegradation.
Jun 5th, 2020

Ground cover at solar installation will include plants that are beneficial to the pollinators of food crops.
Morgan Smith
Jun 5th, 2020

Reusable Packaging State of the Industry 2020

Loop products in returnable packaging are scheduled for launch nationwide this month, while retail partners in the U.S., France, and Japan plan to offer Loop in their stores later this year.
Anne Marie Mohan
Jun 3rd, 2020

Company is working toward meaningful, sustainable impact on land use, climate, and water.
Morgan Smith
Jun 1st, 2020
More in Sustainability

Sixty CPGs were interviewed for a new sustainability report by PMMI Business Intelligence. They had much to say about machines, materials, new formats and sustainable initiatives, as well as what they need from suppliers.
Kim Overstreet
Jun 1st, 2020

The company is in the development stages of food- and pharma-grade tube systems that align with existing recycling processes.
Hoffmann Neopac AG
May 18th, 2020

Machine Efficiency and the Impacts of Sustainable Packaging

Eliminating unnecessary plastic, sustainable innovation, and circulating plastic within the economy are the three goals of more than 450 global partner companies seeking to keep plastic waste out of the environment.
Kim Overstreet
May 11th, 2020

Sustainable Package Reformatting on the Rise

According to a new report by PMMI Business Intelligence, over half of CPGs are changing product packaging to meet sustainability goals by moving from one format to another.
Kim Overstreet
May 8th, 2020

Following a major corporate rebranding, the food and pharma packaging OEM launches its first virtual show as a platform to introduce new products and interact with customers.
Stephanie Neil
May 7th, 2020

The coronavirus raises concerns about reusable packaging and deals a blow to recycling, but amidst the uncertainty, CPGs and associations still work toward greater packaging sustainability.
Anne Marie Mohan
May 4th, 2020