Adding automated equipment, process control, and analytics to its operations has enabled Edesia Nutrition to almost triple the output of its ready-to-use therapeutic foods, helping to reach the most vulnerable populations around the world. 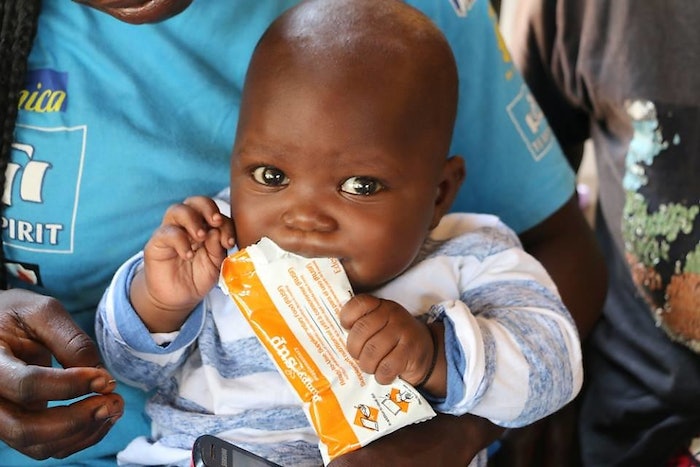 Just one box of Plumpy’Nut—containing 150 packets of a peanut-based high-energy therapeutic food that treats severe malnutrition—is enough to bring a child from the brink of death to healthy development.
Edesia Nutrition

For a company that is trying desperately to eradicate poor nutrition around the world, automation and analytical insights have meant reaching even more young children in some of the direst situations around the world. “We’re serving the most vulnerable populations, which generally means young children, in the most troubled places in the world. Nutrition relates to about 45 percent of young children’s death. The consequence is dire for the youngest children in particular. It weakens the immune system, it weakens growth,” said Maria Kasparian, executive director of Edesia Nutrition. “There are also economic consequences. When communities are malnourished, it slows the economy.”

Edesia Nutrition is a non-profit manufacturer of ready-to-use therapeutic foods (RUTFs). Just one box of Plumpy’Nut—containing 150 packets of a peanut-based high-energy therapeutic food that treats severe malnutrition—is enough to bring a child from the brink of death to healthy development.

“Poor nutrition is the single most important threat to the world’s health,” Kasparian said. So it’s probably understandable that she also said, “We measure everything in how many children we can reach.”

Speaking at Perspectives, presentations for members of the industry press leading up to Rockwell Automation’s latest Automation Fair, Kasparian was explaining the very straightforward motivation for Edesia to automate its operations to increase the number of packets and boxes it’s able to produce. “We’ve been able to use automation to multiply our impact across the world,” she said.

Starting as a small, manual factory in Rhode Island in 2010, Edesia has since grown to a state-of-the-art automated space of 85,000 sq ft, increasing its capacity from 9,000 to 25,000 metric tons. The company went through “huge upgrades” in 2016, Kasparian said, scaling up and also automating, working with system integrator Hallam-ICS to incorporate Rockwell’s PlantPAx distributed control system (DCS) for batch process control.

Edesia’s staff of 105 has also been able to grow their skillsets with the automated operations. Coming from about 25 different countries of origin, Kasparian said, about one-quarter of the staff members are former refugees themselves. “Changing from manual labor to an automated smart factory resulted in workers learning new skills and embracing new technologies,” she said. It was not without effort, however, requiring about six months of just training. “But today, they have higher-skilled jobs, better paying jobs, more satisfying jobs.”

Employee decision-making has also been improved with the more recent addition of real-time process control system (PCS) metrics for immediate analysis and action, Kasparian said. “Hourly data pushes directly from the process,” she explained. “All staff who need to know are able to easily access it. They’re able to recognize how we’re doing and where we might need to take action.”

The process metrics have allowed employees to make better decisions, Kasparian added, which in turn leads to improved efficiencies. “We’ve had about a 20% increase in our capacity just this year alone,” she said.

In 2019, Edesia surpassed 10 million children—in more than 50 countries—that it’s been able to reach with its products. “Innovations have helped us lower the cost of humanitarian efforts,” Kasparian commented. “That means reaching more children.”

Automating Your Plant Is a Marathon, Not a Sprint

An automation roadmap identifies the key steps that help define the process of developing your automation strategy and includes a formal decision-making process on how to proceed properly.
Stephen Schlegel
May 31st, 2022

Automation Doesn’t Have to Require a Complete Overhaul

Small changes can make big improvements to the efficiency of your operations.
Aaron Hand
Apr 25th, 2022

Digital Transformation of the Industrial Workforce

SafetyChain’s plant management platform is a personalizable suite of software delivered as a service that addresses data capture and visualization as well as worker task direction from receiving and processing to regulatory compliance.
David Greenfield
Mar 24th, 2022

The Ultimate Feeder from Hoosier Feeder Co. incorporates a hygienic design for the food industry, increasing the automation of the singulation and orientation of bulk product such as bread or meat patties to ready them for packaging.
Aaron Hand
Mar 22nd, 2022

Small and medium-sized manufacturing operations are now the companies that hackers and bad actors target the most
Sean Riley
Mar 18th, 2022