NGO actions may have real consequences

It might be basic physics: Push in on one side, and something sticks out on the other.

If the Trump administration’s stated philosophy is to oppose regulatory activity of essentially all kinds — and it is — then state governments and nongovernmental organizations who don’t share that philosophy can be expected to dial up their activity levels.

And when it comes to NGOs, packaging materials are among their targets: Several groups filed an objection to U.S. Food and Drug Administration’s allowance of perchlorate in dry food packaging, and the battles over the FDA’s Generally Recognized As Safe program have moved into court. While these actions have their roots in the pre-Trump era, it’s not a stretch to predict that such activism by those with a different philosophy will grow and expand.

FDA says, “perchlorate may only be used up to a certain level as a component of antistatic agents used in food packaging for certain dry foods.” FDA’s website has an info page on perchlorate saying that FDA studies show perchlorate residues in food don’t appear to have gotten higher in the past decade or so. FDA says it’s still studying the chemical.

FDA also says this about perchlorate in drinking water: “If you live in one of the few areas where perchlorate in the public drinking water is at levels above 15 parts per billion, the FDA recommends using water that is lower in perchlorate levels, such as bottled water or water from a home treatment device certified for perchlorate removal, to reconstitute your infant’s formula.”

Back in 2005, FDA OK'd an exemption under its Threshold of Regulation rule for a use of sodium perchlorate monohydrate in antistatic agents in dry food packaging. Then, in May of this year, FDA denied a food additive petition filed by a group of organizations seeking to have FDA revoke that earlier exemption, arguing primarily that FDA’s dietary exposure calculations were wrong and that the exposure to the chemical is actually higher than FDA’s ToR (which figures on 0.5 ppb in the diet). (On the same day, FDA removed the food additive regulation allowing the use of potassium perchlorate in closure-sealing gaskets based on a petition indicating such uses have been abandoned by industry.)

The opponents are now objecting to FDA’s denial of their request, and they’re asking for a formal, evidentiary hearing on the matter. It’s an unusual request — we’ll have to see what FDA’s response will be.

Among FDA’s arguments in denying the petition was that they don’t factor in cumulative exposure from multiple sources when reviewing a ToR exemption, saying “because of the conservative assumptions ordinarily applied in estimating exposure, the cumulative exposure from a limited number of trivial food additive uses is not likely to be more than negligible.”

On another front, opponents of the current legal framework relating to GRAS substances have taken their arguments to federal court.

In the past, opponents have issued reports and tried to rustle public support for their views. Now the Center for Food Safety and Earthjustice have filed a federal lawsuit in New York against FDA, its commissioner Dr. Scott Gottlieb, and the Department of Health and Human Services. (The Center for Food Safety is also involved in the perchlorate actions.)

The GRAS concept is used to provide a legal basis to use substances such as ingredients in foods, but this matters to packaging makers, converters and users, too. That’s because the GRAS concept is frequently employed as the basis for legal compliance of food contact materials, such as packaging, given the exceedingly low levels of dietary exposure involved and the acceptable state of knowledge of their safety.

The plaintiff groups claim that FDA’s recently finalized regulations allowing companies to make their own independent conclusions that substances they put into food are GRAS is an unlawful delegation of FDA’s authority to private parties because it subdelegated to private, self-interested parties the authority given to it by Congress to “protect the public health by ensuring that … foods are safe.”

They claim the setup of the GRAS concept, which they dub the “secret GRAS system,” violates FDA’s main law, the Federal Food, Drug and Cosmetic Act, because by its structure it doesn’t allow manufacturers or FDA to account for cumulative dietary exposure to the substance, so, they say, the analysis leading to the GRAS conclusion is flawed.

The new GRAS rule’s criteria violate that law, they also say, because it permits experts whose opinions form the basis of GRAS conclusions to have conflicts of interest, and it allows consideration of unpublished studies, which don’t meet the law’s standard that GRAS status must be found by qualified experts to be safe and that that fact must be generally recognized as such.

They also assert that FDA’s actions are “arbitrary and capricious,” a traditional no-no under a federal law called the Administrative Procedure Act.

It seems to me the plaintiffs’ complaints are with the structure of the legal framework itself, not the implementation of it. It seems like a stretch to say that the way the FDA implements the GRAS concept, especially via its recently finalized regulations, fails to meet the broad aspirational goals of the statute. After all, the available remedy when one doesn’t like a legal framework is to ask Congress to change it.

Even though the new anti-regulatory federal philosophy didn’t inspire these actions, it very likely gave them new energy. Watch for more actions like them in coming years.

INFORMATIONAL ONLY, NOT LEGAL ADVICE. 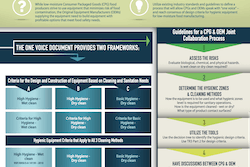