Merger of e-commerce technology and brick and mortar methods could shape the future of modern retail. 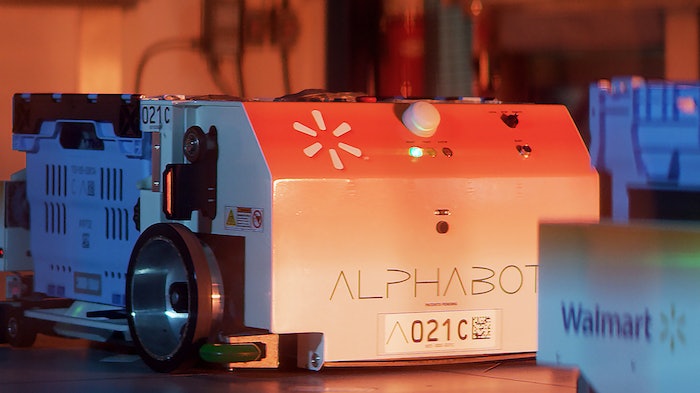 A Walmart supercenter in Salem, New Hampshire, has installed Alphabot, a new technology that helps associates prep online orders faster by using autonomous mobile carts to deliver the items they need from storage to organize, assemble, and deliver the order to the customer's vehicle.

Developed by Alert Innovation for Walmart, Alphabot enables more efficient order picking. The system operates inside a 20,000-sq-ft warehouse-style space, using autonomous carts to retrieve ambient, refrigerated and frozen items ordered online. After it retrieves them, Alphabot delivers the products to a workstation, where a Walmart associate checks, bags and delivers the final order.

While associates will continue to pick produce and other fresh items by hand, Alphabot will help make the retrieval process for other items easier and faster, according to recent Walmart press release.

Walmart’s Senior Manager of Pickup Automation and Digital Operations Brian Roth says Alphabot could fundamentally change Walmart’s online grocery operations. “By assembling and delivering orders to associates, Alphabot is streamlining the order process, allowing associates to do their jobs with greater speed and efficiency,” Roth says. “Ultimately, this will lower dispense times, increase accuracy and improve the entirety of online grocery. And it will help free associates to focus on service and selling, while the technology handles the more mundane, repeatable tasks.

“This is going to be a transformative impact to Walmart’s supply chain,” Roth said. “Alphabot is what we think of as micro-fulfillment – an inventive merger of e-commerce and brick and mortar methods.”

The system’s fully autonomous bots operate on three axes of motion, constituting a more flexible system than is typically found in traditional fulfillment centers and warehouses. Because the carts that carry items move both horizontally and vertically without any lifts or conveyors, there are fewer space constraints to consider, which should make adoption of the system easier across stores.

Real-time data sharing is also a benefit. Because Alphabot continually shares order information, the system will learn – and as it does, stocking will get more intelligent. Adoption of this new system can lead to a more seamless grocery pickup and delivery experience, making substitutions easier to anticipate and fill.

“We never want to be in a position to tell an online grocery customer they can’t have an item,” Roth says. “We’ll be able to look at datasets and fairly say ‘these two brands of pasta are typically bought together,’ or ‘here’s an item a consumer buys often,’ and use that information to make more informed substitutions.”

Alphabot has been operating at its pilot location in Salem since mid-2019. The store will continue to serve as Alphabot’s home while the process is refined. After collecting associate and customer feedback, next steps for a broader Alphabot rollout will be assessed. Until then, the system will continue to assist associates in Salem as they usher in a new era of productivity and service that could shape the future of modern retail, according to Walmart.

Take Five Video: As processing and packaging come together as an integrated system, it’s more important than ever to bring them under one roof. Also covered: NAM initiatives reach out to minority communities to fill the demand for a quality workforce.
Melissa Griffen
Joyce Fassl
Jul 30th, 2021

With 67% of beverage manufacturers planning to eventually add additional packaging equipment to their operations, flexibility is the key element that is needed in new machinery.
Kim Overstreet
Jul 30th, 2021

World's most comprehensive packaging and processing show in 2021 will proceed without any further restrictions on gatherings or capacity limits.
Sean Riley
Jul 28th, 2021

Buyout fund CVC will pay approximately $648 million for the Panzani dry pasta, couscous, sauces, and semolina business, along with all the operating assets (including plants and mills) related to the brands.
Morgan Smith
Jul 27th, 2021

Product safety demands and active health management are two areas that have increased since the start of the pandemic, and the results on the beverage industry will likely be long-term.
Kim Overstreet
Jul 26th, 2021

With a new contract to serve increasing food pantry needs amid the pandemic, the maker of ready-to-eat foods and various powdered products chose a VFFS bagger and auger combination to help improve efficiency as well as sanitation.
Aaron Hand
Jul 23rd, 2021

Aaron Hand Promoted to Editor in Chief of ProFood World

Manufacturers are being pressed to readjust strategies or accelerate previously made plans in order to address the e-commerce channel surge and meet related demands.
Kim Overstreet
Jul 15th, 2021

The company’s 2020 Sustainability Report includes the five-year results of its 2015 sustainability goals and new global targets that will guide its sustainability strategy over the next decade and beyond.
Morgan Smith
Jul 14th, 2021

The company was awarded the 2021 Green Ole Award by the Batavia Environmental Commission for making the city more “eco-friendly” through operational initiatives that resulted from its strategic and collaborative partnership with global CPG Danone.
Kim Overstreet
Jul 12th, 2021

The site will cover the North American market, stocking the most critical parts to optimize maintenance cycles, and assuring a rapid response if any corrective work needs to be done in the field.
ABC Compressors
Jul 8th, 2021

The company will be investing a total of $282 million on projects to expand manufacturing operations at its existing King William County, Va., Purina PetCare and Nestlé’s Gaffney, S.C., facilities.
Morgan Smith
Jul 6th, 2021

The election of external members to the board is expected to strengthen CRB’s business and financial reach while attracting critical outside guidance to support its growth.
CRB
Jul 6th, 2021

The acquisition of Bakon will strengthen LINXIS Group’s expertise and enable LINXIS Group and its companies to address larger markets, both in terms of activities and geography.
Morgan Smith
Jul 5th, 2021