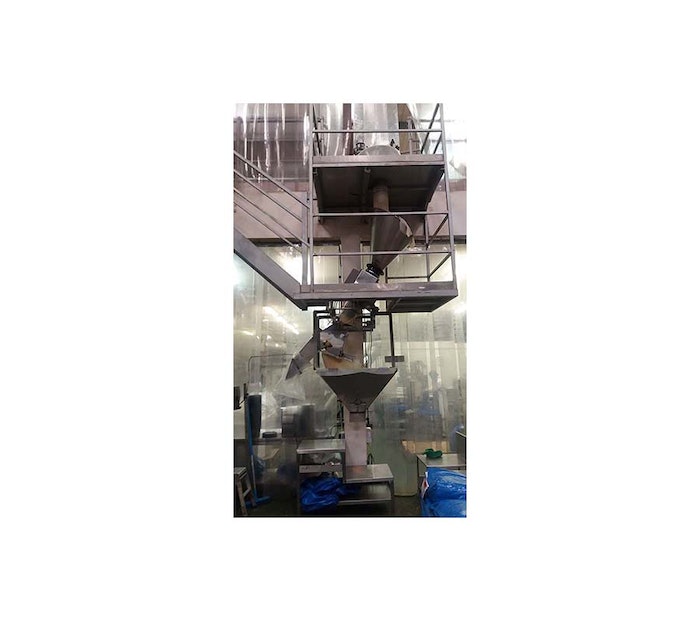 Levantine installed the Stealth Gravity Metal Detector with solid fixings to ensure it is securely held in place and away from busy parts of the plant floor to prevent vibrations and electrical interference from adversely affecting the accuracy of the metal detector.
Photo courtesy of Fortress Technology.

When London, U.K.-based Levantine decided to enter the U.S. market, the global processor of seeds and nuts knew it would have to contend with the country’s stringent food safety regulations. To help meet those requirements, Levantine decided to upgrade its metal detectors to inspect its bulk bagging line with precision, reliability, and speed.

Levantine has used Stealth Gravity Metal Detectors from Fortress Technology since 2013 as part of its production line. The metal detectors have helped the company process about 10 tons of baked, caramelized, seasoned, and raw nuts and seeds daily for its own brand and other brands across the globe. Levantine’s products include almond nibbed pralines, raw cashews, caramelized hazelnuts, baked pumpkin seeds and raw sunflower seeds. While the company does supply retail portion packs, the majority of its business involves bulk supply of nuts and seeds to other food processors, including snack brands, chocolatiers and ice cream manufacturers. Bulk bags are filled in weights of 12.5 kg, 15 kg, 25 kg and even 1 ton.

To prepare for bulk exports to the U.S., Levantine upgraded to the latest version of the Stealth Gravity Metal Detectors that it had purchased five years earlier. According to David Danil, managing director of Levantine, the existing Stealth metal detectors deliver speed, sensitivity, and accuracy that meet strict food safety regulations in both the U.K. and Europe, so the company was confident the new metal detector could do the same as it sought to meet key FDA requirements. “We installed a further line and wanted to obtain the same level of reliability and accuracy,” Danil says.

“We have HACCP (hazard analysis and critical control point) assessments, with metal contaminant detection high up on the list of control points,” he says. “Sensitivity levels are hugely important, and the Fortress equipment exceeded those requirements, too.”

To save on space, Levantine installed the new Stealth metal detector midway between the first floor and mezzanine. Workers control it from a remote panel at operator level.

Levantine appreciates the speed and precision of the metal detector’s reject system, which accurately targets and removes contaminants without taking excessive amounts of uncontaminated product with it.

“In terms of the reject mechanism, we knew that this system did the job for us,” Danil says. “The speed is adjustable via a pressure-reducing valve, depending on the weight and speed of the product.”

According to Danil, the Stealth metal detector has also been able to overcome the “product effect,” a phenomenon in which metal detectors generate a false reject set off by salt, oils, and other seasonings, which mimic the presence of metal contaminants. “The impact of this ‘wet’ product effect has been minimal for us with the Stealth Gravity detector,” he says. “The machine settings can be adjusted to read the product accurately.

“Typically, we’re only likely to get a false reject where there’s a clump of product, salt, or herbs, for example,” Danil adds. “It’s not a big issue for us.”

Have a significant increase in both surface gauss value and pull test strength
Eriez
Jan 18th, 2022