Air rinsing gets spiced up

When this Iowa spice company moved to a more contemporary and efficient air rinsing system for glass bottles in three different sizes, it also upgraded date coding and code inspection. 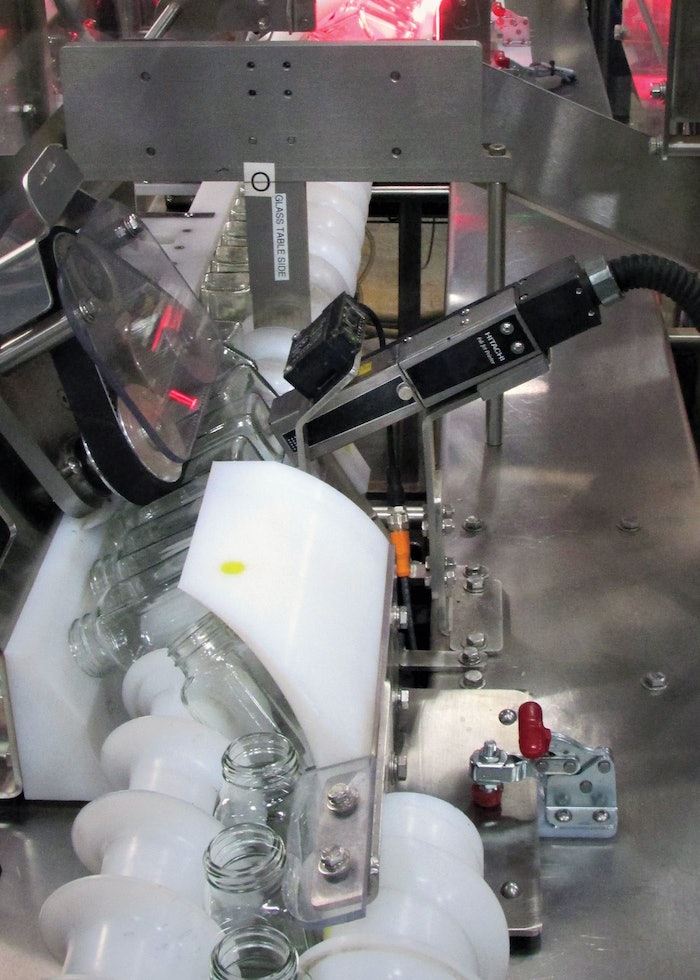 Paired timing screws partially invert bottles so their bottoms can be imprinted by the CIJ coder.

The idea for the upgrade got started when the firm decided it was time to give up on an existing air rinser whose useful life was clearly at an end. “It was starting to require a lot of maintenance to keep it from breaking down,” says David Ovenshire, Process Engineer. Online research and a conversation or two with other engineers at the plant led Ovenshire in fairly short order to Morrison Container Handling Solutions. The system Morrison provided uses timing screws to invert single-filed bottles, pass them over an air jet that blows out any unwanted dust or particles, and then returns the bottles to an upright position so they can proceed to filling.

“As I got talking with Dustin Lee at Morrison about what it was we were trying to do, we mentioned some ideas about relocating the code dater and adding automatic code verification,” says Ovenshire. “Before you knew it we had a concept for all three pieces of equipment that we really liked.”

The Morrison air rinser is anything but off the shelf. Ovenshire explains. “We needed to run three different bottles: large square, small square, and rounds. What Morrison came up with is three sets of paired feed screws that can be quickly changed according to which bottle we’re running, and the change requires no tools.” Also part of the Morrison system is an outfeed screw that is the same for all three bottle types.

“The other thing we wanted to take a good look at,” continues Ovenshire, “is code dating. The code is printed on the bottom of the bottle, and we had always had the coding unit located at the end of the line, after filling and capping. But this meant that if we overfilled even the slightest bit, some of that product would fall onto the conveyor before the cap was applied. Once on the conveyor, the product always managed to find a way to drop onto the print head, which was located under that conveyor. This caused a number of problems and stoppages so that the print head could be cleaned.”

The solution was to move the Continuous Ink Jet coder upstream and integrate it into the Morrison system. “One thing about the Morrison solution that I really like is that by making the feed screws the things that get changed in going from one bottle size to another, the center line down which bottles move never changes,” says Ovenshire. “That means the ink jet coder stays right where it is, which leads ultimately to increased accuracy and legibility.”

Bottle infeed
Operators dump bottles from corrugated reshippers onto a sorting table that moves them into a single-lane infeed conveyor leading to the paired Morrison feed screws. The Morrison system partially inverts them so that their bottoms are in a 10 o’clock position as they move past a new RX2 continuous ink-jet coder from Hitachi. “We were familiar with Hitachi from past experience on other lines here in the plant,” says Ovenshire. “So it made sense to stick with what we’re familiar with.”

With date codes in place, a single Morrison feed screw now carries the bottles over the Fuji Electric air blower integrated into the system by Morrison. Filling is next, but not before a Cognex vision system inspects for presence of the date code information. “We’ve done some label verification with Cognex and the experience was a good one,” says Ovenshire when asked why pick Cognex.

The bottles then move into an All-Fill 32-pocket auger filler followed by the application of a friction-fit plastic sifter seal and then a threaded closure. The sifter seal is applied by a Resina machine and the closure by a machine from Kaps-All Packaging Systems.

At this point the bottles pass through another Cognex inspection system to make sure the lid is on correctly and then through a metal detector from Peco | InspX. The final machine in the line is a pressure-sensitive labeler from Accraply. Finished bottles are returned to their corrugated reshippers by hand.