Worldwide meat leader decides to enter the aquaculture market, following the U.N.’s Food and Agriculture Organization’s forecast that per capita consumption of fish is to set grow by 5% globally over the next 10 years. 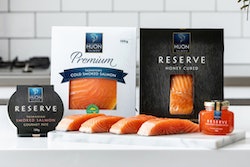 JBS has agreed to buy Huon Aquaculture, Australia’s second-largest salmon producer, for more than $400 million, following a six-month strategic review and auction run by Huon and its advisers Grant Samuel and Ashurst. Huon has 13 production sites and three value-added product processing units that are included in the deal. The transaction already has been approved by controlling shareholders and is expected to close by the end of this year.

“This is a strategic acquisition, which marks the entry of JBS into the aquaculture business,” says Gilberto Tomazoni, global chief executive officer of JBS. “Huon has 33 years of experience in sustainable production, superior technology, and superior quality products widely recognized by the Australian consumer, in an industry with excellent growth prospects worldwide. We will repeat what we did previously with poultry, pork, and value-added products—to make our portfolio even more complete. Aquaculture will be a new growth platform for our businesses.”

According to data from the United Nations’ Food and Agriculture Organization, per capita consumption of fish is forecast to grow 5% globally over the next 10 years. In Oceania and China, the rate is projected to reach 7% and 15%, respectively, over the same time period.

In March of this year, JBS Brazilian subsidiary Seara Foods announced it was beginning to distribute products in the fish and seafood segment, with products like salmon, tilapia, shrimp, and others. With the Huon acquisition, JBS will have its own production.

JBS has had a presence in Australia since 2007, when it acquired the operations of Swift. It also has a beef cattle processing unit at Longford in Tasmania.

Siwak will be responsible for driving the strategic growth of Ferrero’s expanding market share and transitioning the business from being part of an international region to its own distinct area.
Morgan Smith
Sep 7th, 2021

The new Heat and Control 120,000-sq-ft site will expand support for the North American manufacturing industry and will meet increased pre-sale and after-market needs.
Heat and Control, Inc.
Aug 30th, 2021

Montagna takes on leadership of Bonduelle’s wholly owned U.S. subsidiary as it moves ahead toward becoming B Corp certified under the B! Pact framework by 2025.
Morgan Smith
Aug 27th, 2021

The company is investing $300 million in the fully cooked facility to meet increasing demand and accelerate its brand growth.
Morgan Smith
Aug 26th, 2021

The acquisition of chocolate maker Aalst will expand Cargill’s Asia-Pacific cocoa and chocolate offerings, allowing the company to better serve its industrial and foodservice customers in the region.
Morgan Smith
Aug 24th, 2021

The project and a previously announced expansion in LaFayette, La., are part of the company’s long-term investment strategy to meet the growing demand of customers along the Gulf Coast.
Morgan Smith
Aug 23rd, 2021

Worldwide meat leader decides to enter the aquaculture market, following the U.N.’s Food and Agriculture Organization’s forecast that per capita consumption of fish is to set grow by 5% globally over the next 10 years.
Morgan Smith
Aug 10th, 2021

Sanderson Farms Being Sold to Cargill and Continental Grain

Vertical Start-ups Are Needed Now More Than Ever

There is an exceptional opportunity for consumer packaged goods companies and OEMs to use proven best practices as a basis for developing a successful capital project delivery strategy on every project.
Stephen Schlegel
Aug 9th, 2021

The transaction will allow the company to concentrate on growing its current portfolio of diverse offerings, such as healthier snacks, zero-calorie beverages, and products like SodaStream.
Morgan Smith
Aug 4th, 2021

Buyout fund CVC will pay approximately $648 million for the Panzani dry pasta, couscous, sauces, and semolina business, along with all the operating assets (including plants and mills) related to the brands.
Morgan Smith
Jul 27th, 2021

Allpax, a product brand of ProMach, completed its move to a new facility in Covington, La.— doubling the size of its offices and manufacturing area from 40,000 to 86,000 sq-ft.
Allpax Products
Jul 23rd, 2021

The company has promoted 2 long-tenured company veterans, naming Ulrich Bartel as the president of Coperion and Markus Parzer as president of the company’s Polymer Division.
Morgan Smith
Jul 20th, 2021