The growing demand for fresh products emphasizes the need for quality control at every step, and chilling technology is a key part of improvement. 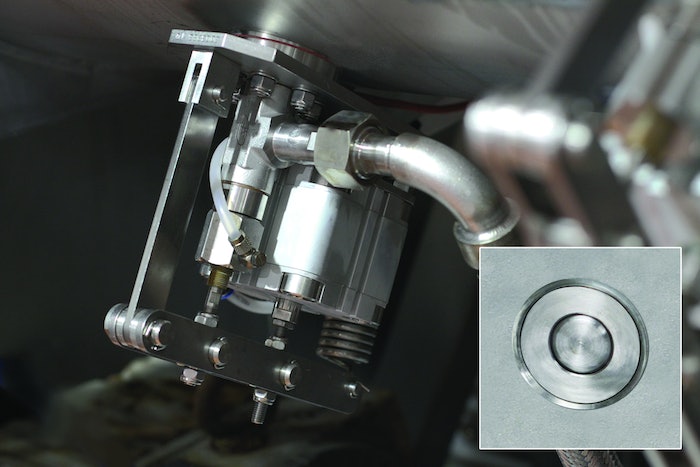 Messer’s proprietary injector for bottom-injection mixer chilling seals against the inside wall of the mixer. It is hygienically designed to prevent the entrapment of food particles in nozzle orifices.

America’s quick-service restaurants continue to roll out advertising that rings the bell for consumers hungry for “fresh” and “never frozen” products, according to Erik Fihlman, food industry program manager at Messer LLC. “While consumers think in terms of healthier eating and quality, meat and poultry processors have specific regulatory definitions which have implications across the cold chain,” he states.

In general, meat and poultry products, whether fresh or ultimately frozen, must be maintained below 40° F at all times. Frozen food products might be processed down to a wide range of temperatures, but for “fresh” and “never frozen” products the control window is very narrow – within about 11° F for red meat, and within about 14° F for fresh poultry, according to Fihlman.

New cryogenic chilling technology, such as Combo Bin Chilling and Mixer Chilling can make a difference as part of a processor’s overall quality and food safety efforts, according to Messer.

To rapidly lower the temperature of raw meat and poultry for bulk shipment, whole muscle and cut meats are loaded into combo bins which are typically covered with dry ice or carbon dioxide (CO2) snow. To further speed equilibration, new automated chillers can gently and evenly layer the CO2 snow as cut products are simultaneously loaded into the combo bin. This not only speeds loading, Fuhlman states, but creates more rapid equilibration and avoids “hot spots” and frozen clumps while reducing purge. As an added benefit, this automated process eliminates labor for shoveling pellets.

Once bulk products are loaded on a truck, the refrigeration system can only control the temperature inside the trailer, but it will have no appreciable impact on the internal temperature of the product, Fuhlman explains. Shipments to and from processing facilities can be affected by extreme weather, so the goal is to ensure chilled products are at the proper equilibrated temperature before being transported.

Chilling at the mixer/blender or grinder is one of the most important points for maintaining the quality of protein products. For this reason, major meat and poultry processors use cryogenic bottom-injection (BI) systems that chill from the bottom of a mixer/blender with CO2 or liquid nitrogen. Yet with any production system, as product throughput increases and equipment is pushed to the maximum, it becomes more difficult to maintain tight process control, says Fihlman. This is especially true with older equipment. “In responding to the “fresh” trend, the focus becomes how to further optimize the efficiency of BI chilling systems,” explains Fihlman

Mixing naturally adds unwanted heat to the product which must be rapidly removed as the chilling process lowers the overall food mass to the target temperature. “The most critical component in the BI chilling system is the cryogenic injector,” states Fihlman. “Yet traditional injectors are prone to plugging. Food particles tend to become entrapped in the nozzle and slowly degrade performance. So, injectors are typically removed daily for disassembly and cleaning, and then reinstalled on the mixer.”

According to Messer, a mixer might have 10 or 12 injectors, and most plants use several mixers, so this requires significant time and labor.

Equally important, when there is a drift in chilling performance, the operator may not notice, or might extend the cycle time and overcompensate, adds Fihlman. Extra mixing time adds another variable to the process and another expense. Beyond wasted cryogen, overworking the protein also affects the texture, and can impact the appearance of trayed products.

“Even if just one injector becomes totally plugged during the day, it creates an area of warmer product. Batch chilling performance will drop sharply,” says Fihlman. Warmer product can also plate out on blades and blender walls, which adds to batch turnaround times.

Messer examined these issues and developed the KRYOJECTORTM cryogenic injector for high-moisture protein mixes in the U.S. food industry. The new injector design is now an integral part of its advanced BI chilling process, which also features Messer’s SmartChill™ control system. The injectors mount flush to the inside walls of the mixer and provide consistent cryogen flow without interruption. Injectors are hygienically designed to prevent entrapment of food particles in nozzle orifices.

In addition to consistent product temperatures within each batch, consistency from batch-to-batch is also important since it can impact the repeatability of forming and packaging operations. Messer addresses this with its proprietary SmartChill controls on its BI chilling system that ensure consistent delivery of cryogen to all injection points in the mixer, and in the proper ratio for every batch. The automated system takes the operator guesswork out of mixer chilling, according to Messer.

In the end, improvements in the cold chain can help processors operate more efficiently at high volumes and satisfy the growing shift to “fresh, never frozen.”

Cover a wide range of applications that call for large chambers to be evacuated rapidly
Pfeiffer Vacuum
May 2nd, 2022

Cost the same as or less than off-the-shelf models
Xchanger
Apr 11th, 2022

Has an advanced design that offers the longest-lasting yoke and vessel on the market
Hiperbaric - High Pressure Processing
Jan 21st, 2022
More in Heating, Cooling and Freezing

Ovens and Smokehouses Have Sanitary Design

Coating System Has a Shallow Pan That Reduces Processing Times